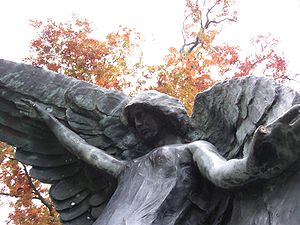 He was born in Osik, Bohemia (now Czech Republic) on March 22, 1882 to a clergyman, Joseph Korbel and his wife Katherina Dolezal Korbel. He began studying sculpture in his homeland, continuing his studies after moving to the United States at age 18. He returned to Europe and continued his studies in Berlin, Munich and Paris.[1]

He was one of a dozen sculptors invited to compete in the Pioneer Woman statue competition in 1927,[2] which he failed to win.

Korbel was a member of the National Sculpture Society.[3] He was elected into the National Academy of Design in 1937 as an Associate member and became a full Academician in 1944. 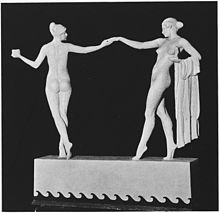 His sculpture can be found at:

as well as at several sites in the Czech Republic.

As a medallist Korbel designed a medal struck by the Medallic Art Company New York about Nazi Germany occupying Bohemia and Moravia.[4] That medal was available at the unfinished pavilion of Czechoslovakia of the 1939 New York World's Fair as an award for contributions to the Czech Resistance.