Maria Sophie Amalie, Duchess in Bavaria (4 October 1841, Possenhofen Castle – 19 January 1925, Munich) was the last Queen consort of the Kingdom of the Two Sicilies. She was one of the ten children of Maximilian Joseph, Duke in Bavaria and Princess Ludovika of Bavaria. She was born as Duchess Maria Sophia in Bavaria. She was the younger sister of the better-known Elisabeth of Bavaria ("Sisi") who married Emperor Franz Joseph I of Austria.

In the winter of 1857, at the age of 16, Marie's hand was sought by Francis II, Crown Prince of Naples, Duke of Calabria, and the eldest son of Ferdinand II of the Two Sicilies, King of Naples. The marriage was political, since Ferdinand wished to ally himself with the Emperor of Austria, Franz Josef I, a powerful fellow absolutist. At that time the kingdom was already threatened by revolutionary forces. At that time Marie had not experienced menarche, and underwent treatments to induce menses (Hamann 80). She also had to learn Italian. She was married by proxy. In January 1859 she traveled to Vienna to spend time with her sister before they went to Trieste to formally enter her new kingdom, and say farewell to her family on the Neapolitan royal yacht Fulminante. She set sail for Bari and 3 February 1859 was married there. (Hamann 82).

The last Queen consort of the Two Sicilies, 1859. 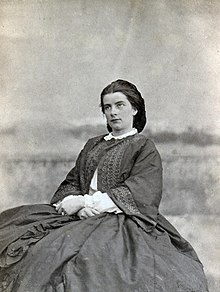 A rare close-up portrait of Maria Sophie - Queen of the Two Sicilies, 1860s.

On 8 January 1859 in Munich at the Allerheiligen-Hofkirche Maria Sophie was married by proxy and then again married in-person on 3 February 1859 in Bari to the Duke of Calabria, the eldest son of Ferdinand II of the Two Sicilies, King of Naples. Within the year, with the death of the king, her husband ascended to the throne as Francis II of the Two Sicilies, and Maria Sophie became queen of a realm that was shortly to be overwhelmed by the forces of Giuseppe Garibaldi and Piedmontese army.

In September 1860, as the Garibaldine troops were moving towards Naples, his capital, Francis II decided to leave the city. At the beginning, he planned to organise a resistance in Capua. However, after that city had also been lost to the Garibaldines in the aftermath of the battle of the Volturnus (October), he and Marie Sophie took refuge in the strong coastal fortress of Gaeta, 80 km north of Naples.

During the Siege of Gaeta in late 1860 and early 1861, the forces of Victor Emmanuel II bombarded and eventually overcame the defenders. It was this brief "last stand of the Bourbons" that gained Maria Sophia the reputation of the strong "warrior queen" that stayed with her for the rest of her life. She was tireless in her efforts to rally the defenders, giving them her own food, caring for the wounded, and daring the attackers to come within range of the fortress cannon.

With the fall of Gaeta and the Kingdom of the Two Sicilies, Maria Sophia and her husband went into exile in Rome, the capital of what for 1,000 years had been the sizeable Papal States, a large piece of central Italy but which, by 1860, had been reduced to the city of Rome, itself, as the armies of Victor Emanuel II came down from the north to join up with Garibaldi, the conqueror of the south. King Francis set up a government in exile in Rome that enjoyed diplomatic recognition by most European states for a few years as still the legitimate government of the Kingdom of the Two Sicilies.

Her wealth and privilege were, to a certain extent, overshadowed by personal tragedies. Her marriage was not consummated for many years, as her husband suffered from phimosis. While in exile in Rome, Maria fell in love with another man, may be with an officer of the papal guard, and became pregnant by him. She retreated to her parents' home at Possenhofen, where a family council decided that she must give birth in secret to prevent scandal. On 24 November 1862, Maria Sophie gave birth to a daughter in St. Ursula's Convent in Augsburg. The child was immediately given to the family of the father. Maria Sophia was forced to promise that she would never see her daughter again. In later life, Maria Sophie suffered from depression, which is believed to have been rooted in this event.[citation needed]

A year later, on the advice of her family, Maria Sophia decided to confess the affair to her husband. Afterwards, the relationship between the two improved for a time. Francis submitted to an operation which allowed him to consummate the marriage, and Maria became pregnant a second time, this time by her husband. Both were overjoyed at the turn of events and full of hope. On 24 December 1869, after ten years of marriage, Marie Sophie gave birth to a daughter, Maria Cristina Pia. Cristina was born on the birthday of her aunt, Empress Elisabeth, who became her godmother. Unfortunately, the baby lived only three months and died on 28 March 1870. Maria Sophie and her husband never had another child.

In 1870, Rome fell to the forces of Italy and the King and Queen fled to Bavaria. The king died in 1894. Maria Sophia spent time in Munich, and then moved to Paris where she presided over somewhat of an informal Bourbon court-in-exile. It was rumored she was involved in the anarchist assassination of King Humbert in 1900 in hopes of destabilizing the new nation-state of Italy. Recent historians have resurrected that rumor based on the apparent credence given to this conspiracy theory by the then Prime Minister of Italy, Giovanni Giolitti. Others regard it as anecdotal. In any event, the case against Maria Sophia is circumstantial.

During World War I, Maria Sophie was actively on the side of the German Empire and Austria-Hungary in their war with the Kingdom of Italy. Again, the rumors claimed she was involved in sabotage and espionage against Italy in the hope that an Italian defeat would tear the nation apart and that the kingdom of Naples would be restored.

During her life, she generated an almost cult-like air of admiration even among her political enemies. Gabriele d'Annunzio called her the "stern little Bavarian eagle" and Marcel Proust spoke of the "soldier queen on the ramparts of Gaeta". She and her sister Elisabeth were considered amongst the great beauties of their age. (Hamann 1986, p. 129)

Maria Sophie died in Munich in 1925. Since 1984 her remains now rest with those of her husband and their daughter in the Church of Santa Chiara in Naples.

This item originated as an abridged and edited version of an article that appears in an online encyclopedia of Naples and has been inserted here by the author and copyright holder of that article.

Media related to Maria Sofia of Bavaria at Wikimedia Commons