listen)) or the Marches[6][7][8] (/ˈmɑːrtʃɪz/ MAR-chiz)[4][9] is one of the twenty regions of Italy. The name of the region derives from the plural name of marca, originally referring to the medieval March of Ancona and nearby marches of Camerino and Fermo. Marche is well known for its shoemaking tradition, with fine and luxurious Italian footwear manufacturing facilities in the region.[citation needed]

The region is located in the Central area of the country, bordered by Emilia-Romagna and the republic of San Marino to the north, Tuscany to the west, Umbria to the southwest, Abruzzo and Lazio to the south and the Adriatic Sea to the east. Except for river valleys and the often very narrow coastal strip, the land is hilly. A railway from Bologna to Brindisi, built in the 19th century, runs along the coast of the entire territory. Inland, the mountainous nature of the region, even today, allows relatively little travel north and south, except by twisting roads over the passes. The Umbrian enclave of Monte Ruperto (a subdivision of the Comune of Città di Castello) is entirely surrounded by the Province of Pesaro and Urbino, which constitutes the northern part of the region. Urbino, one of the major cities of the region, was the birthplace of Raphael, as well as a major center of Renaissance history.

A view of Monte Conero

Marche extends over an area of 9,694 square kilometres (3,743 sq mi) of the central Adriatic slope between Emilia-Romagna to the north, Tuscany and Umbria to the west, and Lazio and Abruzzo to the south, the entire eastern boundary being formed by the Adriatic. Most of the region is mountainous or hilly, the main features being the Apennine chain along the internal boundary and an extensive system of hills descending towards the Adriatic. With the sole exception of Monte Vettore, 2,476 metres (8,123 ft) high, the mountains do not exceed 2,400 metres (7,900 ft). The hilly area covers two-thirds of the region and is interrupted by wide gullies with numerous – albeit short – rivers and by alluvial plains perpendicular to the principal chain. The parallel mountain chains contain deep river gorges, the best known being those of the Furlo, the Rossa and the Frasassi.

The coastal area is 173 kilometres (107 mi) long and is relatively flat and straight except for the hilly area between Gabicce and Pesaro in the north, and the eastern slopes of Monte Conero near Ancona.

Climate is temperate. Inland, in the mountainous areas, is more continental with cold and often snowy winters; by the sea is more mediterranean. Precipitation varies from 1,000 to 1,500 millimetres (40 to 60 inches) per year inland and 600 to 800 mm (25 to 30 in) per year on the Adriatic coast.

Marche was known in ancient times as the Picenum territory. The Picens or Picentes (Ancient Greek: Πίκεντες) were the Italic tribe who lived in Picenum during the Iron Age. Many artefacts from their time are exhibited in National Archaeological Museum of the Marche Region in Ancona. In the fourth century BC, the northern area was occupied by the Senones, a tribe of Gauls. The Battle of Sentinum was fought in Marche in 295 BC; afterwards, the Romans founded numerous colonies in the area, connected to Rome by the Via Flaminia and the Via Salaria. Ascoli was a seat of Italic resistance during the Social War (91–88 BC).

Roman Amphitheatre in the Archaeological Park of Urbs Salvia

Following the fall of the Western Roman Empire, the region was invaded by the Goths. After the Gothic War, it was part of the Byzantine Exarchate of Ravenna (Ancona, Fano, Pesaro, Rimini, and Senigallia forming the so-called Pentapolis). After the fall of the Exarchate, it was briefly in the possession of the Lombards, but was conquered by Charlemagne in the late eighth century. In the ninth to eleventh centuries, the marches of Camerino, Fermo and Ancona were created, hence the modern name.

Marche was nominally part of the Papal States, but most of the territory was under local lords, while the major cities ruled themselves as free communes. In the twelfth century, the commune of Ancona resisted both the imperial authority of Frederick Barbarossa and the Republic of Venice, and was a maritime republic on its own. An attempt to restore Papal suzerainty by Gil de Albornoz in the fourteenth century was short-lived.

The Renaissance town of Urbino 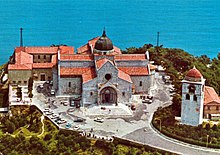 During the Renaissance, the region was fought over by rival aristocratic families, such as the Malatesta of Rimini, Pesaro, Fano and the house of Montefeltro of Urbino. The last independent entity, the Duchy of Urbino, was dissolved in 1631, and from then on, Marche was firmly part of the Papal States except during the Napoleonic period. This saw the short lived Republic of Ancona, in 1797–98; the merging of the region with the Roman Republic in 1798–99, and with the Kingdom of Italy from 1808 to 1813; and the short occupation by Joachim Murat in 1815. After Napoleon's defeat, Marche returned to Papal rule until 4 November 1860, when it was annexed to the unified Kingdom of Italy by a plebiscite.

Towns in Marche were devastated by the 2016 Central Italy earthquake which occurred on 24 August 2016.[12] 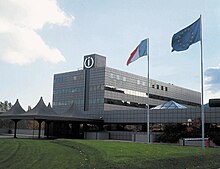 Indesit Headquarters in Fabriano, Province of Ancona. The home appliance sector represents the core of the regional industry

Prior to the 1980s, Marche was considered a rather poor region, although economically stable in some sectors, thanks particularly to its agricultural output and to the contribution of traditional crafts.[13]

Today the contribution of agriculture to the economy of the region is less significant and the gross value generated by this sector remains slightly above the national average. Marche has never suffered from the extremes of fragmented land ownership or 'latifondo'. Greatly diffused in the past, the sharecropping never produced an extreme land fragmentation. The main products are cereals, vegetables, animal products and grapes. Truffle hunting is popular; although it has often led to 'truffle wars' between hunters due to the imposition of quotas. Olives are also produced and managed by various harvesters. In spite of the marine impoverishment, the sea has always furnished a plentiful supply of fish, the main fishing centres being Ancona, San Benedetto del Tronto, Fano and Civitanova Marche.[13]

Since the 1980s the economy of the region has been radically transformed, without however repudiating its rural past. Many of the small craft workshops scattered throughout the rural settlements have modernised and become small businesses, some of which have become major brands known all over the world (Indesit, Tod's, Guzzini, Teuco). This evolution led to the emergence of 'specialised' industrial areas, which are still profitable: footwear and leather goods in a large area straddling the provinces of Macerata and Fermo; furniture in the Pesaro area in particular; household appliances and textile industry in the province of Ancona, in which the main engineering companies are also to be found (including ship building, petrochemicals and paper, as well as consumer durables). The city of Castelfidardo remains an important centre for the production of musical instruments, the accordion in particular. The region continues to draw tourists, whose increasing numbers have been attracted by the rich and broadly distributed heritage of history and monuments, as well as by the traditional seaside resorts.[13]

The population density in the region is below the national average. In 2008, it was 161.5 inhabitants per square kilometre (418/sq mi), compared to the national figure of 198.8/km2 (515/sq mi). It is highest in the province of Ancona (244.6/km2 or 634/sq mi inhabitants per km2), and lowest in the province of Macerata (116.1/km2 or 301/sq mi). Between 1952 and 1967 the population of the region decreased by 1.7% as a result of a negative migration balance, well above the national average, with a rate varying between 4.9 and 10.0 per 1,000 inhabitants. The Average fund of this region is worth about a few million or maybe higher. In the same period the natural balance of the population was positive, but lower than the national average and insufficient to counterbalance the net emigration. The population continued to decline until 1971, but in 1968 began growing again.[15] In 2008, the Italian national institute of statistics (ISTAT) estimated that 115,299 foreign-born immigrants live in Marche, 7.4% of the total regional population.

Marche forms, along with Emilia-Romagna, Tuscany and Umbria, the Italian "Red Quadrilateral", a strongly left-wing area. In the 2014 European elections, the people of Marche gave 45% of their votes to Matteo Renzi's Democratic Party.

It is one of the very few regions in Italy where the right-wing coalition led by Silvio Berlusconi has never been able to have a majority, either in a national election or at the regional level. 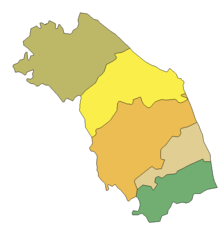