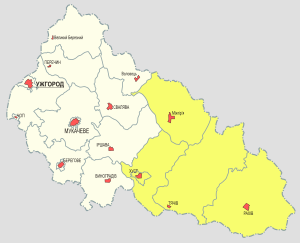 Northern Maramureș as part of the Zakarpattia Oblast of Ukraine

listen); Ukrainian: Мармарощина, Marmaroshchyna; Hungarian: Máramaros) is a geographical, historical and cultural region in northern Romania and western Ukraine. It is situated on the northeastern Carpathians, along the upper Tisa River; it covers the Maramureș Depression and the surrounding Carpathian mountains.

Alternatively, the term Maramureș is also used for the Maramureș County of Romania, which contains the southern section of the historical region.

Name in other languages

Maramureș is a valley enclosed by mountains Oaș, Gutâi, Țibleș and Rodnei (northern section of the Inner Eastern Carpathians) to the west and south, Maramureș Mountains and central section of the Outer Eastern Carpathians to the east and north, with a thin opening at Khust. Several dozen small mountain rivers and creeks flow into the river Tisa. It is forested and not easily accessible.

Its length from Khust to Prislop Pass is about 150 km and width from North to South is up to 80 km.

The main mountain passes linking Maramureș with the neighboring regions are high and in the past were hardly accessible in the winter. Prislop Pass (1,414 m high) links the region in the east towards Moldavia, Dealul Ștefăniței (1,254 m) in the south towards Transylvania, Pintea Pass (987 m) towards Baia Mare, and Fărgău (587 m) in the west towards Oaș Country, while Frasini Pass (Yasinia; 931 m) links the region in the north to Galicia.

The mountains surrounding this region occupy more than half of the area. A few peaks reach above 2,000 m, such as Pietrosul (2,303 m) in the Rodnei Mountains to the south and Hovârla (2,061 m) in Muntele Negru (Cernahora) to the north.

The last wisent from present-day Romania territory, a symbol of Maramureş, was hunted to extinction in 1852. Lostriţa, a local variety of salmon, still live in the mountain rivers.

Several protected areas have been created in Maramureș. Rodnei Mountains National Park was designated in 1930, Maramureș Mountains Natural Park in 2004, and there are many other caves, gorges, cliff formations, and lakes which are officially-protected areas. 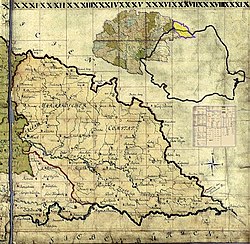 Marmaroscher Comitat on the map of the Habsburg Kingdom of Hungary, 1780-84. The present-day borders of Romania are projected to the historical map.

In ancient times, this area was settled by Celts, Dacians, Sarmatians and Germanic peoples. In the first century BC, it was part of the Dacian Kingdom under Burebista, while in the early Middle Ages, it was ruled by the Hunnic Empire, the Kingdom of the Gepids, the Kingdom of the Avars, the White Croatia and the Kievan Rus'.

The territory was part of the Kingdom of Hungary from the 11th century and was nominally divided between the Gyepű border region, comitatus of Szatmár and comitatus of Borsova. Later, the whole region was included into the comitatus of Máramaros. Initially, the inhabitants of the region were allowed to preserve their native political organization, the Voevodates, which formed many small autonomous areas. The King long struggled[citation needed] to convince the Voivodes to accept the title of Count, with the implied losing independence in political and financial matters. During the Middle Ages, the people in many mountain villages, where each family by definition had a considerable domain, were called nameşi, meaning free peasants taking pride in their family (the origin of the word is disputed, in the Kingdom of Hungary, free people possessing land were called "nemes" in Hungarian, in Romanian neam means extended family).

In the 16th century, medieval Kingdom of Hungary was invaded and destroyed by the Ottoman Empire, and area came under administration of the semi-independent Ottoman Principality of Transylvania and later (in the end of the 17th century) under administration of the Habsburg Monarchy (later known as the Austrian Empire). During Habsburg administration, region was firstly part of the Habsburg Principality of Transylvania, but was later (in 1732) included into the Habsburg Kingdom of Hungary. In 1867, the Austrian Empire was transformed into the dual monarchy of Austria-Hungary and the region was included into the Transleithania or Hungarian part of the Monarchy.

After the First World War, the region was divided between Romania and Czechoslovakia at the territory of Hutsul Republic,[1] while in 1940 the whole area became part of Hungary again and was controlled during World War II until 1944. After World War II, the southern section remained within the Romanian borders and is now part of Maramureș County; the northern section was incorporated into the Soviet Union and is now part of Zakarpattia Oblast of independent Ukraine.

In the northern area most people speak the Ruthene language[citation needed], while in the southern area most speak Romanian, which is why the region was split into two parts.[2][citation needed] Since the 1940s there have been villages cut in two by the state border. There are some villages in the north (within Ukraine) that have a sizeable Romanian population, as well as some villages in Romania that have a sizeable Ukrainian population.