The Islands of Ofu and Olosega viewed from the village of Sili along the north shore of Olosega. The middle peak is Sunuʻitao on Ofu, across the narrow strait at Asaga from Olosega (foreground and mountain on left).

The Manuʻa Islands,[1][2][3] or the Manuʻa tele (Samoan: Manuʻa tele), in the Samoan Islands, consists of three main islands: Taʻū, Ofu and Olosega.[4][5][6] The latter two are now connected by a bridge over the shallow 137-meter-wide Āsaga Strait. The islands are located some 110 kilometers (68 miles) east of Tutuila and are a part of American Samoa, an unincorporated territory of the United States; their area is 56 square kilometers (22 square miles) with a population of 1,400. Taʻu is the biggest island with its 44 km2 (17 sq mi), and harbors the highest point of the Manuʻa at 931 meters (3,054 feet). Politically, the islands form the Manuʻa District, one of the three administrative divisions of American Samoa.

For centuries, Manu'a was the political centre for the region prior to the rise of the Tu'i Tonga maritime empire and the shift in power from the east to the western islands of Samoa.

Map of the Manu'a islands.

All three islands are high islands: volcanic remnants rising out of the sea 14° south of the equator. The islands are elevated and mountainous.[7] In contrast to most places in the world, the population of these islands has been decreasing steadily for decades. In the 1930s some 20% of the population of American Samoa lived in the Manuʻa Islands. By the 1980s, only 6% were located there. Emigration is the consequence of a lack of economic opportunities and a desire of young people to participate in the more modern lifestyle offered on Tutuila (Office of Tourism, 2005). All the land of Manuʻa is owned communally by Samoan families of Manuʻa. This includes the National Parks lands which are only leased to the US National Parks system for 50 years.

Samoan oral historical traditions state that Manu'a was a ruling center of a large Polynesian empire which included all of the Samoan archipelago, and other nearby islands such as Tonga and Fiji.[8] The traditional capital of Manuʻa is the village of Taʻū, on the island of Taʻū.

The sovereign of Manuʻa was called the Tui Manuʻa, the progenitor of many of Samoa's high titles and the only part of Samoa that was not subjected to Tongan rule, owing to its sacred status to both cultures. The last Tui Manuʻa was Tuimanuʻa Elisara (or Tui Manuʻa Elisala) of the early 20th century. Tuimanuʻa Elisara died on July 2, 1909. The title Tui Manuʻa technically still exists although there is no titleholder; Tuimanuʻa Elisara desired before his death that the title die with him. It was the U.S. government position at the time that his title changed to District Governor upon the hoisting of the U.S. flag at Taʻū on June 5, 1900 (Office of the Governor. 2004). However, titles and holdings were not obliterated when the islands became a U.S. territory, and the title and estates of Tuimanuʻa remain under the custody of the Anoalo clan (male side of the Tuimanuʻa line).

These are the known Tui Manu'a: 41 successive generations of title holders spanning over 2,000 years. Note: these aren't all the title holders. 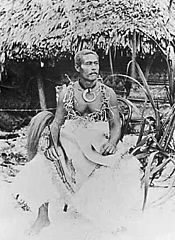 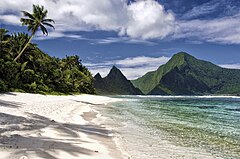 The Manuʻa Group is now part of the US Protectorate of American Samoa. Following Tutuila's signing in 1901, Manu'a was eventually forced to accept U.S. rule in a Deed of Succession, signed by the Tui Manuʻa (supreme chief of Manuʻa) on July 16, 1904 at the Crown residence of the Tuimanuʻa called the Faleula in the place called Lalopua (from Official documents of the Tuimanuʻa government, 1893; Office of the Governor, 2004). Cession followed the Tripartite Convention of 1899 that partitioned the eastern islands of Samoa (including Tutuila and the Manuʻa Group) from the western islands of Samoa (including ʻUpolu and Savaiʻi).

The history of Manuʻa is said in Samoan oratory to contain the origins of Samoan and Polynesian culture, and the genealogy of Polynesians east of Samoa is said to have originated in Manuʻa. In traditional belief the sun rises over Samoa at Saua on the island of Taʻū, where the coral reef is supposed to be always yellow from the sun, and it sets at Falealupo the western-most village on the island of Savaiʻi in Samoa. This journey of the sun is strongly related to traditional beliefs and defines the uniformity of cultural identity across both Samoas. The term Fa'asamoa describes "The Samoan Way", or traditional Samoan way of life

Today, many families of Manuʻa rely on income from family members working in Tutuila and in the United States. The local diet is generally healthier than in Tutuila, with less reliance on imported American and New Zealand tinned foods, and a greater reliance on local fishing and farming.

The people of Manuʻa speak the Samoan language and utilize the "t".

The high school on Taʻū, called Manuʻa High School, serves all of Manuʻa. Most students seeking higher education go to American Samoa Community College in Tutuila or National University of Samoa on ʻUpolu, or as far away as the University of Hawaiʻi and elsewhere.[citation needed]