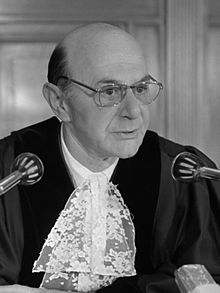 Lachs in 1974 as an International Court of Justice judge

Manfred H. Lachs (April 21, 1914 in Stanislav, Austrian Galicia – January 14, 1993 in Den Haag) was a Polish diplomat, Judge on the International Court of Justice, and jurist who greatly influenced the development of international law after World War II.

Lachs attended the Cracow Jagiellonian University where he earned a doctorate in Laws (1937). Right after his studies, he started working for the Consular Academy of Vienna and afterwards in the London School of Economics. Lachs was drafted in the army and throughout his military service he was advisor to the Polish government.

Before his career turned toward international laws, he filled many judiciary posts in the Polish government such as Poland's Foreign Affairs director of the Department of treaties and legal jurisdiction (1947–1960) and prime minister's special advisor (1960–1967). During the Paris' Peace conference of 1946, Lachs stood for his country as a delegate. He later became a professor of international law at the University of Warsaw (1952–1993), and served as a member of the Polish delegation of the general assembly of the United Nations.

Afterwards, Lachs became a judge on the International Court of Justice, and eventually became one of the longest-serving judges there, working from 1967 until 1993, and presiding it from 1973 to 1976. He wrote The Law of Outer Space: An Experience in Contemporary Law Making in 1972, and the Teacher in International Law is 1982.

After his death, the Manfred Lachs Space Law Moot Competition[1] was named in his honour by the International Institute of Space Law.