Malmö Municipality (Swedish: Malmö kommun), or City of Malmö (Malmö stad), is a municipality in Scania, the southernmost Swedish province.

In 1971, the city was also converted into a municipality of unitary type, like all others in Sweden. Malmö Municipality, however, styles itself Malmö stad (City of Malmö) in all cases when it is legally possible. This is a decision taken by the municipal assembly. It is purely nominal and has no effect on the legal status of the municipality.

As of 2015, there were six urban areas (tätort or locality) and six smaller settlements (småorter) in the municipality.[3]

The localities are listed in the table according to the size of the population in 2018.[4] Note that a small part of Malmö (Arlöv) is situated in Burlöv Municipality. 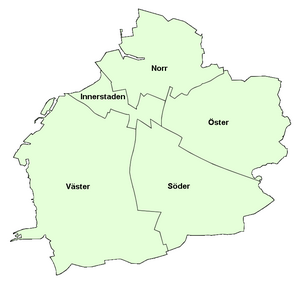 After a reform on 1 July 2013, Malmö Municipality is divided into five city districts (Swedish: stadsområde).[5][6] They manage public kindergartens, schools, and geriatric care within their geographical areas, and provide funds for local cultural and recreational activities. 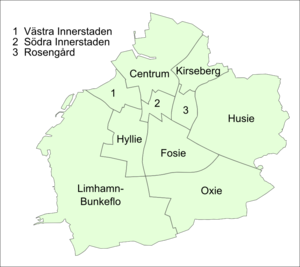 Västra hamnen (Norr) on the left and Ribersborgsstranden (Innerstaden) on the right side, separated by Turbinkanalen at the center

As of 2019[update], Malmö has town twinning treaties or treaties of co-operation signed with 11 cities. Of these, cooperation is closest with Newcastle and Tallinn. The complete list of cities is the following (twinning year in parenthesis):[13]