Malindi (known as Melinde in antiquity) is a town on Malindi Bay at the mouth of the Galana River, lying on the Indian Ocean coast of Kenya. It is 120 kilometres northeast of Mombasa. The population of Malindi was 119,859 as of the 2019 census.[1] It is the largest urban centre in Kilifi County.

Tourism is the major industry in Malindi. The city is popular among Italian tourists. Malindi is served with a domestic airport and a highway between Mombasa and Lamu. The nearby Watamu resort and Gedi Ruins (also known as Gede) are south of Malindi. The mouth of the Sabaki River lies in northern Malindi. The Watamu and Malindi Marine National Parks form a continuous protected coastal area south of Malindi. The area shows classic examples of Swahili architecture. The majority of Malindi's population is Muslim.[2] 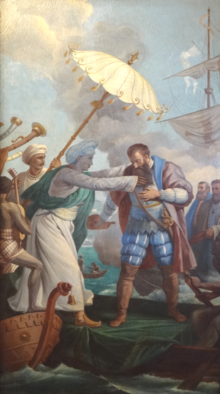 Portuguese explorer Vasco da Gama meeting with the King of Malindi in 1498. The Portuguese Empire ruled Malindi from 1500 to 1630.

Malindi developed as part of the emerging Swahili Civilization in the 5th–10th centuries. Bantu-speaking farmers moved into the area, where they smelted iron, built timber and wattle houses thatched with palm leaves, spoke a local dialect of kiSwahili, and engaged in regional and sometimes long-distance trade. The resurgence of the Indian Ocean trade networks at the end of the first millennium led to larger settlements, increased long-distance trade, and greater social complexity. Beginning in the 11th century, the Swahili along the coast were acting as middlemen for Somali, Egyptian, Nubian, Arab, Persian, and Indian traders. They began building walled towns, coral houses, and elites converted to Islam, often speaking Arabic.[3]

The Malindi Kingdom appears to have been formed around the 9th century AD, and to have grown powerful in the two centuries before Vasco de Gama ushered in Portuguese colonization of the region, the latter leading to the decline of the civilization. The city of Malindi, founded around 850 AD, was in a somewhat more northerly location than the modern city, and appears to have been destroyed around 1000 AD. There are sparse signs of habitation for the next two centuries, then recovery and prosperity in the 1200s.

The first written reference to the present day Malindi likely comes from Abu al-Fida (1273–1331), a Kurdish geographer and historian. He wrote that Malindi is situated to the south of the mouth of the river, which begins in the Mountain of Comr hundreds of kilometres away. This mountain may be Mount Kenya, where Galana River originates. Therefore, Malindi has existed as a Swahili settlement since at least the 13th century.[4]

Once rivalled only by Mombasa for dominance in this part of East Africa, Malindi has traditionally been a port city. In 1414, the town was visited by the fleet of the Chinese explorer Zheng He. Malindi's ruler sent a personal envoy with a giraffe as a present to China on that fleet.[4]

The Portuguese explorer Vasco da Gama met Malindi authorities in 1498 to sign a trade agreement and hire a guide for the voyage to India, when he erected a coral pillar. Vasco da Gama was given a warm reception from the Shiek of Malindi, which contrasted with the hostile reception he encountered in Mombasa.[4] The pillar stands to this day, though there have been calls by conservationists to take care of it, since soil erosion might make the pillar fall into the ocean. It is a fairly popular tourist attraction for both local and international tourists.

In 1498 Malindi was a prosperous town with a population between 5,000 and 10,000. The majority of the population was Muslim by this period, having converted largely between the 13th and 14th centuries. Like other Medieval Swahili towns, the ruling class or wazee was made up of the heads of the wealthiest patrician families. Similar to other Bantu-speaking peoples, these clan leaders elected a mwenye mui or chief who spoke on behalf of the patricians. The Portuguese mistakenly titled these individuals "Kings," misunderstanding the nature of Swahili political organization. The wazee spoke both Swahili and Arabic, and claimed mythological origins from the East, most often Persia.[5]

Malindi's main source of prosperity was the export of ivory and rhino horns as well as exporting agricultural products such as coconuts, oranges, millet and rice.[4] In the years before the arrival of the Portuguese, Malindi was a regional power but lagged significantly behind the two greatest states, Mombasa and Kilwa. When, in 1499, the Portuguese established a trading post in Malindi that served as a rest stop on the way to and from India, they were eagerly welcomed by the wazee who sought to use the Portuguese military might to establish themselves over their rivals in Mombasa. In 1500, King Dom Manuel I offered vassal status to Malindi. Malindi supported Portugal's successful efforts to conquer Kilwa and Mombasa in 1505. In 1509 the Portuguese established a factory (custom house) in Malindi, which they abandoned in 1512. The decline of Kilwa and Mombasa led to Malindi's flourishing. Malindi grew as other Swahili, as well as Arab, Persian, and Indian, merchants, craftsmen, sailors, and laborers flocked to newly powerful city.[6]

Malindi remained the centre of Portuguese activity in eastern Africa until 1593 when the Portuguese moved their main base to Mombasa. After that the town gradually declined until it almost disappeared by the end of 17th century. In 1845 Ludwig Krapf visited the town and found it overgrown by vegetation and uninhabited.[4] A Portuguese chapel with a graveyard was built before 1542 when Francis Xavier visited the town.[4] Many buildings of Swahili architecture survive, including the Juma Mosque and palace on the beach.

Malindi was conquered by Sultan Majid of Zanzibar in 1861 and until the end of 19th century served as a center of the slave trade. In 1890 Malindi came under British administration. The British abolished both the slave trade and slavery. This act led to a significant decline in agricultural production. Outside agriculture there were few industries in Malindi at the beginning of the 20th century; among them were making mats and bags, crushing sesame seeds for oil and producing a Swahili drink called tembo. Malindi was officially made a town in 1903. Ten years later its population stood at around 1148 and included eight Europeans, 67 Asians, 230 Arabs and 843 Africans.[4]

A view of the old town of Malindi

Malindi experienced a trade boom between the end of the World War I and 1925, when a famine occurred. Exports to foreign ports grew to £26,000 by 1924. Europeans started to return to Malindi in the 1930s, buying land from Arabs. Some of them like Commander Lawford opened the first hotels, which became the foundation of the future tourist industry. During World War II Malindi was one of only two towns in East Africa bombed by the Italians. This happened on 24 October 1940, and after this event allied troops were stationed in the town until the end of the war. After the World War II Malindi began developing into a resort.[4]

Most of the events in the novel “Our Wild Sex in Malindi” (by Andrei Gusev) take place in Malindi and Lamu. The novel describes a few years living in the suburb of Malindi russian writer Andy and his wife, Jennifer, who was born in Kenya.[11][12][13]