ISBN (identifier) New Guinea Luzon
This article is about the archipelago. For the book, see The Malay Archipelago.

The Malay Archipelago (Malay: Kepulauan Melayu, Tagalog: Kapuluang Malay, Cebuano: Kapupud-ang Malay, Javanese: Nusantara Melayu) is the archipelago between mainland Indochina and Australia. It has also been called the Malay world, Nusantara, East Indies, Indo-Australian Archipelago, Spices Archipelago and other names over time. The name was taken from the 19th-century European concept of a Malay race, later based on the distribution of Austronesian languages.[3]

Situated between the Indian and Pacific Oceans, the archipelago of over 25,000 islands and islets is the largest archipelago by area and fourth by number of islands in the world. It includes Brunei, East Malaysia, East Timor, Indonesia, Papua New Guinea, and the Philippines.[4][5] The term is largely synonymous with Maritime Southeast Asia.[6]

The term was derived from the European concept of a "Malay race" (the Austronesian peoples),[3] a racial concept proposed by European explorers based on their observations of the influence of the ethnic Malay empire, Srivijaya, which was based on the island of Sumatra, Indonesia.[7] However, the Malay Archipelago does not include all islands inhabited by the Malay race such as Madagascar and Taiwan, and it includes the islands inhabited by Melanesians such as Maluku Islands and New Guinea.

The 19th-century naturalist Alfred Wallace used the term "Malay Archipelago" as the title of his influential book documenting his studies in the region. Wallace also referred to the area as the "Indian Archipelago" and the "Indo-Australian" Archipelago.[8][9] He included within the region the Solomon Islands and the Malay Peninsula due to physiographic similarities.[3] As Wallace noted,[10] there are arguments for excluding Papua New Guinea for cultural and geographical reasons: Papua New Guinea is culturally quite different from the other countries in the region, and it is geologically not part of the continent of Asia, as the islands of the Sunda Shelf are (see Australia).

The archipelago was called the "East Indies"[11] from the late 16th century and throughout the European colonial era. It is still sometimes referred to as such,[4] but broader usages of the "East Indies" term had included Indochina and the Indian subcontinent. The area is called "Nusantara" in the Indonesian language.[12] The area is also referred to as the "Indonesian archipelago".[13][14] The term "Maritime Southeast Asia" is largely synonymous, covering both the islands in Southeast Asia and nearby island-like communities, such as those found on the Malay Peninsula.[15]

Insulindia is a somewhat archaic geographical term[16][17][18] for Maritime Southeast Asia, sometimes extending as far as Australasia.[19] More common in Portuguese and Spanish,[20][21][22] it is also sometimes used in art history or anthropology to describe the interface zone between the cultures of Oceania and Southeast Asia.[23]

Insulindia is used as a geopolitical term in academic discussions of the former European colonial possessions within Maritime Southeast Asia, especially Dutch East Indies and Portuguese East Indies ("Portuguese Insulindia")[24] much as former French colonial possessions in Southeast Asia are still termed French Indochina.[25] It is also used to describe and locate the Chinese cultural diaspora (the "insulindian Chinese")[26] across the islands of Southeast Asia.[27]

One of the majority of uninhabited islands of the Philippines.

The major island groupings in the Philippine Archipelago include Luzon, Mindanao, and the Visayan Islands.

The seven largest islands are New Guinea, Borneo, Sumatra, Sulawesi and Java in Indonesia; and Luzon and Mindanao in the Philippines.

Geologically, the archipelago is one of the most active volcanic regions in the world. Producing many volcanoes especially in Java, Sumatra and Lesser Sunda Islands region where most volcanoes over 3,000 m (9,843 ft) situated. Tectonic uplifts also produced large mountains, including the highest in Mount Kinabalu in Sabah, Malaysia, with a height of 4,095.2 m and Puncak Jaya on Papua, Indonesia at 4,884 m (16,024 ft). Other high mountains in the archipelago include Puncak Mandala, Indonesia at 4,760 m (15,617 ft) and Puncak Trikora, Indonesia, at 4,750 m (15,584 ft).

The climate throughout the archipelago is tropical, owing to its position on the Equator. 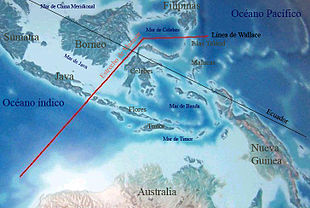 Wallace Line between Australian and Southeast Asian fauna. The deep water of the Lombok Strait between the islands of Bali and Lombok formed a water barrier even when lower sea levels linked the now-separated islands and landmasses on either side.

Wallace used the term Malay Archipelago as the title of his influential book documenting his studies in the region. He proposed what would come to be known as the "Wallace Line", a boundary that separated the flora and fauna of Asia and Australia. The ice age boundary was formed by the deep water straits between Borneo and Sulawesi; and through the Lombok Strait between Bali and Lombok. This is now considered the western border of the Wallacea transition zone between the zoogeographical regions of Asia and Australia. The zone has a mixture of species of Asian and Australian origin, and its own endemic species.

The major archipelagos and islands are:

Over 380 million people live in the region, with the 10 most populated islands being the following:

The people living there are predominantly from Austronesian sub-groupings and correspondingly speak western Malayo-Polynesian languages. The main religions in this region are Islam (62%), Christianity (33%), as well as Buddhism, Hinduism, Taoism and traditional folk religions.

Culturally, the region is often seen[who?] as part of "Farther India" or Greater India—the Coedes' Indianized states of Southeast Asia refers to it as "Island Southeast Asia".[29]