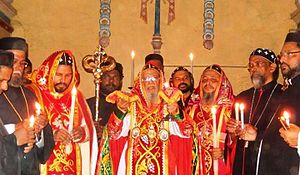 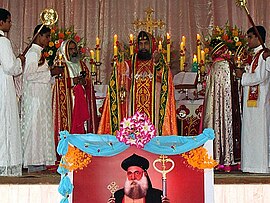 Holy Qurbono being celebrated in the Syro-Malankara Catholic Church

The West Syriac Rite developed out of the ancient Antiochene Rite, emerging in the 5th and 6th century with the adoption of Syriac, rather than Greek, as the liturgical language of the non-Chalcedonian Patriarchate of Antioch.[1] The liturgy was further revised and expanded over the centuries as the Syriac Orthodox Church of Antioch emerged as a fully distinct church, reaching its "classical" form in the 12th century under Patriarch Michael the Syrian.[1]

West Syriac liturgy was first introduced to India by the mission of Gregorios Abdal Jaleel, the Syriac Orthodox Bishop of Jerusalem, who arrived in 1665.[2][3] Historically, not wanting to accept the historical reality of Syrian migration, which happened in 345, under the leadership of Bishop Joseph and the trader Thomas of Canna, a group of Indian Christians in the Church of the East accepted Nestorianism, centred in Persia, practiced a variant of the East Syriac Rite that is known as the Malabar Rite.[4][5] However, a decline in communications between the Patriarchate of Antioch (which is the oldest and which claims Patrenal succession) and India led the Saint Thomas Christians to attempt to establish relations with other churches. As early as 1491, the Archdeacon of Malabar sent envoys to the Syriac Orthodox Patriarch of Antioch as part of an effort to receive a bishop for his bishopless province.[6] In the end nothing came of the request, and the Patriarch of Antioch eventually sent a new bishop.[6]

In 1653, a group of Saint Thomas Christians disaffected by Portuguese colonial rule and the drowning of delegate from the Patriarchate of Antioch (Ahatallah) joined Archdeacon Thomas and Anjilimoottil Ittythomman Kathanar (a priest from the Knanaya Christians), who gave courage to the Archdeacon, in vowing not to submit to Portuguese authority. This avowal, known as the Coonan Cross Oath, led to the formation of an independent Malankara Church with Thomas as its head. To affirm his consecration as bishop, Thomas sent requests to several churches including the Syriac Orthodox Church, the only church responded was the mother church. Syriac Orthodox Patriarch Ignatius Simon I responded by sending Gregorios Abdal Jaleel to India in 1665, and the relationship between the Syriac Orthodox and Malankara Church got re-established (in accordance to one faction of Indian Christians, who claims the establishment and succession of the throne of Saint. Thomas in India, from A.D 52 itself, this is seen as the birth of a new relation; they claim to be nourished by the Nestorian faith, but unfortunately now they follow the theology and Christology and liturgy of Syrian Orthodox Church).[3] 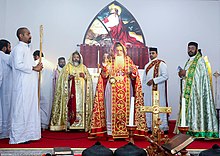 A West Syriac Rite liturgy of the Orthodox Syrian Church

Formal steps towards adoption of the West Syriac Rite came in 1772, when bishops visiting from Antioch consecrated Mar Thoma VI as Mar Dionysius I and established a systematic church hierarchy.[7] Amid visits by a church prelate in 1846 and the Patriarch himself in 1875, the church fully adopted West Syriac practice.[7] Following the splits within the Malankara Church in the 19th century and its final breakup in the 20th century, the churches that developed from it have retained the Malankara Rite. Today the rite is essentially West Syriac in character with some local variations, which sometimes retain elements now archaic in the wider West Syriac tradition.[8] For example, the Malankara Rite includes the observance of the Liturgy of the Presanctified Gifts on weekdays during Great Lent and on the Friday of Passion Week.[8] Since the 20th century, Syriac has largely been replaced as the liturgical language by Malayalam.[8]

The East Syriac Prelate, Mar Yuhanon signed on behalf of the Churches of Persia and India at the first organized gathering of Christianity, the Synod of Nicea was held in 325 AD. The East Syriac Canonist Ibn Tayyib says ‘In the time of Catholicose Mar Ishaq (309-410) the Metropolitanates of Fars and Meru and in the time of Mar Ishu Yab-I/ II/ III (582-660) Halwan, Harat, Samarkhand, India and, China were created’. Mar Ishu Yab warned in his two letters to Mar Shimyun, Metropolitan of Fars (Riwardisher), located in southern Persia that his independent stand will not hamper the ecclesiastical needs of the people of India. Ancient East Syriac (Persian) crosses found out many places with writings in Pahlavi language engraved on it, as seen at Kadamattom Orthodox church, Kottayam Canaanite church, Mylapore church are also pronounce our close relationship with Eastern Church.

Malankara Nazranies also had evolved a script (Karshoni) to write Malayalam after making certain changes in East Syriac script, even though ‘Vattezhuthe’, an early form of Malayalam was in vogue. The present-day Malayalam script was formulated and used by Indo-Aryan settlers on the lines of Devnagari for the translation of their Epics to Malayalam after 12th century. Aarthat Padiyola in copper plate (preserved at University Manuscript Library, Trivandrum), declaring the sovereignty of Malankara Church in 1806 was written in old Malayalam script. An early script, ‘Kharoshti’ (used in Ashoka edicts) that prevailed in northwestern India was also developed from eastern Syriac, which helped to decipher identical edicts written in India's original but defunct Prakrit languages. Even many documents related to 17th and 18th centuries also reveals the attachment of Nazranis to Eastern Syria. A memorandum by Malankara Nazranis to Roman Pope against compulsive westernization during the 17th century states that, "All our prayers are written in the Chaldean Syriac of our Apostle father St. Thomas." A Jesuit priest Nunes Barutha of that period, states that: "Marthoma Christians don't not believe in any other teaching other than written in Eastern Syriac." In 1682, Bartholomew, a West Syrian Malpan from Aleppo was appointed in Verapoly seminary by Carmelites. But Malankara Nazranis strongly opposed the appointment to teach their students by a West Syrian teacher. Canon of Udayamperoor synod (page 79) specifically asked to discontinue the use of Eastern Syriac in liturgy and prayers for native Malayalam. Eastern Aramaic (Syriac) was widely used in Malankara up to the 17th century, and all borrowed words and names from Syriac to Malayalam are phonetically in Eastern Syriac. Later, Malankara Nazranis were almost adapted to Western Syriac and liturgy due to ecclesiastical support and long stay of many Antiochean prelates in the second half of 17th and 18th centuries.

At the outset of Latinisation, Nazranis were reluctant to accept Latin bishops. When Vasco-da-Gama arrived in Cochin in 1502, Metropolitan Mar Yahb Alla assisted by Mar Denha, Mar Yacob and Mar Yuhanon sent by Babylonian Patriarch (See of East Syriac Catholicosate shifted from Selucia to Baghdad began to known as Patriarch) ministered from Ankamaly along with Arkidhyaquana. Cardinal Tisserent in his book ‘Eastern Christianity’ states that even after the arrival of Portuguese, Babylonian Primates, continued to send prelates and they ministered in Malanakara viz. Mar Yacob (1503–49), Mar Joseph and Mar Elias (1556–69), Mar Abraham (1568–97) and thereafter Mar Simeon. Most of them were detained by Portuguese under Goan Inquisition and sent to Bassein (Vasai), Lisbon or Rome for orientation in Latin language, tradition and liturgy. In 1601, Menezes consecrated Fr. Francis Roz as bishop of Ankamaly, which marked the beginning of Roman Catholic hierarchy in Malankara. In 1652, Mar Ahathalla, a prelate from East Syria reached Mylapore (most emotive place in India for every East Syriac in early times) and the news of his detention and torture by Portuguese, caused the great uprising of 1653 known as ‘Coonan (bend) Cross Oath’ in which Malankara Nazranes proclaimed that they or their descendants will not make any relation with Rome and elevated Thomas Arkidhyaquana as Metran (bishop) by laying hands on him by 12 Priests.

Meantime, the Jesuit missionaries Latinised and formed Chaldean Catholic Church and restricted their old tradition to send bishops to Malankara. In light of such a circumstance, to get Apostolic Hand to the newly elevated bishop, the orthodox Churches like Antioch and Alexandria were contacted through the Dutch East India Co. due to their vast mercantile connections in cities and ports. Antiochean Church was the first to respond, sending their Jerusalem Bishop, Mor Gregorios, via a Dutch ship, reaching Malankara in 1665. The Dutch who defeated Portughese in 1663 for trade monopoly and the Malankara Church wanted to escape from the clutches of the Portuguese and caused to the arrival of many more contingent of Antiochean prelates, including Maphriyonos of Mosul, Eldho Mar Baselios (died on the 8th day of his arrival and considered as a saint, whose mortal remain is interned at Kothamangalam) and then Mar Sakralla with a team of Metropolitans and priests. When Malankara Syrians began to accept Antiochean prelates, Roman faction got an opportunity to call Malankara people as ‘Puthenkootukar’ (new tradition) and call themselves as ‘Pazhyakootukar’ (old traditionalists) to cover up their 54 years of new European relation. In fact, Latin rites introduced in Malankara by Menezes were much more strange and unfamiliar than West Syrian rites for Malabar Christians who were traditionally accustomed with Syrianism. Moreover, they found the west Syrian liturgy and rites to be much attractive due to their perceived "pure Syrian tradition."

Latin Catholicism failed to attract Malankara Nazranis, hence Portuguese had to resort to appeasement as well as to pressure tactics to bring Syrians into their fold. In the Coonan Cross Oath, almost the total strength of Syrians supported Arkidhyaquana, but within few decades, the majority of churches were annexed to Romanism. Kerala's long waterways helped the Portuguese soldiers to directly intervene in coastal churches, while geographically interior churches spared due to lack of roads at that time. They asked Kochi, Vadakkumkoor, Thekkumkoor and Ambalapuzha kings to put diktats to their Syrian subjects to join Catholicism.