Maidan Nezalezhnosti (Ukrainian: Майдан Незалежності [mɐjˈdɑn nezɐˈlɛʒnosʲtʲi], literally "Independence Square") is the central square[1] of Kyiv, the capital city of Ukraine. One of the city's main squares, it is located on Khreshchatyk Street in the Shevchenko Raion. The square has been known under many different names, but often it is called simply Maidan ("square").

In the 19th century, the square contained buildings of the city council and noble assembly.

Since the start of Ukraine's independence movement in 1990, the square has been the traditional place for political rallies, including four large-scale radical protest campaigns: the 1990 student "Revolution on Granite", the 2001 "Ukraine without Kuchma", the 2004 Orange Revolution, and the 2013–14 Euromaidan.[2] Maidan is also a regular site for non-political displays and events, however since 2014 most of them were moved to Sofiyivska Square or elsewhere, because making entertainment on a place where people were killed during Euromaidan was considered inappropriate. Most notably, Christmas Fairs and New Year celebrations were moved to Sofiyivska Square.[3]

The square received its current name in 1991, in the aftermath of the Declaration of Independence of Ukraine and the collapse of the Soviet Union. Maidan is a Ukrainian word for "square, open space", with widely used equivalents in the Middle East and South Asia to refer to an open space in or near a town, used as a parade ground or for events such as public meetings. It has similar forms in Urdu میدان (maidān), and its source, Persian میدان (meydân, "town-square or central place of gathering"), from Arabic مَيْدَان (maydān), itself an Iranian borrowing ultimately from Proto-Indo-European *médʰyos. Compare Avestan maiδya, Sanskrit मध्य (madhya) and Latin medius. The word also was borrowed into neighboring Turkic languages, as in the Crimean Tatar and Turkish meydan, which are the likely sources of the borrowing into Ukrainian.

Timeline of the square's names:

Independence Square is one of three squares located along Khreshchatyk, close to the northeastern end of the street. It is situated close to European Square, which is the terminal end of Khreshchatyk. Besides Khreshchatyk, which splits the square in half, several other streets lead to the square. These include Architect Horodecki Street, Institute Street, Michael Street, Kosciol Street, Minor Zhytomyr Street, Sophia Street, Taras Shevchenko Lane, and Boris Hrinchenko Street.[citation needed]

The square itself is a multi-level location. At ground level is the intersection of Khreshchatyk, which splits Institute Street (vulytsia Instytutska), and Michael Street (vulytsia Mykhailivska). Underneath the square, the Obolonsko–Teremkivska line of the Kiev Metro stretches across with its station Maidan Nezalezhnosti located underground.[citation needed] Also the "Hlobus" mall is situated underneath the square.

Until the 10th century, the future square's site, as well as the rest of Khreshchatyk, was called Perevisyshch.[citation needed] It was located just to the south of the Kiev City, beyond which were located territories of the Cave Monastery (Kiev-Pechersky) along the Dnipro River.

At the lower end of Sofiivska vulytsia (Sofia Street), which led to the High City, stood one of the three main gates of Old Kyiv (Yaroslav's City), the Lyadski Gates; the other two were the Golden Gates and Zhydivski Gates. Those gates are also mentioned in 1151, and around them lived the Polish population of the city, Lacka Sloboda. The Lyadksi Gates were destroyed during the storm of city by the Mongol army of Batu Khan in 1240.

Sometime during the 18th century, the new Pecherski Gates were erected; they stood until 1833. Until the early 19th century, the area was a low-lying vacant ground known as Goat Swamp (Kozyne Boloto).

In the 1830s, the first wooden dwellings were built on the site, and in the 1850s stone buildings appeared. The most famous Ukrainian writer, Taras Shevchenko lived in that area in 1859, in a building between Mala Zhytomyrska (Little Zhytomyr) and Mykhailivska vulytsia (Michael's Street).

Development rapidly intensified after the mid-19th century, when the territory gradually became the commercial center of Kiev, which underwent an immense boom during the Russian Industrial Revolution, becoming the third most important city in the Russian Empire. Until 1871, it was called the Khreshchatitskaya Ploshchad (Khreshchatyk Square); it was a location for the local market and folk entertainment. In 1876, the Kiev City Duma building was built here, and the area became to be known as the Dumskaya Ploshchad (Duma Square). A line from the Kiev tram, the first electric tram built in the Russian Empire (opened 1892) reached the square in 1894.

In 1913, in front of the City Duma, a monument of Pyotr Stolypin (who was assassinated in Kiev in 1911) was constructed, and it stood there until March 1917 at the dawn of the Revolutionary war within the Empire. 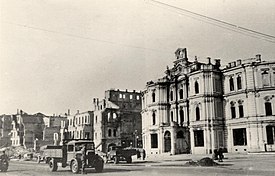 Much of the square was destroyed in the Second World War.[citation needed]

In 1919, the square was renamed Soviet Square. From 1935, it was called Kalinin Square, after Mikhail Kalinin, the first chairman of the Supreme Soviet of the USSR.

During the first couple of years after the war, the square was completely rebuilt from scratch. It was architecturally integrated with the newly constructed Khreshchatyk in the typical (for the time) neo-classical Stalinist architecture. The newly constructed Kiev Central Post Office and Trade-Union House with its high-rise clock located in the square, is very well known and frequently appears in pictures of the center of the city.

In 1976-77, as a part of metro construction, much of the square was again rebuilt, and it was renamed October Revolution Square (Ploshcha Zhovtnevoyi revolyutsii). During the reconstruction, the massive cubist monument to commemorate the 60th anniversary of the October Revolution was put up as was the complex ensemble of fountains.

During the Soviet period, the square was used for demonstrations and parades in honor of May 1 (until 1969), Victory Day and the October Revolution. 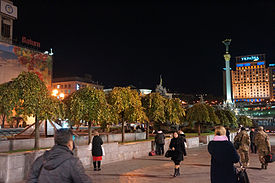 Alley of trees on Maidan Nezalezhnosti

After Ukraine's independence in 1991, the square was given its current name. The competing proposal of Liberty Square (Ploshcha Svobody) was raised at the time as well as in the years to follow, but the current name commemorating the Ukrainian independence is now firmly associated with the square (see the section below).

In 2001, as the square was the major center of the "Ukraine without Kuchma" mass protest campaign, the new extensive construction of the area was abruptly ordered by the Kiev mayor of the time, Oleksandr Omelchenko. The square was fenced off for construction and became inaccessible for the protesters and many observers claimed that the main goal of the project ordered by the city mayor was to disrupt the protests,[6][7][8][9] especially since similar tactics were commonly used by local authorities throughout Ukraine.

Following the construction, the old familiar look of the square, with its many fountains, was significantly altered and the public reaction to the new look of the square was mixed at first.[10] However, by now the square's monument to Kyi, Schek and Khoryv, the legendary founders of Kiev, the folklore hero Cossack Mamay, the city's historic protector Archangel Michael as well as a more modern invention, the protecting goddess Berehynia, and the many glass domes are easily recognisable as parts of the modern city centre.

A mostly underground shopping mall called Hlobus was built under the square to replace the old and shabby giant underpass formerly dubbed by Kievans as "Truba" (the Tube).

Trade-Unions House was severely damaged during the fire in February 2014, so later it went through a reconstruction.

Future developments of the square include the demolition of the old "Ukrayina" hotel (formerly hotel "Moskva"), and building a new 68-floor building instead.

As the central Kyiv square, following the end of Soviet era the Maidan has been the centre of public political activity. In the autumn of 1990, students' protests and hunger strikes also known as the Revolution on Granite at the Maidan resulted in the resignation of the Chairman of the Cabinet of Ministers of the Ukrainian SSR Vitaliy Masol.[11][12]

In the 2000s, the biggest political protests in Ukraine, such as the Ukraine without Kuchma campaign and the Orange Revolution took place in this square. During the Orange Revolution in late 2004, Maidan Nezalezhnosti received global media coverage, as hundreds of thousands of protesters gathered in the square and nearby streets, and pitched tents for several weeks, enduring the cold and snow. One of the eminent activists during that time became Paraska Korolyuk. The protests against electoral fraud resulted in an additional round of presidential elections being ordered by the Supreme Court of Ukraine, which were won by the opposition candidate, Viktor Yushchenko.

Following his election as the President of Ukraine, and after taking the official oath in the parliament, Yushchenko took a public oath at Maidan Nezalezhnosti in front of his numerous supporters.

After the Orange Revolution, Maidan Nezalezhnosti continues to attract political protesters, but no protest related event has ever approached the scale of the Orange protests.[13][14] Mass rallies for political candidates, however, have attracted large numbers, with the 2009 "Batkivshchyna" party congress (during which Yulia Tymoshenko was nominated as a candidate for president) being a notable example that brought nearly 200,000 people to the square.

A color guard marching during the 2010 Kiev Victory Day Parade while carrying the banners of Red Army units based in the Ukrainian SSR.

The square was the site of Euromaidan protests beginning in November 2013, progressing to violent clashes, fires, and ending in the February 2014 Ukrainian revolution.[15] The square was covered in protesters all day and night since 1 December 2013.[16][17][18] On 27 January 2014, Ukrainian police reported a 55-year-old man from Western Ukraine found dead hanging from the framework of a huge artificial 'New Year tree' in central Kiev. The body was found hanging inside the cone-shaped tubular steel construction on Kiev's Independence Square. The tree, which had become a symbol of anti-government resistance, was at that time decorated with a poster of jailed opposition leader Yulia Tymoshenko and scrawled with graffiti opposing President Viktor Yanukovich.[16][17][18] The 2014 Ukrainian revolution of the following month led to more than 100 people perishing.[19]