The Macroplaza or La Gran Plaza is a town square or plaza located in the heart of the city of Monterrey, Mexico.

The Macroplaza is the fifth-largest plaza in the world and the largest Plaza in Mexico. It has an extension of 400,000 square metres consisting of various monuments, smaller plazas and gardens.

The Macroplaza was built in the early 1980s during the governorship of Alfonso Martínez Domínguez. The construction of the Macroplaza required the demolition of several old buildings and houses including a famous movie theater.

One of the most iconic monuments of the city is the Faro del Comercio (Lighthouse of Commerce), a 70-meter-tall modern lighthouse located in the same plaza, equipped with a green laser, that shot its light around the city at nights. 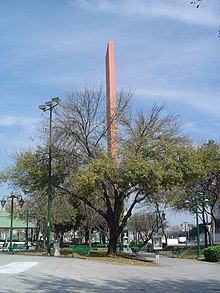 Fuente de Neptuno in front and the Cerro de la Silla in the background.

The Macroplaza is very famous and its features are the following monuments, buildings and pedestrian zones:

Other attractions within walking distance of the Macroplaza include the Morelos pedestrian street to the west, the Plaza de los 400 años, the Santa Lucia Riverwalk to the east as well as the Barrio Antiguo.

The Macroplaza is accessible via Monterrey Metro, with the Zaragoza station located in the centre of the Macroplaza, near the Fuente de Neptuno.