Machias Seal Island is an island in disputed water between the Gulf of Maine and the Bay of Fundy, about 16 km (10 mi) southeast from Cutler, Maine, United States and 19 km (12 mi) southwest of Southwest Head, New Brunswick, Canada on Grand Manan Island. It is a neighbour to North Rock. Sovereignty of the island is disputed. The Canadian Coast Guard continues to staff a lighthouse on the island; the first lighthouse was constructed there in 1832.

The relationship of Machias Seal Island to the Grand Manan archipelago is a source of some dispute among geologists.[citation needed] The island is considered to be a possible continuation of the series of exposed shoals, rocks, and islets strewn south and west of Grand Manan Island. The deeper Grand Manan Channel lies to the north and west of the island, separating it from the coast of Washington County, Maine.

Machias Seal Island is a barren island and devoid of trees. Because of its location at the boundary between the Gulf of Maine and the Bay of Fundy, Machias Seal Island is fog-bound for many days of the year. It is also a sanctuary for seabirds such as Atlantic puffins, razorbills, common murres, common and Arctic terns, Leach's storm-petrels, and common eiders.

Likely used by the Passamaquoddy Nation in the pre-European era, Machias Seal Island was never actively nor successfully settled during the years when the French and the British were exploring this part of North America. The island was largely ignored by both Great Britain and the United States during the American Revolutionary War. The Treaty of Paris ended the conflict surrounding the American Revolutionary War. Article 2 attempted to establish the boundaries between the United States and British North America and part of this text stated the following:

And that all disputes which might arise in future on the subject of the boundaries of the said United States may be prevented, it is hereby agreed and declared, that the following are and shall be their boundaries, from the northwest angle of Nova Scotia, that angle which is formed by a line drawn due north from the source of St. Croix River to the highlands ... ... by a line to be drawn along the middle of the river Saint Croix, from its mouth in the Bay of Fundy to its source, and from its source directly north to the aforesaid highlands which divide the rivers that fall into the Atlantic Ocean from those which fall into the river Saint Lawrence; comprehending all islands within twenty leagues of any part of the shores of the United States, and lying between lines to be drawn due east from the points where the aforesaid boundaries between Nova Scotia on the one part and East Florida on the other shall, respectively, touch the Bay of Fundy and the Atlantic Ocean, excepting such islands as now are or heretofore have been within the limits of the said province of Nova Scotia.

The "northwest angle" of Nova Scotia refers to what is today New Brunswick, and the Canada–US border still follows today the St. Croix River and a line due north from its source. Once the St. Croix River was unambiguously identified following a commission provided by Jay's Treaty of 1794, it became clear that Machias Seal Island, as well as Grand Manan Island, was within 20 leagues (60 nmi (110 km)) of the shores of the United States and south of the line drawn due east from the mouth of the St. Croix River, but it remained unclear whether they were within the defined limits of Nova Scotia. These limits are written in the original text of the land grant dated 1621 to Sir William Alexander (founder of Nova Scotia) in which all "... islands, or seas lying near to, or within six leagues of any part ... of the said coasts" are deemed part of Nova Scotia. Machias Seal Island lies within 3.5 leagues from Grand Manan Island and 3 leagues from the coast of Maine, although Britain would later cease its claims on other islands in eastern Maine, such as Moose Island.

These ambiguities resulted in both countries claiming several islands in Passamaquoddy Bay, Grand Manan Island, and nearby islands. During the War of 1812, Great Britain occupied coastal Maine extending from the border with New Brunswick (created from Nova Scotia in 1784) west to the Penobscot River valley. During this time, tolls were charged upon residents at various occupied harbours in the area. Great Britain withdrew their forces upon signing the Treaty of Ghent in 1814, with the stipulation being that the boundary should be better delineated in the area of the Grand Manan Channel. In 1817, the decision of a joint commission declared that Moose, Dudley, and Frederick Islands belong to the United States, while Grand Manan and all other islands of the Passamaquoddy Bay belong to Canada.

Machias Seal Island, not an island of the Passamaquoddy Bay but near Grand Manan, was never directly mentioned. Britain maintained possession of Machias Seal Island, under pressure from shipping interests at the burgeoning port of Saint John. New Brunswick set up a lighthouse in 1832. There is no indication of either nation having a presence on the island prior to 1832. Later boundary treaties and negotiations extended the seaward boundary in the Grand Manan Channel in 1908–1910 to its present terminus, roughly equidistant between Grand Manan Island and the coast of Maine, and several dozen kilometres (miles) northeast of Machias Seal Island.

The United Kingdom, and later Canada, have maintained an ongoing interest in the island, largely through the continuous occupation of the lighthouse. Until the 1970s–1980s, lighthouse keepers from the Canadian Coast Guard would live on the island with their families, receiving supplies by sea from Grand Manan or Saint John. Since 1944, the island has been protected under its designation as the Machias Seal Island Migratory Bird Sanctuary (a wildlife and seabird sanctuary), managed by the Canadian Wildlife Service. No private citizen in Canada has made an ownership claim to Machias Seal Island, and Canada considers the property to be wholly owned by the federal government. The island has long been included in federal and provincial electoral districts, and policing has been enforced on the island by Royal Canadian Mounted Police and on waters surrounding the island by the Department of Fisheries and Oceans. In the 20th century, some Canadian residents placed mining claims on the island as an exercise of sovereignty, despite the fact that it is considered a protected area.

The United States has never recognized the construction and continuous occupation of a lighthouse since 1832 by the United Kingdom, and now Canada, to determine the island's ownership, citing several cases worldwide (e.g., a case concerning the Red Sea). However, the United States has never maintained an ongoing presence on the island as Canada has, and until recent decades, many branches of the Federal and State of Maine governments were inconsistent in their communications: they sometimes have referred to Machias Seal Island as being owned by Canada.[citation needed]

In 1918, with Canadian agreement, a small detachment of U.S. Marines was placed on the island following the U.S. entry into the First World War, as a means to assist in protecting the territory and its key lighthouse guarding the entrance to the Bay of Fundy from German U-boat attack.[5] These forces were withdrawn after several months, and no U.S. presence has been re-established since. In the past, private citizens in Maine have staked their own claims of the island, and currently an American tour boat operator from Cutler brings tourists to view seabirds during the summer nesting season, although the number of visitors is limited during sensitive periods for the birds.

Sovereignty of Machias Seal Island (and North Rock) would likely not still be in question today if it were not for the decision by Canada and the United States to avoid settling this issue in their 1979 joint application to the International Court of Justice (ICJ) at The Hague in the Netherlands to have the maritime boundary delineated in the Gulf of Maine for fishing and mineral exploration purposes on Georges Bank.[6]

Both nations avoided having ICJ rule on the sovereignty of Machias Seal Island and North Rock by agreeing to have a common starting point for the offshore boundary southwest of the island at 44°11′12″N 67°16′46″W﻿ / ﻿44.18667°N 67.27944°W﻿ / 44.18667; -67.27944. The October 12, 1984, ICJ ruling, Delimitation of the Maritime Boundary in the Gulf of Maine Area (Canada/United States of America), has since highlighted a gap in the maritime boundary for several dozen kilometres between the current end of the Canada–US border and the 1984 Gulf of Maine boundary starting point. Machias Seal Island and North Rock lie in the middle of this "grey zone"—a term coined by fishermen from both countries, referring to unclear jurisdictional boundaries in the area. 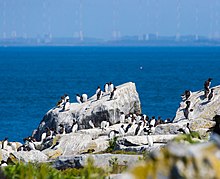 Seabirds on the rocky island

Since the 1984 ICJ ruling on the Gulf of Maine decided the fate of offshore boundaries,[7] Machias Seal Island and neighboring North Rock, an exposed rock outcropping about 4 kilometres (2.5 mi) north-northeast at 44°32′15″N 67°05′10″W﻿ / ﻿44.53750°N 67.08611°W﻿ / 44.53750; -67.08611, as well as the surrounding waters, have become a political football for local politicians in fishing communities of coastal Charlotte County, New Brunswick and Washington County, Maine. There are little to no mineral or petroleum resources in the "grey zone"; however, there is a valuable lobster fishery; fishermen from both countries are exploiting the lack of rules in the "grey zone" by overfishing various species.[5][8]

Using the residence on the island, two lightkeepers are flown by helicopter from the coast guard base in Saint John every four weeks to replace the two existing keepers.[11] These Coast Guard employees also assist the Canadian Wildlife Service in maintaining the Migratory Bird Sanctuary, as well as helping any wildlife researchers who may stay on the island for a period of time.

In June 2018, US Border Patrol vessels stopped at least ten Canadian fishing boats from New Brunswick, reportedly asking about illegal immigrants. Global Affairs Canada reportedly stated that it is investigating "these incidents that occurred in Canadian waters". The Grand Manan Fishermen's Association suggested "the actions of the US agents may have been routine".[12]