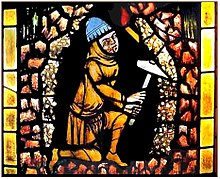 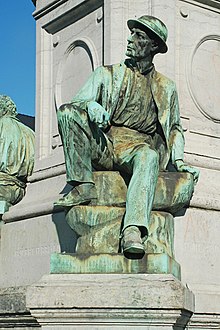 Statue of a miner (Monument to John Cockerill in Brussels).

A miner is a person who extracts ore, coal, or other mineral from the earth through mining. There are two senses in which the term is used. In its narrowest sense, a miner is someone who works at the rock face; cutting, blasting, or otherwise working and removing the rock.[1][2] In a broader sense, a "miner" is anyone working within a mine, not just a worker at the rock face.[1]

Mining is one of the most dangerous trades in the world.[3] In some countries, miners lack social guarantees and in case of injury may be left to cope without assistance.

In regions with a long mining tradition, many communities have developed cultural traditions and aspects specific to the various regions, in the forms of particular equipment, symbolism, music, and the like.

Different functions of the individual miner. Many of the roles are specific to a type of mining, such as coal mining. Roles considered to be "miners" in the narrower sense have included:

Other roles within mines that did not involve breaking rock (and thus fit the broader definition) have included:

In addition to miners working underground, a mine employs other workers in duties at the surface. In addition to the office staff of various sorts, these may include:

The basics of mining engineering includes finding, extracting, and preparing minerals, metals and coal. These mined products are used for electric power generation and manufacturing industries. Mining engineers also supervise the construction of underground mine operations and create ways to transport the extracted minerals to processing plants.