listen); Westrobothnian: Lul, Leul, or Leol [²lʉːɽ], locally [²lewɽ]; Lule Sami: Luleju) is a city on the coast of northern Sweden, and the capital of Norrbotten County, the northernmost county in Sweden. Luleå has 48,728 inhabitants in its urban core (2018) and is the seat of Luleå Municipality (with a total population of 77,832).

Luleå has the seventh biggest harbor in Sweden for shipping goods.[4] It has a large steel industry and is a center for extensive research. Luleå University of Technology is one of Sweden's three technology universities (the other two are KTH and Chalmers) and the northernmost university in Sweden. The university has approximately 15,000 students.

An engraving of Luleå New Town from Suecia Antiqua et Hodierna. The most prominent buildings are the church and the town hall.

The town's Royal charter was granted in 1621 by King Gustavus Adolphus of Sweden. The original town was situated where Gammelstad (Old Town) is situated today. The town had to be moved in 1649 to the current site, due to the post-glacial rebound that had made the bay too shallow for ships to enter.

The Gammelstad Church Town is a UNESCO World Heritage Site.

In 1805, Luleå only had 947 inhabitants, but in 1865 Luleå succeeded Piteå as the county town in Norrbotten county and now had around 1400 residents. In the 1860s the industries also started taking root in the city.

The town has been plagued by fires in 1653, 1657 and in 1887, and the fire in 1887 was a devastating fire that destroyed most of the town, sparing only a few buildings. The Neo-Gothic Cathedral (originally the Oscar Fredrik church), dedicated in 1893, standing at 67 meters (220 ft), is the tallest building in town. 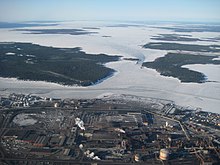 Luleå's commerce and industry are a mix of industry, research, education, trade, and services.

Major employers in the city are the SSAB steelworks and Luleå University of Technology. A Swedish Air Force wing, F 21 (or Norrbotten Air Force Wing), is stationed near Luleå at the neighbouring Luleå Airport. Other major employers include Ferruform (a subsidiary of Scania AB) and Gestamp HardTech (acquired from SSAB 2005-01-01).

The information technology industry in Luleå has about 2000 employees (2008).

Luleå is the home of several major innovations and technological milestones.[5]

The new European computer center in Luleå is Facebook's first investment outside of the US. Some of the reasons that Facebook choose Luleå were because of natural cooling due to the climate, cheap electricity, reliable electrical networks, and clean energy. The computer center is the largest in Europe, with 84,000 m2 (900,000 sq ft) which is comparable to 11 football fields.

The computer center will process large amounts of data through thousands of computers working as one. The establishment of Facebook in Luleå has also led to other companies realizing the potential of establishing in Luleå. The positive effect has also been noticeable at the university where the applications rate has risen with 18 percent — Luleå Science Park has also had an increase with 25 percent of new established companies.

Due to the Gulf Stream, Luleå has a warmer climate than other cities on the same latitude and even some that are further south in Canada, Alaska, Northeast China and Siberia. During the summer in June and July the temperature in Luleå can some days rise to around +30 degrees Celsius. Summers are very bright, with marginal twillight being the only exception during the summer solstice.

Luleå Airport (IATA: LLA, ICAO: ESPA), located 7 km (5 mi) south of the city centre, is the fifth largest airport in Sweden, with about 1.2 million yearly passengers.[12] It is the largest airport in Norrland. The domestic route to Stockholm Arlanda Airport is the third busiest domestic route in Sweden with over 1 million passengers per year. Luleå Lokaltrafik operates connections to and from Luleå Airport via Line 4 and 104.

In total, there are seven scheduled destinations and about 15 additional charter destinations. The Stockholm Arlanda Airport route is operated by Scandinavian Airlines and Norwegian Air Shuttle and serves the vast majority of passengers at the airport with about 16 daily connections each way. Scandinavian Airlines also operates a direct connection to Göteborg Landvetter Airport.

Nextjet operates connections to and from Göteborg Landvetter Airport via Höga Kusten Airport, and their Tromsø Airport – Oulu Airport route lands at Luleå airport on some departures. Jonair offers connections to Pajala Airport.

The world's first indoor mall[13] was opened in Luleå in 1955 (architect: Ralph Erskine) and was named Shopping. There are two other malls in Luleå: Strand and Smedjan. The main shopping streets in Luleå are Storgatan and Kungsgatan. A few kilometres outside Luleå there is a shopping centre called Storheden. 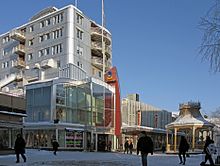 Luleå has a variety of cultural institutions, among them Norrbottensteatern; Norrbotten Museum; and Norrbotten Big Band [de], led by Tim Hagans. In January 2007 the Cultural House (Kulturens Hus) was opened. A library, concerts, and art exhibitions are all hosted here.

The Theatre of Norrbotten

One of the largest winter festivals in Luleå is the indoor Minus 30-festivalen, held at Kulturens hus (the House of Culture) annually on a Saturday in mid-March.

Luleå Hamnfestival (Luleå harbor festival) is a big summer event in the center of Luleå, mostly centered around the north harbor. The festival has been a recurring event each summer since 2013. Held in July, it is a free event not targeting a specific group. The festival is the new version of Luleåkalaset which was held each summer from 2002 to 2012, which itself replaced sjöslaget, the summer festival from 1988 to 2002.

Musikens makt (The power of music) is a smaller, free music festival that is held each summer in August at Gültzauudden since 2010.

Ice music is a new art form where professional musicians play on instruments made out of ice. The concerts are performed in a huge igloo and the instruments pulsate in all the colors of the rainbow.

Luleå has many teams competing in a variety of sports. 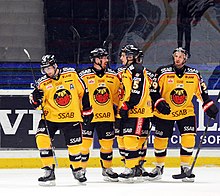 The Swedish Championship in Yukigassen is held in Luleå annually.