Einaudi was born to Lorenzo and Placida Fracchia in Carrù, in the province of Cuneo, Piedmont. In Turin he attended Liceo classico Cavour and completed his university studies; in the same years he became acquainted with socialist ideas and collaborated with the magazine Critica sociale, directed by the socialist leader Filippo Turati. In 1895, after overcoming financial difficulties, he graduated in jurisprudence, and was later appointed as professor in the University of Turin, the Polytechnic University of Turin and the Bocconi University of Milan.

From the early 20th century Einaudi moved increasingly towards a more conservative stance. In 1919 he was named Senator of the Kingdom of Italy. He also worked as a journalist for important Italian newspapers such as La Stampa and Il Corriere della Sera, as well as being financial correspondent for The Economist.[3] An anti-fascist, he stopped working for Italian newspapers from 1926, under the Fascist regime, resuming his professional relationship with the Corriere della Sera after the fall of the regime in 1943. After the Armistice (8 September 1943) he fled to Switzerland, returning to Italy in 1944.

Einaudi was Governor of the Bank of Italy from 5 January 1945 until 11 May 1948, and was also a founding member of the Consulta Nazionale which opened the way to the new Parliament of the Italian Republic after World War II. Later he was Minister of Finances, Treasury and Balance, as well as Vice-Premier, in 1947–48. He was also a member of the neo-liberal think tank the Mont Pelerin Society.[4]

President of the Italian Republic

On 11 May 1948 he was elected the second President of the Italian Republic. At the end of the seven-year term of office in 1955 he became Life Senator. Einaudi was a member of numerous cultural, economic and university institutions. He was a supporter of the ideal of European Federalism.

Einaudi personally managed the activities of his farm near Dogliani, producing Nebbiolo wine, for which he boasted to be using the most advanced agricultural developments. In 1950, monarchist satirical magazine Candido published a cartoon in which Einaudi is at the Quirinal Palace, surrounded by a presidential guard of honour (the corazzieri) of giant bottles of Nebbiolo wine, each labeled with the institutional logo. The cartoon was judged a lese-majesty by a court of the time, and Giovannino Guareschi, as the director of the magazine, was held responsible and sentenced. 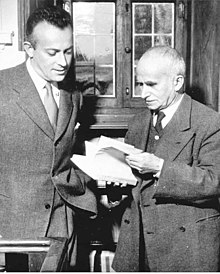 Luigi Einaudi, at right, with his son Giulio, 1951

Both his son Giulio, a prominent Italian publisher, and his grandson, Ludovico, a neo-Classical musician, have subsequently made names for themselves.

Another son, Mario, was a Cornell University professor and active anti-fascist. The Mario Einaudi Center For International Studies is named after him. Additionally, Mario founded the Fondazione Luigi Einaudi in Turin in honor of his father.

Also the research center of the Bank of Italy, the Einaudi Institute for Economics and Finance (EIEF), is named in honor of Luigi Einaudi.