For the 1996 and 1997 seasons, the Spinners played at Stoklosa Alumni Field. Since 1998, they have played at Edward A. LeLacheur Park in Lowell.[2]

Lowell's heritage in organized baseball dates to 1877, when the city hosted a team in the League Alliance. It was a frequent member of the Class B New England League, but had not fielded a team in minor league baseball since 1947, when the nearby Lawrence franchise transferred to Lowell on July 15.

After Smoll brought the Spinners to Lowell in 1996, Drew Weber was the team owner from 1997 until June 2016, when it was purchased by Dave Heller.[2]

On August 21, 2003, the Spinners sponsored a Jack Kerouac bobblehead giveaway.[4] Kerouac was a Lowell native, and played football for Lowell High School.[5] The bobblehead was accepted by Cooperstown in 2005, the first time a literary icon was accepted there.[6] The bobbleheads were so popular that many more were made than originally intended, raised $10,000 for the Jack Kerouac Scholarship Fund.[6] The enshrinement also made media headlines as far away as Los Angeles.[7]

The giveaway was repeated on August 7, 2012, when the film adaptation of On the Road was released.[5] The dolls had a bobble head as well as a "bobble arm."[8] The bobbleheads were also available online for ordering, and as the game was sponsored by the UMass Lowell English Department, their departmental scholarships received the proceeds from the online orders.[9] A third Kerouac bobblehead, featuring Kerouac in his Lowell High football uniform, was given out on July 25, 2013.[10]

In 2005, the Spinners created the "Yankees Elimination Program." They offered to pay for the uniforms to all Little Leagues and youth softball teams in New England so that they would change all teams named "Yankees" into "Spinners". Over the next five years, 150 teams in New England made the switch. The Spinners also invited the youth teams to play at LaLecheur Park, and assisted in other fundraising initiative for those teams. In 2010, the program was limited to 75 teams on a first-come, first-served basis, and it was estimated that over $70,000 had been donated to youth baseball and softball programs through the initiative. Spinners VP and GM Tim Bawmann said,“The Yankees Elimination Promotion was originally built as a fun promotion in response to parents' stories of children losing interest in the game after facing taunts simply for playing in a Yankees uniform.”[11]

In October 2014, the Red Sox agreed to extend their player development contract with the Spinners for two more years through the 2016 season.[12] In November 2015, the contract was extended again through the 2018 season.[13]

In the 2016 season, the Spinners ended with a franchise-best record of 47 wins, and tied their record for home wins (25). Right fielder Tyler Hill won the NYPL batting title, and he and third baseman Bobby Dalbec became the first Spinners players to win Player of the Month awards. The Spinners won the Stedler Division title, but were swept by the Hudson Valley Renegades in the semifinals, 2–0.[14] Pitching prospect Jason Groome made his first start for the team in the playoffs, after being promoted from the Gulf Coast League Red Sox.[15]

In 2019, the Spinners finished first in their division, then defeated the Batavia Muckdogs (2 games to 1) in the semifinals, to advance to the league championship series against the Brooklyn Cyclones. The Spinners were defeated in the finals (2 games to 1), with Brooklyn winning the deciding third game of the series by a 4–3 score.[16]

Following the 2019 season, Major League Baseball (MLB) proposed dramatic changes to Minor League Baseball (MiLB) that would take effect after the current agreement that governs the MLB–MiLB relationship expires at the end of the 2020 season.[17] MLB's proposal included reducing the number of minor league teams from 160 to 120—the Spinners were included on the list of teams that could be eliminated under the proposal.[18]

Spinners games are broadcast on Lowell talk station WCAP. For the 2007 season they were on WLLH, another Lowell AM radio station, which at the time was an ESPN Radio affiliate. The games returned to WCAP the next season.[19][20][21]

Records since the team has played in Lowell (1996–present).

A full list of Spinners players who played in the major leagues, with their debut dates, is maintained on the team website.[29] 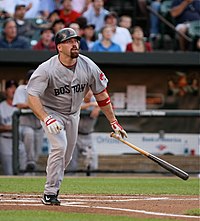 Kevin Youkilis broke into pro baseball with the 2001 Spinners, and batted .317 in 59 games. 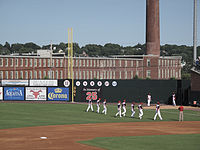 Spinners warming up at LeLacheur Park, 2009