The Low Memorial Library is located on the Columbia University campus in Morningside Heights, Manhattan, New York City. It was built in 1895 by University President Seth Low as the University's central library. Financed with $1 million of Low's own money due to a lack of funds from alumni (a recurring problem throughout the university's history), he named it in memory of his father, Abiel Abbot Low. It has housed the central administrative offices of the university following the completion of the Butler Library in 1934, and is the focal point and most prominent building on the university's Morningside Heights campus.

The steps leading to the library's columned facade are a popular meeting place for Columbia students as well as home to Daniel Chester French's sculpture, Alma Mater, a university symbol. Low Library was officially named a New York City landmark in 1967, with the interior being designated in 1981,[1] then a National Historic Landmark twenty years later.[5][6][7]

Low Library was designed by Charles Follen McKim of the architectural firm of McKim, Mead, and White,[1][3]:3 which was responsible for the design of much of Columbia's Morningside Heights campus. The library was designed in the neo-classical style, incorporating many of the elements of Rome's Pantheon.[3]:3 The building is in the shape of a Greek cross and features windows modeled on those of the Baths of Diocletian. The columns on the library's front facade are in the Ionic order, suited to institutions of arts and letters. An inscription on the building's attic describes the history of the university. It reads:

King's College Founded in the Province of New York 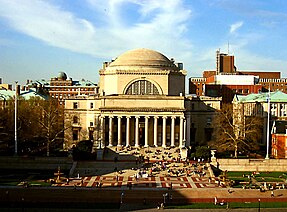 Low Library elevation, from the upper stories of Butler Library.

The interior abounds with classical references. At the entryway are bronze busts of Zeus and Apollo. The foyer contains a white marble bust of Pallas Athena, modeled after the Minerve du Collier at the Louvre and donated by Jonathan Ackerman Coles of the Columbia College Class of 1864, an alumnus of Columbia's Philolexian Society. She is surrounded by the twelve signs of the zodiac. The 106-foot-tall (32 m) rotunda, formerly the library reading room when the building was used for its original function, is lined with columns of solid green Connemara marble from Ireland, topped with gold capitals. Roman and Greek philosophers Demosthenes, Euripides, Sophocles, and Augustus Caesar stare down from the rotunda's heights as the four points of knowledge, Law, Philosophy, Medicine, and Theology, mark the four points of the Greek Cross. The rest of the interior is finished with Italian and Istrian marble.

A late 19th-century real estate magazine, believing Low to be patterned after a French church by "the architect Rumpf", criticised the design, writing that "there is scarcely any original designing done in this city, except the vagaries of the incompetent. The rest is mostly a copybook reproduction of classical and other detail. Successful architects have too much to do to be pre-eminently artists -- they must be first-rate men of business."[8]

Low was the first building on Columbia's new Morningside campus when it was built in 1895 on the site of crop fields and the Bloomingdale Insane Asylum.[3]:2 Low originally served as the university's main library until 1934 when it was supplanted by the larger Butler Library. After a period during which it still housed the university's archives, the building now consists almost solely of administrative offices. However, the building's facade is still etched with the words "The Library of Columbia University," leading many to mistakenly believe that it retains its earlier role.

During the 1968 Columbia protests, Low was occupied by students objecting to, among other things, the proposed construction of a university-owned gymnasium in Morningside Park, as well as Columbia's involvement with the Vietnam War. Within Low, the students barricaded themselves inside the office of University President Grayson L. Kirk, where they searched for documents. Dramatic scenes ensued, including attempts to catapult food to the protesters and efforts by their adversaries to cordon them off. The access of Columbia media outlets such as WKCR and the Columbia Daily Spectator, allowing them to break stories relating to the events in Low prior to national news organizations, remains a mystery; many believe students had access to secret tunnels. The protesters were only removed after a controversially violent assault on the building by the New York Police Department. 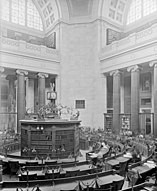 Rotunda, c. 1900–10
The building was later converted to administrative use and the rotunda became a ceremonial space

In 1954 during the University's bicentennial and following the election in 1952 of former Columbia University president General Dwight D. Eisenhower to the US presidency, Low Library was commemorated on a postage stamp. For the University's semiquincentennial in 2004, an image of the library was placed on a pre-stamped postcard.[9]

From April 14–22, 2016, students from Columbia Divest for Climate Justice conducted a peaceful sit-in outside of President Lee Bollinger's office in Low Library to demand divestment from the top 200 publicly traded fossil fuel companies. Seventeen students originally joined the sit-in but students who left were not allowed reentry into the building. Six students remained to the last day. University administration locked down the building and had security guards continually monitoring the students. Over 100 students joined a "sleep-out" on the steps of the library to show solidarity for the sit-in participants who faced potential school sanctions or arrest.[10] Presidential candidate Bernie Sanders voiced support for the students.[11]