Louis St. Laurent Catholic School is a fine arts oriented Junior and Senior High School in the Edmonton Catholic School District, located in south western Edmonton. The school averages a student body of approximately 1,000 or more pupils each year, spanning grades 7–12. As of 2009, the entire school participates in the International Baccalaureate programme.

Louis St. Laurent School is a combination junior/senior high school in the Edmonton Catholic School District, created by combining the former Cartier McGee Junior High School and Louis St. Laurent High School. In 1974, a central hallway was constructed to connect the two schools on the ground floor. The connector was further modified in 1993 to include a large ancillary room, which serves as a meeting room and lunch hall, as well as facilitating other activities that require a large, open space. The school is named for the 12th Prime Minister of Canada, Louis Stephen St. Laurent.

Louis St. Laurent is considered to be a fine-arts based Catholic School, though it is also known for its athletic teams, especially volleyball. Every year near the end of October, the school holds a volleyball tournament called "S.M.A.S.H". Teams from various places in Alberta and British Columbia participate in this three-day event. It allows the junior and senior high students to unite and cheer for their varsity men's and women's volleyball high school teams. To show school pride, the students of Louis St. Laurent can usually be seen wearing green and yellow and/or their halloween costume to support their team. Every student in the school watches the opening ceremony of the tournament and the first game with a LSL team playing against one of the visiting teams, before being dismissed to regular classes.

Over the years, students have created traditions, especially among the grade 12 graduating class. Most noteworthy is the year end water fight between grade twelve students,[1] and a graduation prank.[2] After incidents of breaking into the school and one year where crickets were set loose in the school, the school staff has tried to stop these traditions.

- Formal Day - students in the school dress their best.

- Marathon Dance - a school dance where students dance for a time to earn money for charity. The marathon dance was discontinued for a few years, but was reinstated in 2010.

- Students vs Teachers Volleyball game - the varsity girls' and boys' Volleyball teams play against the teachers during lunch period, and part of the third period after the season is over; students are allowed to watch.

- Dodgeball Tournament - High school students create teams of six to compete in a game of dodgeball during lunch. The winning team is allowed to play against the teachers in the final match. Though it is not officially an event every year, student council has consistently organized this throughout the years. 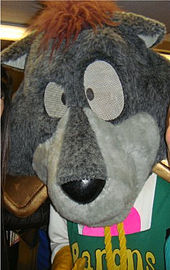 The school has two mascots, one is the Baron, and the other is a non-descript animal called "Louis" because of the name of the school. The event they never miss is the S.M.A.S.H. Tournament where most students are present. Notably, they do not appear in many school games because the audience for the games are small. Each year, auditions are held to determine the mascot but the results are kept secret to everyone except the student council, to ensure his identity is hidden.

The mascot is a grey animal with brownish red hair. It wears a green jersey, with the school team's name on it. The Baron mascot is similar to the logo, a warrior with a green helmet, green uniform, while holding a green and gold shield and a gold sword.