Louis-Joseph Papineau (October 7, 1786 – September 23, 1871), born in Montreal, Quebec, was a politician, lawyer, and the landlord of the seigneurie de la Petite-Nation. He was the leader of the reformist Patriote movement before the Lower Canada Rebellion of 1837–1838. His father was Joseph Papineau, also a politician in Quebec. Papineau was the eldest of eight children[1] and was the grandfather of the journalist Henri Bourassa, founder of the newspaper Le Devoir. The Papineau metro station and l'École Secondaire Louis-Joseph Papineau in Montreal were named after him.[2]

Speaker of the Legislative Assembly

Papineau was elected Speaker of the Legislative Assembly of Lower Canada on January 21, 1815. The same year, he replaced Pierre-Stanislas Bédard as leader of the Parti Canadien. Under his leadership, the party worked for the reform of Lower Canada's political institutions and strongly opposed the abuses of the appointed Legislative Council.

In 1820, he refused a position on the Legislative Council offered by governor Dalhousie. 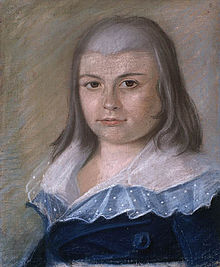 Papineau was described as an energetic child. His arrival at the Seminary of Quebec in 1802 was highly anticipated, and his reputation preceding him. Upon graduation, he began an apprenticeship under his father with the goal of becoming a blacksmith, but this was quickly abandoned when the young Papineau turned to law, joining his cousin Denis-Benjamin Viger.[1] Viger "was for a time the assembly's agent in London and became one of Papineau's prominent supporters and close friends, but after the rebellion, he was to follow Lafontaine."[3]

Papineau's later childhood was mainly spent on the seigniory of la Petite Nation, located on the Ottawa river, which was purchased by his father in 1801 from the Quebec Seminary.[3] During his time spent at the seigniory of La Petite-Nation, Papineau was sent to study at the College of Montreal where he rebelled and was forced to leave college. He was then sent to study at the Seminary of Quebec, where he completed his secondary studies.[3]

In 1808 Papineau was elected member of parliament for Kent (now Chambly, Quebec) before being admitted to the Bar of Lower Canada in 1810. Later, he served as a militia officer in the War of 1812.[4]

In 1822, he was sent to London with John Neilson to present a petition of 60,000 signatures against the Union project. While in the United Kingdom, he was replaced by Joseph-Rémi Vallières as Speaker.

In 1826, he was chosen leader of the Patriotes, a reformed and more radical Parti Canadien. In 1831, he sponsored a law which granted full equivalent political rights to Jews, 27 years before anywhere else in the British Empire. The events that led to Jews receiving full citizenship rights in Lower Canada in advance of other nations or territories in the British Dominion were due to the involvement of one Ezekiel Hart, a Jew who had proved his dedication to the burgeoning Canadian identity by raising money to support troops in Lower Canada to help in defence against United States invasion from the south.

Louis-Joseph was part of the committee that wrote the Ninety-Two Resolutions passed by the Legislative Assembly on February 21, 1834. The resolutions called for an elected Legislative Council and an Executive Council responsible before the house of the people's representatives.

Leader of the Patriotes

After the arrival of the 92 Resolutions in Lower Canada on March 6, 1837, he led the movement of protest and participated in numerous popular assemblies. He led the committee that organized the boycott of essentially all British imports to Lower Canada. On November 15, he created the Conseil des Patriotes with Edmund Bailey O'Callaghan. He and O'Callaghan fled Montreal for Saint-Denis-sur-Richelieu on November 16, after governor Lord Gosford ordered their arrest and that of 25 other Patriot leaders. Papineau and O'Callaghan went to the home of Wolfred Nelson. He crossed the United States border on November 25.

On February 8, 1839, he departed to leave New York City for Paris where he hoped to get France involved. In May, he published the Histoire de l'insurrection du Canada (History of the insurrection in Canada) in the magazine Progrès. Despite meeting with influential politicians such as Lamartine and Lamennais, the France of Louis-Philippe also remained neutral. After his wife left in 1843 "he spent a large part of his leisure in the main archival repositories in Paris, where he copied documents relating to French rule in Canada".[5]

His role in the 1837 rebellions against British rule forced him into exile until 1845, when, three years after he had been granted amnesty, he finally decided to return to what in 1845 was called the Province of Canada but he visited Italy and Switzerland before getting to the Province of Canada.[3] He only returned to Montreal after he had been granted amnesty by the colonial government as well. 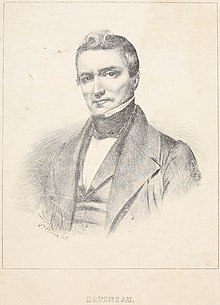 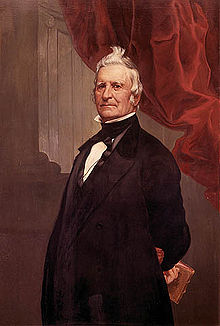 In 1848, he was elected member of the new united Legislative Assembly of the Province of Canada in the riding of Saint-Maurice. In severe disagreement with the emerging French Canadian Liberal Party, he became an independent Member of Parliament. A convinced republican after a long exile in the United States and France, Papineau supported the Montreal Annexation Manifesto that called for Canada to join the United States of America.[6][7]

Louis-Joseph Papineau, along with John Molson Jr., the son of John Molson, and Horatio Gates, served as the first Vice-Presidents of the Montreal Mechanics' Institute. He participated in the creation of the Parti rouge. He was defeated in 1851 but elected in a by-election in 1852. He did not present himself again in the elections of 1854. He retired from public life and reappeared only once to hold a conference at the Institut Canadien de Montréal in December 1867. He died at his manor in Montebello, Quebec near the modern Château Montebello on September 23, 1871.

Papineau's manor house in Montebello, and his house in Montreal, have both been designated as National Historic Sites of Canada.[8][9]

On October 21, 2012, a monument to his memory was unveiled at Saint-Denis-sur-Richelieu by Québec Premier Pauline Marois.