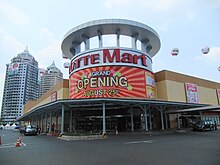 Lotte Mart is a South Korean hypermarket that sells a variety of groceries, clothing, toys, electronics, and other goods, with headquarters in South Korea.[1] Lotte Mart is a division of the Lotte Co., Ltd. which sells food and shopping services in South Korea and Japan.[2] Lotte Mart, part of the Korean conglomerate "Lotte", opened its first branch at Guui-dong, GangByeon, Seoul, Korea on April 1, 1998.[3] In 2006, Lotte Mart opened its first overseas branch. As of August 8, 2011, Lotte Mart had 199 branches (92 branches in Korea, 82 branches in China, 23 branches in Indonesia, and 13 branches in Vietnam).[4] The brands that Lotte created and sell include Herbon, Wiselect, Withone, Basicicon, Tasse Tasse, and Gerard Darel.

In February 2017, it was reported that Lotte Group had agreed to offer one of its golf course to be swapped with Korea military. The golf course was expected to be used as a site for Terminal High Altitude Area Defense (THAAD) to the US military. [7]