Lord mayor is a title of a mayor of what is usually a major city in the United Kingdom or Commonwealth realm, with special recognition bestowed by the sovereign.[1] However, the title or an equivalent is present in other countries, including forms such as "high mayor". Aldermen usually elect the lord mayor from their ranks, who consequently becomes a member of the council/alderman.[2] 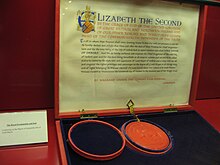 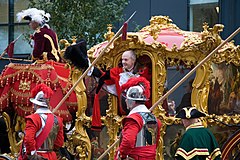 In England, Wales, and Northern Ireland, it is a purely ceremonial post conferred by letters patent. See List of lord mayoralties and lord provostships in the United Kingdom. Most famously it refers to the Lord Mayor of London, who only has jurisdiction over the City of London, as opposed to the modern title of Mayor of London governing Greater London.

Equivalents in other languages

The style of address for the office of the lord mayors of Belfast, Cardiff, the City of London, and York is The Right Honourable. All other lord mayors are The Right Worshipful. This refers only to the post, rather than the person.[1] The title Sir can be used for salutations when a lord mayor is being addressed.[6][7]