Lord Forbes is the senior Lordship of Parliament in the Peerage of Scotland.

The title was created sometime after 1436 for Alexander de Forbes, feudal baron of Forbes. The precise date of the creation is not known, but in a Precept dated July 12, 1442, he is already styled Lord Forbes. Brown's 1834 Peerage of Scotland gives a creation year of 1440. Alexander's descendant, the twelfth Lord, served as Lord Lieutenant of Aberdeenshire and Kincardineshire. His great-grandson, the seventeenth Lord, was a general in the Army and sat in the House of Lords as a Scottish Representative Peer from 1806 to 1843. His son, the eighteenth Lord, fought at the Battle of Waterloo in 1815.[3]

Hon. Patrick Forbes, third son of the second Lord Forbes, was the ancestor of both the Earls of Granard and the Forbes baronets of Craigievar. Also, the Lords Forbes of Pitsligo were descended from Sir William Forbes, brother of Alexander Forbes, 1st Lord Forbes.

The family seat is Forbes Castle, near Alford, Aberdeenshire. 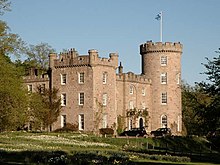 The heir apparent is the present holder's grandson, Geordie Malcolm Andrew Forbes (b. 2010).