Lorado Zadok Taft (April 29, 1860, in Elmwood, Illinois – October 30, 1936, in Chicago) was an American sculptor, writer and educator.[1] His 1903 book, The History of American Sculpture, was the first survey of the subject and stood for decades as the standard reference. He has been credited with helping to advance the status of women as sculptors. 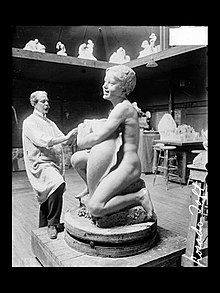 Taft was born in Elmwood, Illinois. His parents were Don Carlos Taft and Mary Lucy Foster.[2] His father was a professor of geology at the Illinois Industrial University (later renamed the University of Illinois at Urbana–Champaign). He lived much of his childhood at 601 E. John Street, Champaign, Illinois, near the center of the UIUC campus. The house, now known as the Taft House was built by his father in 1873. It was purchased by the university in 1949 and moved about one mile southeast.[3] After being homeschooled by his parents, Taft earned his bachelor's degree (1879) and master's degree (1880) at Illinois Industrial University.

After his master's degree, he left for Paris to study sculpture, attending the École nationale supérieure des Beaux-Arts from 1880 to 1883, where he studied with Augustin Dumont, Jean-Marie Bonnassieux, and Gabriel Thomas. His record there was outstanding; he was cited as "top man" in his studio and twice exhibited at the Salon.

Upon returning to the United States in 1886, Taft settled in Chicago. He taught at The School of the Art Institute of Chicago until 1929. In addition to work in clay and plaster, Taft taught his students marble carving, and had them work on group projects. He also lectured at the University of Chicago and the University of Illinois.[4]

In 1892, while the art community of Chicago was preparing for the World's Columbian Exposition of 1893, chief architect Daniel Burnham expressed concern to Taft that the sculptural adornments to the buildings might not be finished on time. Taft asked if he could employ some of his female students as assistants (it was not socially accepted for women to work as sculptors at that time) for the Horticultural Building. Burnham responded, "Hire anyone, even white rabbits, if they'll do the work." From that arose a group of talented women sculptors known as "the White Rabbits", which included Enid Yandell, Carol Brooks MacNeil, Bessie Potter Vonnoh, Janet Scudder, Julia Bracken, and Ellen Rankin Copp.

Later, another former student, Frances Loring, noted that Taft used his students' talents to further his own career, a not-uncommon situation. In general, history has given Taft credit for helping to advance the status of women as sculptors.

As Taft grew older, his eloquence and compelling writing led him, along with Frederick Ruckstull, to the forefront of sculpture's conservative ranks, where he often served as a spokesperson against the modern and abstract trends that developed during his lifetime. Taft's frequent lecture tours for the Chautauqua gave him a broad, popular celebrity status. 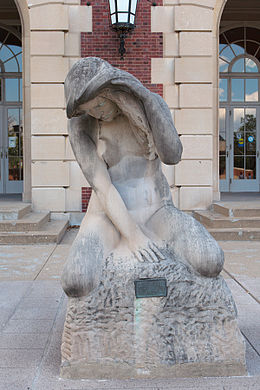 Part of the Fountain of Creation (1933, unfinished), at the Library of the University of Illinois at Urbana-Champaign.

In some settings, Taft is better known for his writings than for his sculpture. In 1903, Taft published The History of American Sculpture, the first survey of the subject. The revised 1925 version was to remain the standard reference on the subject until Wayne Craven published Sculpture in America in 1968. In 1921, Taft published Modern Tendencies in Sculpture, a compilation of his lectures given at the Art Institute of Chicago. At the time, it offered a distinct perspective on the development of European sculpture; today, the book continues to be regarded as an excellent survey of American sculpture in the early years of the 20th century.

In 1898, Taft was a founding member of the Eagle's Nest Art Colony in the small town of Oregon, Illinois. Taft designed the Columbus Fountain at Union Station in Washington, D.C., in collaboration with Daniel Burnham. Taft was a member of the National Academy of Design, the National Institute of Arts and Letters, and the American Academy of Arts and Letters; he headed the National Sculpture Society in the 1920s, exhibiting at both their 1923 and 1929 shows, and he served on the Board of Art Advisors of Illinois. He served on the U.S. Commission of Fine Arts from 1925 to 1929, and was an honorary member of the American Institute of Architects. His papers reside in collections at the Smithsonian Archives of American Art, the University of Illinois, and the Art Institute of Chicago.[5]

He maintained his connections with his alma mater throughout his life. (His association with the University is commemorated by a street named in his honor.) In 1929, he dedicated his sculpture Alma Mater on the University of Illinois campus. Taft envisioned his Alma Mater as a benign and magnificent woman, about 14 ft (4.3 m) high and dressed in classical draperies, rising from a throne and advancing a step forward with outstretched arms in a gesture of generous greeting to her children. Two figures behind her on either side represent the university's motto, Learning and Labor.[6]

Taft was active until the end of his life. The week before he died, he attended the Quincy, Illinois, dedication ceremonies for his sculpture celebrating the Lincoln-Douglas debates.[1] He died in his home studio in Chicago on October 30, 1936.

Taft may be best remembered for his various fountains.[citation needed]

The University of Illinois Archives has a series of photographs of most of Lorado Taft's important works, including many of their construction and preliminary models.[7]

Following more than a dozen years of work, Taft's Fountain of Time was unveiled at the west end of Chicago's Midway Plaisance in 1922. Based on poet Austin Dobson's lines — "Time goes, you say? Ah no, Alas, time stays, we go." The fountain shows a cloaked figure of time observing the stream of humanity flowing past.

The last major commission that Taft completed was two groups for the front entrance to the Louisiana State Capitol Building, dedicated in 1932.

He left unfinished a vast work to be called the Fountain of Creation which he planned to place at the opposite end of the Chicago Midway from the "Fountain of Time."[8] Parts of this work were donated to the University of Illinois at Urbana–Champaign and are now at the library and Foellinger Auditorium. The University named a dormitory and a street in Taft's honor.[9]

In 1965, his Chicago workplace at 6016 Ingleside Avenue (he moved there in 1906, when the building consisted merely of a brick barn) was designated a National Historic Landmark as Lorado Taft Midway Studios.[4] 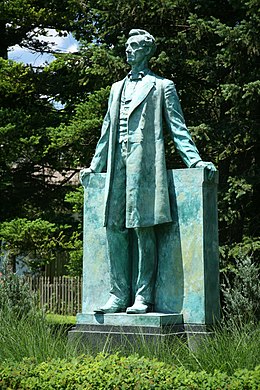 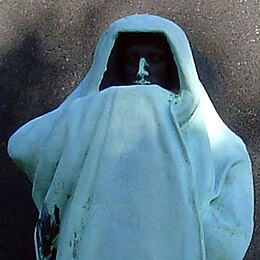 During his long career Taft acted as a mentor and teacher for many sculptors including: