Lohri is a popular winter Punjabi folk festival, celebrated primarily by Hindus, Sikhs and Muslims [9] from the Punjab region of the northern part of the Indian subcontinent, on 13 January of every year.[1][2] The significance and legends about the Lohri festival are many and these link the festival to the Punjab region.[3][4] Many people believe the festival commemorates the passing of the winter solstice.[5][6][7] Lohri marks the end of winter, and is a traditional welcome of longer days and the sun's journey to the northern hemisphere by Sikhs and Hindus in the Punjab region of the Indian subcontinent. It is observed the night before Makar Sankranti, also known as Maghi, and according to the solar part of the lunisolar Bikrami calendar and typically falls about the same date every year (January 13).[8]

Lohri is linked to the Bikrami calendar, and is celebrated the day before the festival of Maghi celebrated in India as Makar Sankranti. Lohri falls in the month of Paush and is set by the solar part of the lunisolar Punjabi calendar and in most years it falls around 13 January of the Gregorian calendar.

There is much folklore about Lohri. Lohri is the celebration of the arrival of longer days after the winter solstice. According to folklore, in ancient times Lohri was celebrated at the end of the traditional month when winter solstice occurs.[14][15] It celebrates the days getting longer as the sun proceeds on its northward journey. The day after Lohri is celebrated as Maghi Sangrand.[16]

Lohri is an ancient mid winter festival originating in regions near the Himalayan mountains where winter is colder than the rest of the subcontinent. Hindus traditionally lit bonfires in their yards after the weeks of the rabi season cropping work, socialized around the fire, sang and danced together as they marked the end of winter and the onset of longer days. After the night of bonfire celebrations, Hindus would mark Makar Sankranti and go to a sacred water body such as a river or lake to bathe.[17] 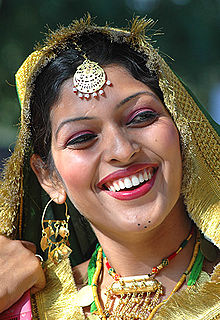 However, instead of celebrating Lohri on the eve of when winter solstice actually occurs, Punjabis celebrate it on the last day of the month during which winter solstice takes place. Lohri commemorates the passing of the winter solstice.[18]

The ancient significance of the festival is both as a winter crop season celebration[19] and a remembrance of the Sun deity (Surya). Lohri songs mention the Indian Sun god asking for heat and thanking him for his return. Other legends explain the celebration as a folk reverence for fire (Agni)[20] or the goddess of Lohri.[21]

Yet another folklore links Lohri to the tale of Dulla Bhatti. The central theme of many Lohri songs is the legend of Dulla Bhatti and lived in Punjab during the reign of Mughal Emperor Akbar.[22] He was regarded as a hero in Punjab, for rescuing Hindu girls from being forcibly taken to be sold in slave market of the Middle East.[23][22] Amongst those he saved were two girls Sundri & Mundri, who gradually became a theme of Punjab' folklore. As a part of Lohri celebrations, children go around homes singing the traditional folk songs of Lohri with "Dulla Bhatti" name included. One person sings, while others end each line with a loud "Ho!" sung in unison. After the song ends, the adult of the home is expected to give snacks and money to the singing troupe of youngsters.[22]

Lohri is celebrated with a bonfire. The lighting of bonfire during this winter festival is an ancient tradition.[24][25][26]

In Punjab, the harvest festival Lohri is marked by eating sheaves of roasted corn from the new harvest.[27] The January sugarcane harvest is celebrated in the Lohri festival.[28] Sugarcane products such as gurh and gachak are central to Lohri celebrations, as are nuts which are harvested in January. The other important food item of Lohri is radish which can be harvested between October and January. Mustard greens are cultivated mainly in the winter months because the crop is suitable to the agro-climatic conditions.[29] Accordingly, mustard greens are also a winter produce. It is traditional to eat Gajak, Sarson da saag with Makki di roti, radish, ground nuts and jaggery.[30] It is also traditional to eat "til rice" which is made by mixing jaggery, sesame seeds and rice.[31] In some places, this dish is called 'Tricholi.'

In various places of the Punjab, about 10 to 15 days before Lohri, groups of young and teenage boys and girls go around the neighbourhood collecting logs for the Lohri bonfire. In some places, they also collect items such as grains and jaggery which are sold and the sale proceeds are divided amongst the group.[32]

In some parts of Punjab, there is a popular "trick or treat" activity which is engaged in by boys to select a group member to smear his face with ash and tie a rope around his waist. The idea is for the selected person to act as a deterrent for people who refrain from giving Lohri items. The boys will sing Lohri songs asking for Lohri items. If not enough is given, the householder will be given an ultimatum to either give more or the rope will be loosened. If not enough is given, then the boy who has his face smeared will try to enter the house and smash clay pots or the clay stove.[32]

During the day, children go from door to door singing folk songs. These children are given sweets and savories, and occasionally, money. Turning them back empty-handed is regarded inauspicious. Where families are welcoming newly-weds and new borns,[33] the requests for treats increases.[32]

The collections gathered by the children are known as Lohri and consist of til, gachchak, crystal sugar, gur (jaggery), moongphali (peanuts) and phuliya or popcorn. Lohri is then distributed at night during the festival. Till, peanuts, popcorn and other food items are also thrown into the fire. For some, throwing food into the fire represents the burning of the old year and start the next year on Makar Sankranti

The bonfire ceremony differs depending on the location in Punjab. In some parts, a small image of the folk Lohri goddess is made with gobar (cattle dung) decorating it, kindling a fire beneath it and chanting its praises. The folk Lohri goddess is believed to be an ancient aspect of the celebration,[32] and is part of a long tradition of Winter solstice celebrations manifesting as a god or goddess.[34] In other parts, the Lohri fire consists of cow dung and wood with no reference to the Lohri goddess.

The bonfire is lit at sunset in the main village square. People toss sesame seeds, gur, sugar-candy and rewaries on the bonfire, sit around it, sing and dance till the fire dies out. Some people perform a prayer and go around the fire. This is to show respect to the natural element of fire,[35] a tradition common in winter solstice celebrations. It is traditional to offer guests til, gachchak, gur, moongphali (peanuts) and phuliya or popcorn. Milk and water are also poured around the bonfire by Hindus to thank the Sun God and seeking his continued protection.

Among some sections of the Sindhi community, the festival is traditionally celebrated as Lal Loi. On the day of Lal Loee children bring wood sticks from their grandparents and aunties and light a fire burning the sticks in the night with people enjoying, dancing and playing around the fire. The festival is gaining popularity amongst other Sindhis where Lohri is not a traditional festival.[36]

Lohri and the financial year

Historically, during the 19th century, revenue for winter crops was collected either on Lohri or Maghi.[37]

Lohri is celebrated to denote the last of the coldest days of winter. Apart from Punjab, Lohri is also celebrated in Delhi. Haryana and Himachal Pradesh. Lohri has been celebrated in Jammu since Mughal times.[38] The festival is observed as Lal Loi in the Sindhi community.[39][40][41][42]

In houses that have recently had a marriage or childbirth, Lohri celebrations will reach a higher pitch of excitement. Punjabis usually have private Lohri celebrations, in their houses. Lohri rituals are performed, with the accompaniment of special Lohri songs.

Singing and dancing form an intrinsic part of the celebrations. People wear their brightest clothes and come to dance the bhangra and gidda to the beat of the dhol. Punjabi songs are sung, and everybody rejoices. Sarson da saag and makki di roti is usually served as the main course at a Lohri dinner. Lohri is a great occasion that holds great importance for farmers. However, people residing in urban areas also celebrate Lohri, as this festival provides the opportunity to interact with family and friends.

There are many Lohri songs. For example, the following song which has words to express gratitude to Dulla Bhatti (the 'ho's are in chorus):[43]

Beautiful girl
Who will think about you
Dulla of the Bhatti clan will
Dulla's daughter got married
He gave one ser of sugar!
The girl is wearing a red suit!
But her shawl is torn!
Who will stitch her shawl?!
The uncle made choori!
The landlords looted it!
Landlords are beaten up!
Lots of simple-headed boys came!
One simpleton got left behind!
The soldier arrested him!
The soldier hit him with a brick!
(Cry or howl)!
Give us Lohri, long live your pair (to a married couple)!
Whether you cry, or bang your head later!

Another beautiful Lohri song is 'Tode upper Toda, Tode upper Saag' which the children sings at the time when they went to seek Lohri from the neighbours.

Other legends of the origin of Lohri festival

Some people believe that Lohri has derived its name from Loi, the wife of Saint Kabir. There is a legend amongst some people that Lohri comes from the word 'loh', which means the light and the warmness of fire. Lohri is also called lohi in rural Punjab. According to another legend Holika and Lohri were sisters. While the former perished in the Holi fire, the latter survived with Prahlad. Eating of til (sesame seeds) and rorhi is considered to be essential on Lohri day. Perhaps the words til and rorhi merged to become tilorhi, which eventually got shortened to Lohri.

Similar festivals in other countries

Winter solstice festivals have been incorporated into other festivals which are celebrated in various regions around the world. The festival of Yule is observed during Christmas celebrations whereby a log is burnt to commemorate the winter solstice.

The festival of Hogmanay is celebrated on new year’s day. The fire festival of Stonehaven in Scotland is the direct descendant of lighting winter solstice bonfires.[45] Another event is observed every 11 January when the flaming Clavie (a barrel full of staves) is carried round in Burghead and is wedged on the Doorie Hill. When it is burnt out, people take the smouldering embers to bring good luck for the coming year.[46]