Lodi Gardens or Lodhi Gardens is a city park situated in New Delhi, India. Spread over 90 acres (360,000 m2),[1] it contains, Mohammed Shah's Tomb, Tomb of Sikandar Lodi, Shisha Gumbad and Bara Gumbad,[2] architectural works of the 15th century by Lodis - who ruled parts of northern India and Punjab and Khyber Pakhtunkhwa province of modern-day Pakistan, from 1451 to 1526. The site is now protected by the Archaeological Survey of India (ASI).[1] 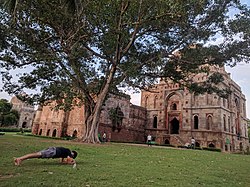 Lodi Gardens is popular for exercise and walking enthusiasts

The gardens are situated between Khan Market and Safdarjung's Tomb on Lodhi Road and is a hot spot for morning walks for the Delhites.

In the middle of the gardens is the Bara Gumbad ("Big Dome"), it consists of a large rubble-construct dome and is not a tomb[citation needed] but was constructed as a gateway to either the attached three domed masjid (mosque) or a large walled enclosure. Both the Bara Gumbad and the mosque were built in 1494 during the reign of Sikander Lodi, there is also a residence surrounding a central courtyard, where the remains of a water tank can be seen. Opposite the Bara Gumbad is the Shisha Gumbad ("mirror dome") for the glazed tiles used in its construction, which contains graves, whose occupants are not clearly identifiable (either an unknown family of Sikandar Lodi's court or Bahlul Lodi).[3][4]

Further into the gardens, are remains of a watercourse which connects the Yamuna River to Tomb of Sikandar Lodi. This tomb still has the battlements enclosing it. Nearby to Sikander's tomb is the Athpula ("Eight Piered") Bridge, the last of the buildings in Delhi, built during the reign of Mughal Emperor Akbar,[5] it contains seven arches, amongst which the central one being the largest. The tomb of Mohammed Shah, the last of the Sayyid dynasty rulers, the earliest of the tombs in the garden, was built in 1444 by Ala-ud-din Alam Shah as a tribute to Mohammed Shah. The tomb is octagonal in shape, with numerous ornamental Hindu-style chhatris around the central dome, numerous arches, verandahs and sloping buttresses. There are turrets at each corner. The main tomb is supported by a 16-sided drum. It is of a flattened type and is surrounded by chhatris, which make it look diminutive compared to its substantially larger base. Several years later, the Tomb of Sikandar Lodi seems to have been copied from this Sayyid tomb.[6]

As there is little architecture from these two periods remaining in India, Lodi Gardens is an important place of preservation. The tomb of Mohammed Shah is visible from the road, and is the earliest structure in the gardens. It is a good example of a combination of the Hindu and Islamic styles of architecture. The Hindu features include eight chhatris, each of them capped by a lotus finial with a decorative band around the base; corner ornamental pinnacles (guldastas)and chhajja.[7]