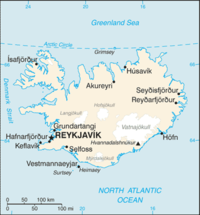 Most Icelandic municipalities consist of several cities or towns.[1] For example, four localities (Selfoss, Stokkseyri, Eyrarbakki, and Tjarnabyggð) can all be found in the municipality of Árborg.

Some municipalities, such as Hafnarfjörður and Akranes, also share the same name with a locality. However, these localities are not always situated in their namesake municipalities. In those cases, this does not necessarily mean that they there are no other localities included in that particular municipality. Even when they are the only locality there, they do not always encompass the span of that municipality's entire land area.[3]

Localities shaded in pale green in the table are their respective regional capitals. The majority of the functions that are carried out by local governments actually happen at the municipal level. However, most settlements in Iceland are broken down further into the "locality" level, which are mainly used for and information collection and statistical analysis purposes only—they are the regional equivalent of a census division.