A sports rivalry is intense competition between athletic teams or athletes, affecting participants,[1] management, and supporters all to varying degrees.

The intensity of the rivalry can range anywhere from a light hearted banter to serious violence. A rivalry that gets out of control can lead to fighting, hooliganism, rioting and some instances with career-ending and even fatal consequences. In "The football war", along with other factors, it was suggested to have been the tipping point in leading to military conflicts.

Owners have been known to encourage rivalries as they tend to improve game attendance and television ratings for rivalry matches. Clubs can reduce fan aggression surrounding rivalry games by acknowledging rather than downplaying the conflict[2] because the rivalry is an integral part of fan identity.[3]

Games between two rivals that are based in areas of close geographical proximity are often known as a local derby, or simply just a derby (UK: /ˈdɑːrbi/ DAR-bee, US: /ˈdɜːrbi/ DUR-bee); a sporting event between two teams from the same town, city or region. The term is usually connected with association football[4] and the media and supporters will often refer to this fixture as Derby Day.[5] 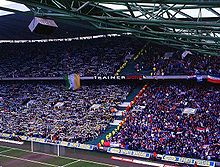 Fans separated at an Old Firm derby in Glasgow, Scotland.

The term "derby" possibly originated from The Derby, a horse race in England, founded by the 12th Earl of Derby in 1780. The 19th Earl has since claimed the Derby name was originally only given to one other sporting event: Rugby league fixtures between St Helens at one end of the family's Knowsley estate and Wigan at the other.[6]

The other theory as to the name's origin involves Shrovetide football, an early, unofficiated version of both association and rugby football. It was first played in the town of Derby prior to Medieval times. From as early as the 12th century it was known to have been played in Ashbourne. It was a chaotic and exuberant affair that involved the whole town, often resulting in fatalities. The goals were at Nuns Mill in the north and the Gallows Balk in the south of the town, and much of the action took place in the River Derwent or the Markeaton Brook. Nominally the players came from All Saints' and St Peter's parishes, but in practice the game was a free-for-all with as many as 1,000 players. A Frenchman who observed a match in 1829 wrote in horror, 'if Englishmen call this play, it would be impossible to say what they call fighting'. Shrovetide football is still an annual event in the town of Ashbourne.[7]

Since at least as early as 1840 'derby' has been used as a noun in English to denote any kind of sporting contest.[8] Other names for derbies include Clásicos in certain parts of the world and crosstown rivalries in the United States.

Rivalries do not always stem from the sharing of an area. Hostilities can occur for different reasons, such as in the case of El Clásico with tensions between fans with a background of historically cultural and political differences. Frequent meetings in important games between teams can also lead to unpleasantries.

Lafayette won the 142nd edition of "The Rivalry" against Lehigh

Main article: Rivalries in the KHL