Dyer began his senior career with West Bromwich Albion, and had loan spells with Kidderminster Harriers, Coventry City and Queens Park Rangers before joining Millwall. After half a season, he moved on to Milton Keynes Dons, where he spent two years. In 2008, he signed for Leicester City, where he played for six seasons, and joined Watford in 2014. He spent the latter part of the 2014–15 season on loan at Birmingham City. After being released by Watford, Dyer signed for Burnley in February 2016 until the end of the season. He joined Burton Albion in July 2016 and spent two seasons at the club before moving on to Bolton.

Dyer started his career with the Aston Villa youth system in 1999, before joining West Bromwich Albion in July 2001.[3] He made his Albion debut in a 3–1 League Cup defeat away at Wigan Athletic on 2 October 2002, but it was the only first team match he played in 2002–03.[4] In September 2003 he spent a month on loan to Kidderminster Harriers.[5] He turned down an extension to the loan, instead opting to fight for his place in the Albion team.[6] This eventually paid off, as during the second half of the 2003–04 season, he played a large part in West Brom's promotion back to the Premier League. Dyer's exciting and pacey substitute appearances often inspired the team,[citation needed] and earned him a new contract in the summer of 2004.[7] However, it was still not enough to cement a regular first-team starting place, and in March 2005 he was loaned out to Coventry City.[8] In September 2005 he went on loan again, this time to Queens Park Rangers.[9]

Dyer left West Bromwich Albion for Millwall during the January 2006 transfer window,[10] but was released just two months later for personal reasons.[11] Due to the transfer window having already closed, Dyer was unable to sign for another club for the remainder of the season. He had a trial with Derby County, with whom he trained,[12] but the Rams elected not to sign him. He instead joined Milton Keynes Dons, signing a two-year contract in July 2006.[13]

His performances during October 2007 earned him the League Two Player of the Month award. Awards panel chairman Chris Kamara said "One of Lloyd Dyer's great strengths is his energy; he's able to motor up and down the left side all day and provides terrific service to his strikers. He's also added goals to his game this month".[14] Dyer received the first red card of his career on 3 November in a 1–1 draw with Wycombe Wanderers.[15][16] He scored twice in the Dons' 5–0 home win over Accrington Stanley on 8 December, earning himself a place in the League Two Team of the Week.[17][18] On 26 April 2008, Dyer set up one goal and scored another as Milton Keynes beat Bradford City 2–1, a result that confirmed the Dons as League Two champions.[19] 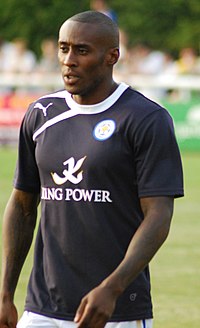 Dyer training with Leicester City in 2013

On 1 July 2008, Dyer signed a three-year contract with Leicester City on a free transfer, becoming manager Nigel Pearson's second signing after Michael Morrison.[20] He made his debut on the opening day of the 2008–09 season in a 2–0 win over his former club Milton Keynes Dons on 9 August.[21][22] He scored his first two goals for Leicester in a 4–0 win over Cheltenham Town on 30 August.[23] Dyer was in blistering form, scoring ten league goals to help Leicester secure their promotion as League One champions.[24][25]

Dyer committed his long-term future to Leicester in September 2010 by signing a new four-year deal, keeping him at the club until June 2014.[28]

Dyer was in fantastic form when Leicester beat Ipswich Town 6–0 at the King Power Stadium. He won a penalty, set up goals for Anthony Knockaert and Marko Futacs as well as scoring one himself. Assistant manager Craig Shakespeare praised Dyer after the match by saying he was playing some of the best football of his career.[citation needed]

On 27 August 2013, Dyer captained Leicester City for the first time in the 5–2 League Cup victory against Carlisle United and also scored the second goal as well as turning provider for Anthony Knockaert for his goal. He was given Man of the Match.

Despite being offered an extension to his contract at Leicester, Dyer signed for Championship club Watford on a three-year deal on 12 June 2014.[30] He made his debut on the opening day of the 2014–15 season, replacing Daniel Pudil in the 83rd minute of a 3–0 home win against Bolton Wanderers. Three days later, on 12 August, he scored the only goal in Watford's 1–0 League Cup victory at Stevenage. On 19 August, Dyer scored his first league goal for Watford in a 2–0 win at Rotherham United, and following his goal appeared to shout abuse towards the bench at manager Giuseppe Sannino.[31][32] On 2 February 2016, Dyer was freed from the remainder of his contract with Watford.[33]

Dyer joined fellow Championship club Birmingham City on 19 January 2015 on loan for the rest of the season.[34] He made an eventful debut. Replacing the rested Demarai Gray in the starting eleven for the FA Cup visit of West Bromwich Albion, his centre was steered past goalkeeper Boaz Myhill by Jonathan Grounds for Birmingham's goal in the 2–1 defeat, and in the second half, he collided with Myhill who injured a finger and had to be replaced.[35][36] He scored his first goal for Birmingham in the last home match of the season to give his team a 1–0 victory over Charlton Athletic,[37] and finished the season with 19 appearances.[38]

Dyer signed for Championship club Burnley on 15 February 2016 on a short-term deal until the end of the season.[39]

At the end of the 2017–18 season, following their relegation, Dyer was initially offered a new contract by Albion, but his departure from the club was confirmed in July.[43][44]

On 24 September 2018, he signed a short-term contract with Championship club Bolton Wanderers.[45] He made his debut for Wanderers on 6 October 2018 against Blackburn Rovers as a second-half substitute for Craig Noone.[46]

On 25 September 2019, Dyer returned to Burton Albion signing a short-term deal[47] and made his debut later that day as a substitute in the 2-0 EFL Cup win over AFC Bournemouth.[48]

Dyer was born in Birmingham, West Midlands.[1] He is the brother of former Montserrat international Wayne Dyer.[49]

Dyer playing for Leicester City in 2010