Livonian (Livonian: līvõ kēļ or rāndakēļ) is a Finnic language. Although its last native speaker died in 2013,[1][6] it has been revived with about 40 reported speakers and 210 having reported some knowledge of the language. The native land of the Livonian people is the Livonian Coast of the Gulf of Livonia, located in the north of the Kurzeme peninsula in Latvia. Possibly unique among the Uralic languages, Livonian has been described as a pitch-accent language (see below).[7]

Some ethnic Livonians are learning or have learned Livonian in an attempt to revive it, but because ethnic Livonians are a small minority, opportunities to use Livonian are limited. The Estonian newspaper Eesti Päevaleht erroneously announced that Viktors Bertholds, who died on 28 February 2009, was the last native speaker who started the Latvian-language school as a monolingual.[8] Some other Livonians had argued, however, that there were some native speakers left,[9] including Viktors Bertholds' cousin, Grizelda Kristiņa. Kristiņa died in 2013.[1] An article published by the Foundation for Endangered Languages in 2007 stated that there were only 182 registered Livonians and a mere six native speakers. In a 2009 conference proceeding, it was mentioned that there could be "at best 10 living native" speakers of the language.[10]

The language is taught in universities in Latvia, Estonia and Finland, which constantly increases the pool of second-language speakers who do not constantly reside in Latvia.

Title page in German of the Gospel of Matthew in Livonian, 1863

In the 19th century, about 2,000 people still spoke Livonian; in 1852, the number of Livonians was 2,394.[11] Various historical events have led to the near total language death of Livonian:

In the 13th century, the native Livonians inhabited the Estonian counties Alempois, Jogentagana Järva, Läänemaa, Mõhu, Nurmekund, Sakala, Ugandi, and Vaiga in the north, and by the Daugava in the south[citation needed]. The Livonian settlement of Curonia was also begun then.[14] In the 12th-13th centuries the Livonian lands were conquered by the Teutonic Order. The conquest led to a strong decrease in the number of speakers of the Livonian language, empty Livonian lands inhabited by the Latvians, which contributed to the replacement of the Livonian language in favor of Latvian.[15] It is estimated that at the time of the German colonization, there were 30,000 Livonians.[16] In the 19th century the number of speakers of the Couronian dialect is estimated as follows: 2,074 people in 1835, 2,324 people in 1852, 2,390 people in 1858, 2,929 people in 1888.[17] According to the Soviet Census of 1989, 226 people were Livonian, and almost half of them spoke Livonian.[18] According to estimates of the Liv Culture Center in 2010, only 40 people spoke Livonian in everyday life. In 2013, there were none who spoke Livonian in everyday life.[19]

The first Livonian words were recorded in the Livonian Chronicle of Henry.[20] The first written sources about Livonian appeared in the 16th century. The collection of Livonian poems "Mariners sacred songs and prayers" (Latvian: Jūrnieku svētās dziesmas un lūgšanas) was translated to Latvian by Jānis Prints and his son Jānis Jr. was published in 1845.[21][22] The first book in Livonian was the Gospel of Matthew, and was published in 1863 in London in both the eastern and western Courland dialects.[23] It was translated to eastern Couronian by Nick Pollmann, and to western Couronian by Jānis Prints and Peteris. The plan with the book was to establish a standard orthography by F. Wiedemann, which consisted of 36 letters with many diacritics. The total circulation was 250 copies.[24] The Livonians received only one copy of each dialect.[25] The second book in Livonian was the same Gospel of Matthew, published in 1880 in St. Petersburg, with an orthography based on Latvian and German.[24][26]

In the interwar period, there were several dozen books published in Livonian, mainly with the help of Finnish and Estonian organizations.[23] In 1930, the first newspaper in Livonian, "Līvli", was published. In 1942, a translation of the New Testament was published in Helsinki. It was translated by Kōrli Stalte, with help from the Finnish linguist Lauri Kettunen.[27] After the war, books in Livonian were no longer published,[28] as Latvia was occupied by the Soviet Union.

After Latvia regained its independence, the newsletter "Õvâ" was published in Livonian in 1994, dedicated to the Livonian culture, art and figures of the national movement, and in 1998 with the support of the "Open Society", the first collection of poetry anthology in Livonian "Ma akūb sīnda vizzõ, tūrska!" was published and presented in Finland and Estonia, and it combines the works of famous Livonian poets.[29][30] To date, the only Livonian media outlet is trilingual (English-Latvian-Livonian) livones.lv (livones.net) operated by the Liv Culture Center.[30][31]

Speakers of Livonian in the twenty-first century 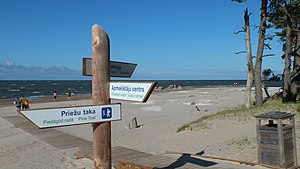 Trilingual signposts in Latvian, Livonian and English at the Livonian Coast 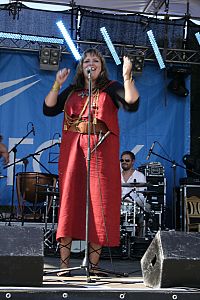 Viktors Bertholds (July 10, 1921 – February 28, 2009),[32][33] one of the last Livonian speakers of the generation who learnt Livonian as first language in a Livonian-speaking family and community, died on February 28, 2009. Though it was reported that he was the last native speaker of the language, Livonians themselves claimed that there are more native speakers still alive, albeit very few.[34]

As reported in the Estonian newspaper Eesti Päevaleht,[35] Viktors Bertholds was born in 1921 and probably belonged to the last generation of children who started their (Latvian-medium) primary school as Livonian monolinguals; only a few years later it was noted that Livonian parents had begun to speak Latvian with their children. During World War II, Bertholds, unlike most Livonian men, managed to avoid being mobilized in the armies of either occupation force by hiding in the woods. After the war, Bertholds worked in various professions and shared his knowledge of Livonian language with many field linguists; in the 1990s, he also taught Livonian in children's summer camps.

Bertholds' Livonian-speaking brother and wife died in the 1990s. In the early 2000s, many other prominent "last Livonians" also died, such as Poulin Klavin (1918–2001), keeper of many Livonian traditions and the last Livonian to reside permanently on the Courland coast, and Edgar Vaalgamaa (1912–2003), clergyman in Finland, translator of the New Testament and author of a book on the history and culture of the Livonians.[36][37]

Supposedly the last native speaker of Livonian was Grizelda Kristiņa, née Bertholde (1910–2013, a cousin of Viktors Bertholds), who lived in Canada from 1949.[38] According to Valts Ernštreits, she spoke Livonian as well "as if she had stepped out of her home farm in a Livonian coastal village just yesterday".[39] and qualified as the last living native speaker of the Livonian language of her generation. She died on June 2, 2013.[40]

The survival of the Livonian language now depends on young Livonians who learned Livonian in their childhood from grandparents or great-grandparents of the pre-war generations. There are not many of them, though there are a few hundred ethnic Livonians in Latvia now who are interested in their Livonian roots. Some young Livonians not only sing folk-songs in Livonian but even strive to use Livonian actively in everyday communication. One such younger generation Livonian speaker is Julgī Stalte [lv; et], who performs with the Livonian-Estonian world music group Tuļļi Lum.[41]

All vowels can be long or short. Short vowels are written as indicated in the table; long vowels are written with an additional macron ("ˉ") over the letter, so, for example, [æː] = ǟ. The Livonian vowel system is notable for having a stød similar to Danish. As in other languages with this feature, it is thought to be a vestige of an earlier pitch accent.

Livonian has also a large number of diphthongs, as well as a number of triphthongs. These can also occur short or long.

The two opening diphthongs /ie/ and /uo/ vary in their stress placement depending on length: short ie, uo are realized as rising [i̯e], [u̯o], while long īe, ūo are realized as falling [iˑe̯], [uˑo̯]. The same applies to the triphthongs uoi : ūoi.[44]

The Livonian alphabet is a hybrid which mixes Latvian and Estonian orthography.

Language contacts with Latvians and Estonians

Livonian has for centuries been thoroughly influenced by Latvian in terms of grammar, phonology and word derivation etc. The dative case in Livonian, for example, is very unusual in a Finnic language.[45] There are about 2,000 Latvian and 200 German loanwords in Livonian and most of the German words were adopted through Latvian.[46] Latvian, however, was influenced by Livonian as well. Its regular syllable stress based on Livonian is very unusual in a Baltic language. Especially as of the end of the nineteenth century there was a great deal of contact with Estonians, namely between (Kurzeme) Livonian fishers or mariners and the Estonians from Saaremaa or other islands. Many inhabitants of the islands of Western Estonia worked in the summer in Kurzeme Livonian villages. As a result, a knowledge of Estonian spread among those Livonians and words of Estonian origin also came into Livonian.[47] There are about 800 Estonian loanwords in Livonian, most of which were borrowed from the Saaremaa dialect.[48]