Livonian Brothers of the Sword

The Livonian Brothers of the Sword (Latin: Fratres militiæ Christi Livoniae, German: Schwertbrüderorden, French: Ordre des Chevaliers Porte-Glaive) was a Catholic military order established by Albert, the third bishop of Riga (or possibly by Theoderich von Treyden), in 1202. Pope Innocent III sanctioned the establishment in 1204 for the second time. The membership of the order comprised German "warrior monks" who fought Baltic and Finnic pagans in the area of modern-day Estonia, Latvia and Lithuania. Alternative names of the Order include Christ Knights, Swordbrothers, Sword Brethren, and The Militia of Christ of Livonia. The seal reads: +MAGISTRI ETFRM (et fratrum) MILICIE CRI (Christi) DE LIVONIA.

Following their defeat by the Samogitians and Semigallians in the Battle of Schaulen (Saule) in 1236, the surviving Brothers merged into the Teutonic Order as an autonomous branch and became known as the Livonian Order. 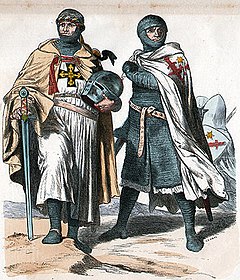 A Teutonic Knight on the left and a Swordbrother on the right.

Albert of Riga realized that standing-army in Livonia would be more useful than crusaders staying a short time. As rewards for secular knights in the Baltic area were not enough to ensure their long-terms stance, Albert decided to found his order.[1]

Albert, Bishop of Riga (also called Prince-Bishop of Livonia) (or possibly Theoderich von Treyden),[2] founded the Brotherhood in 1202 to aid the Bishopric of Livonia in the conversion of the pagan Livonians, Latgalians and Selonians living across the ancient trade routes from the Gulf of Riga eastwards.

In the beginning, the main duty of the Livonian Brothers was to protect priests and missionaries.  The characteristics of the territory brought a moral challenge for the crusaders due to Livs and Letts didn't own land that was previously Christian. Therefore, they didn't have any justification to attack them.[1]

The division of conquered territory also was a problem faced by the order. Swordbrothers were to garrison the built castles to maintain the control along the Daugava. However, garrison duties didn´t imply ownership.

Albert of Riga established that one-third of any new territory could be retained by the order. Meanwhile, the rest of the territory was handed over to the bishop.[1]

In 1205, the first battle of the Livonian brothers occurred. The Semigallian duke Viesthard visited Riga to request the help of the Swordbrothers after a local Semigallian tribe was devasted by the Lithuanians. The brotherhood was reluctant to go to war due to the absence of the bishop Albert. However, Viesthard successfully persuaded Swordbrothers. They prepared an ambush against the Lithuanians that were returning with the booty, where the Lithuanian leader was beheaded.[1]

In 1206, the Duke Vladimir of Polozk demanded tribute from the inhabitants of the Daugava when the terms of service of the crusaders expired. The Swordbrothers, with the help of the remained crusaders, beat the Russians troops that arrived suddenly to Daugava.[1]

In 1207, the Swordbrothers faced an attack from Lithuania launched during the winter. The Swordbrothers and allies stayed at the castle of Lennewarden on the north of the Daugava. Lithuanian army challenged the order to battle and was defeated by the Order. This victory served to show the value of the castle line along the river.[1]

From its foundation, the undisciplined Order tended to ignore its supposed vassalage to the bishops. In 1218, Albert asked King Valdemar II of Denmark for assistance, but Valdemar instead arranged a deal with the Brotherhood and conquered northern Estonia (now known as Danish Estonia) for Denmark.

The Brotherhood had its headquarters at Fellin (Viljandi) in present-day Estonia, where the walls of the Master's castle still[update] stand. Other strongholds included Wenden (Cēsis), Segewold (Sigulda) and Ascheraden (Aizkraukle). The commanders of Fellin, Goldingen (Kuldīga), Marienburg (Alūksne), Reval (Tallinn), and the bailiff of Weißenstein (Paide) belonged to the five-member entourage of the Order's Master.

Pope Gregory IX asked the Brothers to defend Finland from the Novgorodian attacks in his letter of November 24, 1232.[3] However, no known information regarding the knights' possible activities in Finland has survived. (Sweden eventually conquered Finland following the Second Swedish Crusade in 1249.)

The Order was decimated in the Battle of Schaulen (Saule) in 1236 against Lithuanians and Semigallians.[4] This disaster led the surviving Brothers to become incorporated into the Order of Teutonic Knights in the following year, and from that point on they became known as the Livonian Order.[4] They continued, however, to function in all respects (rule, clothing and policy) as an autonomous branch of the Teutonic Order, headed by their own Master (himself de jure subject to the Teutonic Order's Grand Master).