Advertisement - You can get this game from STEAM
For other uses, see Liverpool (disambiguation).
Village in New York, United States

Liverpool is a lakeside village in Onondaga County, New York, United States. Its population was 2,347 at the 2010 census.[3] The name was adopted from the city of Liverpool in the United Kingdom.[4] The village is on Onondaga Lake, in the western part of the town of Salina and is northwest of Syracuse, of which it is a suburb. 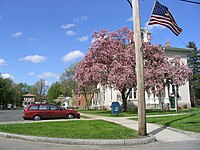 Liverpool in early May

The area was originally inhabited by the Iroquois, starting in the 16th century. In the mid-17th century, Canadian French Jesuits visited the area, setting up missions. These were not permanent, however. An example of these missions is Sainte Marie among the Iroquois, on Onondaga Lake just outside the village. Once the (Erie Canal) and (Oswego Canal) were built, the area was settled by Irish canal workers, Yankee settlers, and, later, German immigrants. The early recorded name for the village was "Little Ireland".

The Lucius Gleason House and Liverpool Cemetery are listed on the National Register of Historic Places.[5][6]

The Salt Museum on the shore of Onondaga Lake in 2015

Early industries included several salt works in the 19th century and a sawmill. Liverpool played an important role in the salt industry on the shores of Onondaga Lake. A history of the area's salt mining can be found at the Salt Museum.

The New York State surveyor general laid out the streets in the village and changed its name from "Little Ireland" to Liverpool. The village was incorporated on April 20, 1830.[7] It was named after the city of Liverpool in England. This was probably done because like its eponym, Liverpool also produced salt, and village leaders wanted to capitalize on the name of another famous salt-producing region.

The hotel business was booming. George Ingersoll built the Globe Hotel. Liverpool was also a cigar manufacturing center during the 1890s.[7] In 1918, the Oswego Canal was closed. Onondaga Lake Park, established in 1931, is now the location of much of the old canal bed.

According to the United States Census Bureau, the village has an area of 0.8 square miles (2.1 km2), all of it land.

Liverpool is also home to a Lockheed Martin factory. 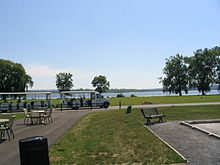 Onondaga Lake Park is a county park on the eastern shore of Onondaga Lake outside of Syracuse at 6790 Onondaga Lake Trail in Liverpool.[9] The park is home to the Salt Museum and the East Shore Recreation Trail.[9]