Little Falls is a township in Passaic County, New Jersey, United States. The township was named for a waterfall on the Passaic River at a dam near Beattie Mill.[19][20]

Little Falls traces its first settlement to 1711 when seven Bergen Dutch settlers banded together to begin farming.[22] The Speer Homestead dates from circa 1785 (and may have originally been built in 1680).[23]

The Morris Canal, once an important artery of trade and transportation until 1925 between the Delaware and Hudson rivers, wound its way through the township and vestiges of it still remain,[24] some parts of which are a greenway.[25][26]

Little Falls was incorporated as a township by an act of the New Jersey Legislature on April 2, 1868, from portions of Acquackanonk Township. On March 25, 1914, portions of the township were taken to form the borough of West Paterson (now Woodland Park).[27]

The township has three main sub-divisions. Great Notch is the easternmost part of Little Falls. The downtown area is frequently referred to as "The Center of Town", mainly by longtime residents, and is usually referred to as simply Little Falls. Singac is in the westernmost portion of the township. Much of Singac borders the Passaic River.[32][33]

Little Falls is bordered by the municipalities of Clifton, Totowa, Wayne, and Woodland Park in Passaic County, and Cedar Grove, Fairfield, Montclair, and North Caldwell in Essex County.[34][35][36] It is located about 15 miles (24 km) west of New York City.

The New Jersey Jackals of the Frontier League play at Yogi Berra Stadium, located in Little Falls on the campus of Montclair State University.[50]

Effective January 1, 2005, the form of government in Little Falls was changed (based on the results of a public referendum passed in November 2003) to the Mayor-Council form authorized by the Faulkner Act. The township is one of 71 of 565 municipalities statewide that use this form of government.[51] The governing body is comprised of the Mayor and the five-member Township Council. Voters directly elect the mayor and the five township council members to four-year terms of office on a staggered basis, with either three seats or two seats (together with the mayoral seat) up for election in even-numbered years as part of the November general election. For most of its history, until 2003, Little Falls had been governed under the Township form of government by a township committee consisting of five committee members elected by the voters. Under this system, a chairman (mayor) and deputy-chair (deputy mayor) were selected annually by the Township Committee members.[7][52]

In January 2017, Democrat Chris Vancheri was appointed to fill the council seat expiring in December 2018 that was vacated by James Damiano when he took office as mayor. In April 2017, Republican Marc Benitez was appointed to fill a vacant seat expiring in December 2018 that had been held by Joseph Maceri until he resigned after moving out of the township.[58] In the November 2018 general election, Vancheri was elected to serve the balance of the term of office and Democrat Tanya Seber defeated Benitez for the unexpired seat. When Seber and Vancheri were sworn into office, it marked the first time in township history that all of the township's elected officials were Democrats.[59]

Post (who returned to using her maiden name of Conti as of January 2015[60]) won election to a full four-year term as mayor in the 2012 general election, along with all three of her Republican running mates for Township Council; Louis Fontana, Pamela Porter and Joseph Rento (who won the balance of an unexpired term of office).[61][62]

Little Falls is located in the 11th Congressional District[63] and is part of New Jersey's 40th state legislative district.[10][64][65] Prior to the 2010 Census, Little Falls had been part of the 8th Congressional District, a change made by the New Jersey Redistricting Commission that took effect in January 2013, based on the results of the November 2012 general elections.[66]

For the 2018–2019 session (Senate, General Assembly), the 40th Legislative District of the New Jersey Legislature is represented in the State Senate by Kristin Corrado (R, Totowa) and in the General Assembly by Kevin J. Rooney (R, Wyckoff) and Christopher DePhillips (R, Wyckoff).[71][72]

For ninth through twelfth grades, students in public school attend Passaic Valley Regional High School, which also serves students from Totowa and Woodland Park. The school facility is located in Little Falls.[105][106] As of the 2018–19 school year, the high school had an enrollment of 1,186 students and 102.0 classroom teachers (on an FTE basis), for a student–teacher ratio of 11.6:1.[107] Seats on the high school district's nine-member board of education are allocated based on the population of the constituent municipalities, with three seats each assigned Little Falls, Totowa and Woodland Park.[108]

Most of Montclair State University is located in Little Falls. During 2011, the university employed 66 residents on a full or part-time basis, who earned almost $3.5 million in total compensation.[109] 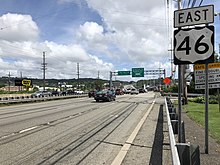 US 46 eastbound in Little Falls

Little Falls is criss-crossed by several major roadways, including U.S. Route 46 and New Jersey Route 23. The Garden State Parkway and Interstate 80 run near the municipality. There are numerous crossings of the Upper Passaic River in town.

The Little Falls station and Montclair State University station of NJ Transit both serve Little Falls, offering service on the Montclair-Boonton Line to Hoboken Terminal in Hoboken, or from Montclair State University Station on Midtown Direct trains to New York City's Pennsylvania Station in Midtown Manhattan via the Secaucus Junction. The township was formerly served by the Great Notch station until NJ Transit closed it in January 2010 because of low ridership.[111]

People who were born in, residents of, or otherwise closely associated with Little Falls include: