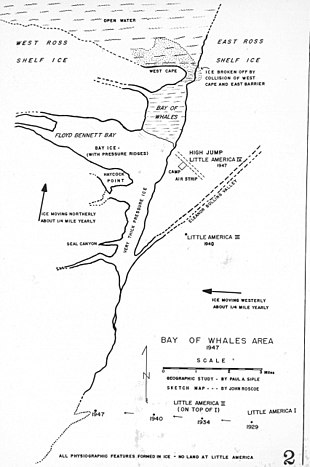 Little America was a series of Antarctic exploration bases from 1929 to 1958, located on the Ross Ice Shelf, south of the Bay of Whales.

The coordinates are approximate.

The first base in the series was established in January 1929 by Richard Byrd,[1] and was abandoned in 1930.[2] This was where the film With Byrd at the South Pole (1930) was filmed, about Byrd's trip to the South Pole.

During the 1934–1935 expedition, many souvenir letters were sent from Little America, using a commemorative postage stamp issued by the U.S. government. The souvenir cancellation operations were conducted under extremely difficult conditions.[3]

Little America established the first successful radio broadcasting from Antarctica, making regular broadcasts that could be picked up by household radio sets in the United States, more than 11,000 miles away around the Earth's curvature.

In 1940 a huge, extraordinary, exploration vehicle, the Antarctic Snow Cruiser, was brought to Little America III. Unfortunately, the vehicle was found to have a number of design and technical weaknesses and was little used. Abandoned, it became buried in the snow. It was last rediscovered in 1958, but has subsequently been lost once again, either under the snow, or under the waters of the Southern Ocean.