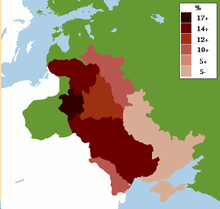 Map showing percentage of Jews in the Pale of Settlement in the Russian Empire c. 1905

Lithuanian Jews or Litvaks are Jews with roots in the territory of the former Grand Duchy of Lithuania, split among the present-day Lithuania, Belarus, Latvia, northeastern Suwałki and Białystok region of Poland, as well as some border areas of Russia and Ukraine. The term is sometimes used to cover all Orthodox Jews who follow a "Lithuanian" (Ashkenazi, non-Hasidic) style of life and learning, whatever their ethnic background.[2] The area where Lithuanian Jews lived is referred to in Yiddish as ליטע Lite, hence the Hebrew term Lita'im (לִיטָאִים‎).[3]

Lithuania was historically home to a large and influential Jewish community that either fled the country or were murdered during The Holocaust in Lithuania. Before World War II, the Lithuanian Jewish population was some 160,000, about 7% of the total population.[4] Vilnius had a Jewish community of nearly 100,000, about 45% of the city's total population.[5] There were over 110 synagogues and 10 yeshivas in Vilnius alone.[6] About 2,000 Jews were counted in Lithuania during the 2005 census.[7]

The Yiddish adjective ליטוויש Litvish means "Lithuanian": the noun for a Lithuanian Jew is Litvak. The term Litvak itself originates from Litwak, a Polish term denoting "a man from Lithuania", which however went out of use before the 19th century, having been supplanted in this meaning by Litwin, only to be revived around 1880 in the narrower meaning of "a Lithuanian Jew". The "Lithuania" meant here is the territory of the former Grand Duchy of Lithuania.

Of the main Yiddish dialects in Europe, the Litvishe Yiddish (Lithuanian Yiddish) dialect was spoken by Jews in Lithuania, Belarus, Latvia, Estonia and northeastern Poland, including Suwałki, Łomża, and Białystok.

However, following the dispute between the Hasidim and the Misnagdim, in which the Lithuanian academies were the heartland of opposition to Hasidism, "Lithuanian" came to have the connotation of Misnagdic (non-Hasidic) Judaism generally, and to be used for all Jews who follow the traditions of the great Lithuanian yeshivot, whether or not their ancestors actually came from Lithuania. In modern Israel, Lita'im (Lithuanians) is often used for all Haredi Jews who are not Hasidim (and not Hardalim or Sephardic Haredim). Other expressions used for this purpose are Yeshivishe and Misnagdim. Both the words Litvishe and Lita'im are somewhat misleading, because there are also Hasidic Jews from greater Lithuania and many Lithuanian Jews who are not Haredim. The term Misnagdim ("opponents") on the other hand is somewhat outdated, because the opposition between the two groups has lost much of its relevance. Yeshivishe is also problematic because Hasidim now make use of yeshivot as much as the Litvishe Jews.

The characteristically "Lithuanian" approach to Judaism was marked by a concentration on highly intellectual Talmud study. Lithuania became the heartland of the traditionalist opposition to Hasidism. Though outnumbered and named "misnagdim" (opposers) by the Hasidim, the Lithuanian traditionalists believed that their standard Rabbinic Judaism predated Hasidism and was Judaism in its original and authentic form. Differences between the groups grew to the extent that in popular perception "Lithuanian" and "misnagged" became virtually interchangeable terms. However, a sizable minority of Lithuanian Jews belong(ed) to Hasidic groups, including Chabad, Slonim (Hasidic dynasty), Karlin (Pinsk), and Koidanov. With the spread of the Enlightenment, many Lithuanian Jews became devotees of the Haskala (Jewish Enlightenment) movement in Eastern Europe pressing for better integration into European society, and today, many leading academics, scientists, and philosophers are of Lithuanian Jewish descent.

In theoretical Talmud study, the leading Lithuanian authorities were Chaim Soloveitchik and the Brisker school; rival approaches were those of the Mir and Telshe yeshivas. In practical halakha, the Lithuanians traditionally followed the Aruch HaShulchan, though today, the "Lithuanian" yeshivas prefer the Mishnah Berurah, which is regarded as both more analytic and more accessible.

In the 19th century, the Orthodox Ashkenazi residents of the Holy Land, broadly speaking, were divided into Hasidim and Perushim, who were Lithuanian Jews influenced by the Vilna Gaon. For this reason, in modern-day Israeli Haredi parlance the terms Litvak (noun) or Litvisher (adjective), or in Hebrew Litaim, are often used loosely to include any non-Hasidic Ashkenazi Haredi individual or institution. Another reason for this broadening of the term is the fact that many of the leading Israeli Haredi yeshivas (outside the Hasidic camp) are successor bodies to the famous yeshivot of Lithuania, though their present-day members may or may not be descended from Lithuanian Jewry. In reality, both the ethnic make-up and the religious traditions of the misnagged communities are much more diverse. Customs of Lithuanian non-Hasidic Jews consist of:

Main article: History of the Jews in Lithuania

Jews began living in Lithuania as early as the 13th century.[citation needed] In 1388, they were granted a charter by Vytautas, under which they formed a class of freemen subject in all criminal cases directly to the jurisdiction of the grand duke and his official representatives, and in petty suits to the jurisdiction of local officials on an equal footing with the lesser nobles (szlachta), boyars, and other free citizens. As a result, the community prospered.

In 1495, they were expelled by Alexander Jagiellon, but allowed to return in 1503. The Lithuanian statute of 1566 placed a number of restrictions on the Jews, and imposed sumptuary laws, including the requirement that they wear distinctive clothing, including yellow caps for men and yellow kerchiefs for women.

The Khmelnytsky Uprising destroyed the existing Lithuanian Jewish institutions. Still, the Jewish population of Lithuania grew from an estimated 120,000 in 1569 to approximately 250,000 in 1792. After the 1793 Second Partition of the Polish-Lithuanian Commonwealth, Lithuanian Jews became subjects of the Russian Empire.

During the German invasion of June 1941, 206,800 Jews were murdered by the Nazis and Lithuanian collaborators.[citation needed] Notable execution locations were in the Paneriai woods (see Ponary massacre) and the Ninth Fort.[citation needed]

Quoting the research done by H. G. Adler into Poland during World War II called Theresienstadt 1941–1945, there were "80,000 Jews conscripted into Poland's independent army prior to the German invasion who identified themselves as Lithuanian Jews". Using different sources Holocaust researchers claim there were between 60,000 and 65,000 Jewish soldiers in Poland's independent army who identified themselves as Lithuanian Jews.[10] 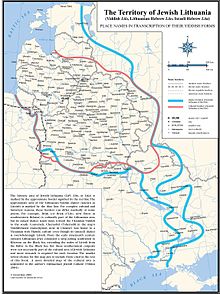 LITVISH. An Atlas of Northeastern Yiddish by Dovid Katz. Cartography by Giedre Beconyte

Litvaks have an identifiable mode of pronouncing Hebrew and Yiddish; this is often used to determine the boundaries of Lita (area of settlement of Litvaks). Its most characteristic feature is the pronunciation of the vowel holam as [ej] (as against Sephardic [oː], Germanic [au] and Polish [oj]).

In the popular perception,[by whom?] Litvaks were considered to be more intellectual and stoic than their rivals, the Galitzianers, who thought of them as cold fish. They, in turn, disdained Galitzianers as irrational and uneducated. Ira Steingroot's "Yiddish Knowledge Cards" devote a card to this "Ashkenazi version of the Hatfields and McCoys".[11] This difference is of course connected with the Hasidic/misnaged debate, Hasidism being considered the more emotional and spontaneous form of religious expression.

The two groups differed not only in their attitudes and their pronunciation, but also in their cuisine. The Galitzianers were known for rich, heavily sweetened dishes in contrast to the plainer, more savory Litvisher versions, with the boundary known as the "Gefilte Fish Line".[12]

The Lithuanian Jewish population may exhibit a genetic founder effect.[13] The utility of these variations has been the subject of debate.[14] One variation, which is implicated in familial hypercholesterolemia, has been dated to the 14th century,[15] corresponding to the establishment of settlements in response to the invitation extended by Gediminas in 1323, which encouraged German Jews to settle in the newly established city of Vilnius. A relatively high rate of early-onset dystonia in the population has also been identified as possibly stemming from the founder effect.[16]