Main article: City proper
The municipality of Chongqing, whose administrative area is around the size of Austria, has the largest population for a city proper. However, more than 70% of its residents actually live in rural areas.

The use of city proper as defined by administrative boundaries may not include suburban areas where an important proportion of the population working or studying in the city lives.[5] Because of this definition, the city proper population figure may differ greatly with the urban area population figure, as many cities are amalgamations of smaller municipalities (Australia), and conversely, many Chinese cities govern territories that extend well beyond the traditional "city proper" into suburban and rural areas.[6] The Chinese municipality of Chongqing, which claims the largest city proper in the world, comprises a huge administrative area of 82,403 km2, around the size of Austria. However, more than 70% of its 30-million population are actually agricultural workers living in a rural setting.[7][8]

A formal local government area comprising the urban area as a whole and its primary commuter areas, typically formed around a city with a large concentration of people (i.e., a population of at least 100,000). In addition to the city proper, a metropolitan area includes both the surrounding territory with urban levels of residential density and some additional lower-density areas that are adjacent to and linked to the city (e.g., through frequent transport, road linkages or commuting facilities). 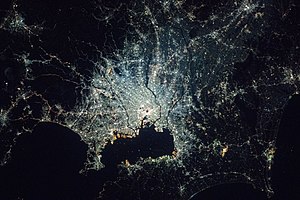 Tokyo is considered the world's largest city, with its urbanisation exceeding its city limits.

A city can be defined as a conditionally contiguous urban area, without regard to territorial or other boundaries inside an urban area. UNICEF[1] defines urban area as follows:

The definition of "urban" varies from country to country, and, with periodic reclassification, can also vary within one country over time, making direct comparisons difficult. An urban area can be defined by one or more of the following: administrative criteria or political boundaries (e.g., area within the jurisdiction of a municipality or town committee), a threshold population size (where the minimum for an urban settlement is typically in the region of 2,000 people, although this varies globally between 200 and 50,000), population density, economic function (e.g., where a significant majority of the population is not primarily engaged in agriculture, or where there is surplus employment) or the presence of urban characteristics (e.g., paved streets, electric lighting, sewerage).

According to Demographia, an urban area is a continuously built up land mass of urban development that is within a labor market (metropolitan area or metropolitan region) and contains no rural land.[12]

There are 81 cities with a population over 5,000,000 people according to the United Nations 2018 estimates. The UN figures are a mixture of city proper, metropolitan area, and urban area. Several cities such as Jakarta and Seoul have significantly larger metropolitan/urban population figures which are excluded on the UN data.[13]