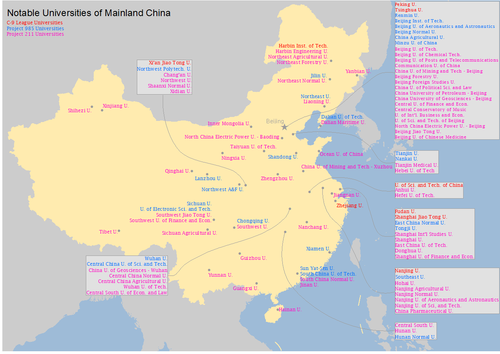 This article is a list of universities in China, which is defined as the People's Republic of China (PRC) in mainland China and Hong Kong and Macau SARs.

By May 2017, there were 2,914 colleges and universities, with over 20 million students enrolled in mainland China.[1] and 156 colleges in the ROC free area. More than 6 million Chinese students graduated from university in 2008.[2] The "Project 211" for creating 100 universities began in the mid-1990s, and has merged more than 700 institutions of higher learning into about 300 universities. Corresponding with the merging of many public universities, has been the rapid expansion of the private sector in mainland China since 1999. Although private university enrollments are not clear, one report listed that in 2006 private universities accounted for around 6 percent, or about 1.3 million, of the 20 million students enrolled in formal higher education in China.[3] The quality of universities and higher education in China is internationally recognized as China has established educational cooperation and exchanges with 188 countries and regions and 46 major international organizations, and signed agreements with 54 countries such as the US, British, Australia and Germany on mutual recognition of higher education qualifications and academic degrees.[4]

The country had the world's second-highest number of top universities, after the United States.[5][6] In 2017, China surpassed the U.S. with the highest number of scientific publications.[7][8]. In the 2020 CWTS Leiden Ranking edition, China surpassed the U.S. with the number of universities including in the ranking for the first time (204 vs.198).[9] China is also home to the two best Asian universities with Tsinghua and Peking Universities, ranked at 20th and 23rd respectively in the world, according to the latest Times Higher Education World University Rankings.[10] China has dominated the QS BRICS University Rankings and the THE's Emerging Economies University Rankings, claiming seven of the top 10 spots for both rankings. China is also the most-represented nation overall.[11][12]

The following notation is used:

The default list should follow the neutral order provided by MOE, namely the numerical order of identification codes.

Leading and time-honored universities in China

Peking University is the first formally established modern national university of China. It was founded as Imperial University of Peking (京師大學堂) in 1898 in Beijing as a replacement of the ancient Guozijian, the national central institute of learning in China's traditional educational system in the past thousands of years. Three years earlier, Sheng Xuanhuai submitted a memorial to Guangxu Emperor to request for approval to set up a modern higher education institution in Tianjin. After approval on 2 October 1895, Peiyang Western Study School (天津北洋西學學堂) was founded by him and American educator Charles Daniel Tenney (丁家立) and later developed to Peiyang University (北洋大學堂). In 1896, Sheng Xuanhuai delivered his new memorials to Guangxu Emperor to make a suggestion that two official modern higher education institutions should be established in Beijing/Tangshan and Shanghai. In the same year, he founded Nanyang Public School (南洋公學) in Shanghai by an imperial edict issued by Guangxu Emperor. The institution initially included an elementary school, secondary school, college, and a normal school. Later the institution changed its name to Jiao Tong University (also known as Chiao Tung University). In the 1930s, the university often referred itself as "MIT in the East"[13][14] due to its reputation of nurturing top engineers and scientists. In the 1950s, part of this university was moved to Xi'an, Shaanxi, and was established as Xi'an Jiaotong University; the part of the university remaining in Shanghai was renamed Shanghai Jiao Tong University. These two universities have developed independently since then, along with the original Beijing Jiaotong University.

Meanwhile, Wuhan University also claimed that its predecessor Ziqiang Institute (自強學堂) was the first modern higher education institution in China. On 29 November 1893, Zhang Zhidong submitted his memorial to Guangxu Emperor to request for approval to set up an institution designed for training students specializing in foreign languages, mathematics, science, and business. After Ziqiang was founded in Wuchang, not only courses in foreign languages was taught, courses in science (chemical and mining courses starting from 1896) and business (business course starting from the very beginning) were also developed at the school.[15] Later, although the school officially changed its name to Foreign Languages Institute (方言學堂) in 1902, the school still offered courses in science and business.[15] In China, there had been some earlier schools specializing in foreign languages learning, such as Schools of Combined Learning in Beijing (京師同文館, founded in 1862[remark 1]), in Shanghai (上海同文館/上海廣方言館, founded in 1863), and in Guangzhou (廣州同文館), founded in 1864, but few provided courses in other fields, which hardly qualified as modern education institutions. Some argued that Wuhan University can only trace its history back to 1913 when the National Wuchang Higher Normal College (國立武昌高等師範學校) was established, but Wuhan University officially recognized its establishment as in 1893, relying on the abundance of historical documentation and the experts' endorsement.[16]

After the Chinese Civil War, parts of some famous universities of mainland China were transferred to the island of Taiwan: notably the National Central University and National Tsing Hua University. As a result, some universities on both sides of the Taiwan Strait share the same names. In the ROC-controlled Fujian, only one university, National Quemoy University was founded in 1997.

China has a number of Sino-foreign cooperative universities, which are legally independent entities formed as joint ventures between Chinese universities and international partners. They include:

Some established rankings in Wikipedia:

Other rankings in external links: