Chinese musical instruments were traditionally grouped into eight categories known as bayin (八音).[1] The eight categories are silk, bamboo, wood, stone, metal, clay, gourd and skin. There are other instruments which may not fit these groups. This is one of the first musical groupings ever devised.

Silk instruments are mostly stringed instruments (including those that are plucked, bowed, and struck). Since ancient times the Chinese have used twisted silk for strings, though today metal or nylon are more frequently used. Instruments in the silk category include:

A mural from the tomb of Xu Xianxiu in Taiyuan, Shanxi province, dated 571 AD during the Northern Qi Dynasty, showing male court musicians playing stringed instruments, either the liuqin or pipa, and a woman playing a konghou (harp)

A half-section of the Song Dynasty (960–1279) version of the Night Revels of Han Xizai, original by Gu Hongzhong;[2] the female musicians in the center of the image are playing transverse bamboo flutes and guan, and the male musician is playing a wooden clapper called paiban.

Most wood instruments are of the ancient variety:

This is a set of muyus or Chinese wooden slit drums. The sound produced is affected by the instrument's size, type of wood, and how hollow it is. 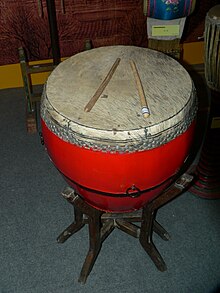 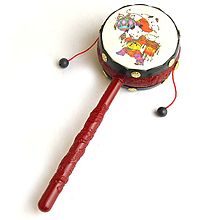 Chinese instruments are either played solo, collectively in large orchestras (as in the former imperial court) or in smaller ensembles (in teahouses or public gatherings). Normally, there is no conductor in traditional Chinese music, nor any use of musical scores or tablature in performance. Music was generally learned aurally and memorized by the musician(s) beforehand, then played without aid. As of the 20th century, musical scores have become more common, as has the use of conductors in larger orchestral-type ensembles.

Musical instruments in use in the 1800s

These watercolour illustrations, made in China in the 1800s, show several types of musical instruments being played: