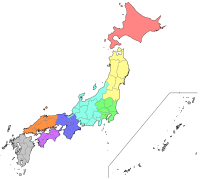 Japan is traditionally divided into eight regions. They are not official administrative units, but are used for regional division of Japan in a number of contexts. For instance, maps and geography textbooks divide Japan into the eight regions, weather reports usually give the weather by region, and many businesses and institutions use their home region as part of their name (Kinki Nippon Railway, Chūgoku Bank, Tōhoku University, etc.).

Each region groups several of the country's 47 prefectures, except for the region of Hokkaidō which corresponds to Hokkaidō Prefecture. Of the four main islands of Japan, three make up a region each while the largest island of Honshū is divided into five regions. Okinawa Prefecture is usually included in Kyūshū, but is sometimes treated as its own ninth Okinawa region.[citation needed]

While Japan has eight High Courts, their jurisdictions do not correspond to the eight traditional regions below. (See Judicial system of Japan for details).