The meaning of the phrase is context sensitive, and has varied over time, like the difference between "strategy" and "tactics".[1]

The cavalry charge is a quintessential offensive military tactic 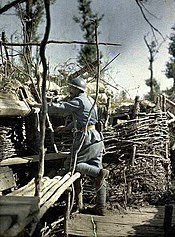 Defensive trenches were used commonly during World War I