This is a list of diplomatic missions of Germany. Historically, the German state of Prussia and several smaller German states had sent emissaries abroad prior to the establishment of the North German Confederation, the precursor to the modern Federal Republic of Germany.

In 1874, Germany had only four embassies (in London, Paris, Saint Petersburg, and Vienna), but this was complemented by non-ambassadorial representation in the form of 14 ministerial posts (in Athens, Bern, Brussels, The Hague, Constantinople, Copenhagen, Lisbon, Madrid, Rome, Stockholm, Peking, Rio de Janeiro, Washington, D.C., and to the Holy See), seven consulates-general with diplomatic status (in Alexandria, Belgrade, Bucharest, London, New York, Budapest, and Warsaw), and 37 consulates and vice-consulates headed by consular officers. By 1914, five additional embassies were established in Constantinople, Madrid, Rome, Washington, D.C., and Tokyo. The Foreign Office progressively reformed itself at this time to serve Germany's rising commercial and colonial interests abroad, as well as to reflect the professionalization of diplomacy generally.

Politics of the Third Reich affected the Foreign Office. In 1935 the Reich Citizenship Act led to the forced retirement of over 120 tenured civil servants. Positions and structures were created to imbed NSDAP representatives, and the SS began to be posted abroad as "police attachés". Under Joachim von Ribbentrop the Reich Foreign Ministry grew from 2,665 officers in 1938 to a peak of 6,458 in 1943, despite missions abroad closing as a consequence of the Second World War.

Germany's post-war diplomatic network started as early as 1949 with a mission in Paris to the newly formed Organisation for Economic Co-operation and Development. The following year consulates-general were (re)opened in London, New York City, Paris, Istanbul, Amsterdam, Brussels, Rome, and Athens (until 1951 these were not embassies, as by virtue of the Occupation Statute the three allied powers had competence of foreign affairs; these consulates were intended to just manage commercial and consular affairs). West Germany's Federal Foreign Office grew, and by the time of Germany's reunification in 1990, there were 214 diplomatic missions abroad. Following German reunification, the Federal Republic inherited several diplomatic representations of the Ministry for Foreign Affairs of former East Germany.[1]

The West German embassy in Stockholm was occupied by the Red Army Faction in 1975. In 1989 its embassies in Budapest and Prague sheltered fleeing East Germans while waiting for permission to travel onwards to West Germany; permission was subsequently given by the Czechoslovakian and Hungarian governments, accelerating the collapse of socialist hegemony in Eastern Europe.

Germany "assists" Sweden in its duties as protecting power for several Western states in North Korea "when necessary". 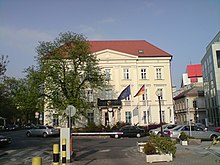 Embassy of Germany in Canberra

German Embassy in The Hague 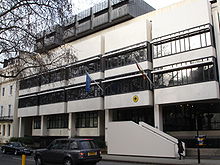 Embassy of Germany in Mexico City 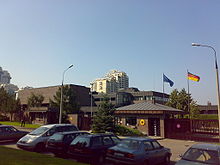 Embassy of Germany in Moscow 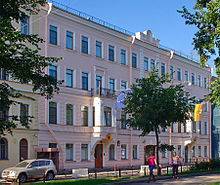 German Embassy in Port of Spain

Embassy of Germany in Prague

Building of the German and the British Embassy in Reykjavík 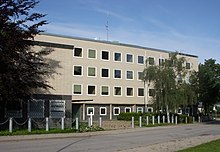 Embassy of Germany in Tallinn

Consulate-General of Germany in San Francisco

Embassy of Germany in Wellington

Currently, there are no German diplomatic missions (but in some cases honorary consuls) in :

When in a non-EU country where there is no German embassy, German citizens as EU citizens have the right to get consular protection from the embassy of any other EU country present in that country.

Germany regularly publishes travel warnings on the website of the Auswärtiges Amt (Federal Foreign Office) to its citizens. The Office allows German citizens to register online in a special list, the Krisenvorsorgeliste ("Crisis-Prevention List") before they travel abroad (Elektronische Erfassung von Deutschen im Ausland [ELEFAND] Electronic Registration of Germans Being Abroad). With a password, the registered persons can change or update their data. The registration is voluntary and free of charge. It can be used for longer stays (longer than 6 months), but also for a vacation of only two weeks. The earliest date of registration is 10 days before the planned trip.

Worldwide travel warning in 2020 due to the coronavirus pandemic

On April 17, 2020, the German Auswärtiges Amt (Federal Foreign Office) published a worldwide travel warning on its website and advised German citizens not to take unnecessary trips abroad.
Meanwhile (July 2020), the warning has been revoked for other EU countries, the EFTA countries, and the microstates (Andorra, Monaco, San Marino, and Vatican City).
The German Government advises its citizens against traveling to Ireland, Malta, and the United Kingdom because of their strict quarantine prescriptions.
On its website, the Auswärtiges Amt will regularly update travel information.