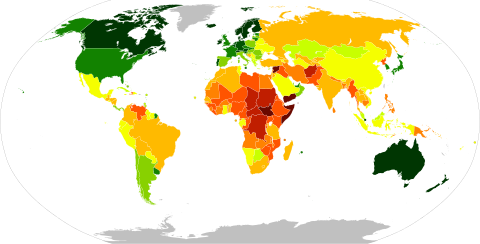 This is a list of countries by order of appearance in the Fragile States Index (formerly the Failed States Index) of the United States think tank Fund for Peace.

A fragile state has several attributes. Common indicators include a state whose central government is so weak or ineffective that it has little practical control over much of its territory; non-provision of public services; widespread corruption and criminality; refugees and involuntary movement of populations; and sharp economic decline.[1] Since 2005, the index has been published annually by the Fund for Peace and the magazine Foreign Policy. The list has been cited by journalists and academics in making broad comparative points about countries or regions.[2][3]

This is the list for 2020,[4] with comparisons of each country's current score to previous years' indices.

The report uses 12 factors to determine the rating for each nation, including security threats, economic implosion, human rights violations and refugee flows.

Indicators of a fragile state

The following factors are used by Fund For Peace to ascertain the status of a country.[5]

Most improved and worsened countries

Following are the most improved and worsened countries in FSI 2019.[6] As per J.J. Messner, the executive director of the Fund for peace, countries improve at different paces and eventually face setbacks. However on average, world has been becoming less fragile every year.