Advertisement - You can get this game from STEAM
Wikipedia list article 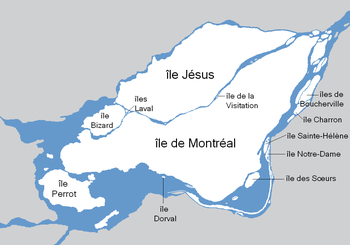 Bridges are required to connect Montreal to the mainland (gray).

Like most major cities, Montreal needs easy highway access from its suburbs and surrounding areas. However, because Montreal was built on an island surrounded by three rivers, it can be entered by land only on a bridge or through a tunnel. Although the city was founded in 1642,[1] it was not until 1847 that the first fixed link to the outside was established when a wooden bridge was built across Rivière des Prairies to Île Jésus, on the site of what is now Ahuntsic Bridge. Another bridge was built immediately afterward, a few kilometers (miles) west, which became Lachapelle Bridge, and another in 1849, Pont des Saints-Anges, to the east.[2] The latter bridge collapsed in the 1880s and was never rebuilt.[2]

With the advent of the railroad, Montreal got a fixed link to the mainland; in 1854 railroad bridges were built in Sainte-Anne-de-Bellevue, across both channels of the Ottawa River, linking Montreal Island to Ontario and the Vaudreuil-Soulanges peninsula through Perrot Island.[3] In 1860, Montreal got its first link to the South Shore with the construction of Victoria Bridge, which was, at the time of its opening, the longest bridge in the world.[4] Indirect links to the North Shore also had to wait for railroad construction, but this took longer; the Canadian Pacific Railway opened its link to Saint-Jérôme in 1876, through Île Jésus.[2]

This list of bridges and other fixed links serving the Island of Montreal proceeds counter-clockwise around the island from southwest, at the exit of Lake Saint-Louis, downstream along the St. Lawrence River, then upstream along Rivière des Prairies all the way to Lake of Two Mountains, then downstream again along the East Channel of the Ottawa River until it reaches Lake Saint-Louis. The year of construction is that of the structure currently in place, accompanied by the year of construction of the original structure if the current one replaced an older span.

The crossing of the Saint Lawrence River has always proved problematic for engineers due to width, depth, currents, and ice cover. The construction of Victoria Bridge for the Grand Trunk Railway, which, at 2 kilometres (1.2 mi), was the longest bridge in the world when it first opened in 1860,[4] highlighted the problems presented by this natural obstacle.[5] Not to be outdone by its rival, however, the Canadian Pacific Railway built its own span, the Saint-Laurent Railway Bridge, upstream from the Lachine Rapids in 1886[6] for which the Mohawks of Kahnawake were hired to erect the steel superstructure.[7] Although Victoria Bridge was also used as a road crossing since 1898, it was not before the 1930s that two fully dedicated road bridges, Jacques-Cartier and Mercier, were built.[8][9] More spans, including Louis-Hippolyte Lafontaine Bridge–Tunnel and Champlain Bridge, were built in the 1960s.[10][11] No new structure has been built since, and none of the existing crossings have been upgraded or widened. A multibillion-dollar project to replace the Champlain Bridge is currently underway.

The construction of the Saint Lawrence Seaway in the 1950s required extensive modifications for all spans that existed at the time. Those are not reflected in the table below.

Although the Rivière des Prairies is much smaller than the Saint Lawrence, bridge construction there did not begin until the 1840s—when rapid construction began on three wooden toll bridges to what is now Laval, one of which, Pont des Saints-Anges, collapsed in the 1880s and was never rebuilt.[2] The existence of regular ferry services across the river is attested from 1813,[15] but these ferries were discontinued when the bridges opened. The first railroad across the river was opened in 1876, and the Bordeaux Railway Bridge is the oldest fixed link to Laval that is still standing. (Another bridge across Rivière des Mille Îles, which was part of the same line, collapsed in 1882 but was immediately rebuilt.[2]) The highway construction boom of the 1960s and 1970s led to the construction of four new freeway bridges across the river, and the upgrading of the existing Pie IX Bridge to freeway standards.[2]

The first railway bridge to Montreal Island was the Grand Trunk Railway bridge across the Ottawa River East Channel. Along with another bridge built simultaneously across the West Channel, this bridge provided the first fixed link from Montreal to the mainland.[3] It was not until 1925, however, that a fixed road link, formed by Galipeault Bridge and Taschereau Bridge, was built across the Ottawa River from Montreal Island.[31] Perrot Island was the only way out of Montreal to the West before the construction of Île aux Tourtes Bridge, which goes directly to Vaudreuil across the Lake of Two Mountains.[31]

All three spans across the Ottawa River East Channel are twinned by another span, built simultaneously, across the West Channel.

A The section of Honoré-Mercier bridge spanning over the St. Lawrence Seaway was rebuilt to seaway standards in the 1950s. The bridge was twinned by an identical one, on the downriver side, which opened in 1963.[9]

B The Champlain Bridge Ice Structure, known in French as "l'Estacade Champlain," was built to control ice floes coming from the Laprairie Basin.[12]

C At the north end of Champlain Bridge, two spans, one north-south (aut. 15 and 20) and one east-west (aut. 10) connect Île des Sœurs to I. of Montreal. These two spans, called Pont Île-des-Sœurs and Pont Clément, are part of the Champlain Bridge complex.[10]

F Jacques-Cartier Bridge was originally named Harbour Bridge/Pont du Havre, and renamed after Jacques Cartier in 1934 (400th anniversary of Cartier's first voyage). The section over the St. Lawrence Seaway was lifted to a new height in 1962.[8]

G The Louis-Hippolyte Lafontaine complex consists of a tunnel from Montreal to Île Charron and a bridge from Île Charron to the South Shore.[11]

H Construction of the Highway 25 Bridge started in early 2008 and was finished in May 2011. It is a toll bridge.

J The railway crossing at Île Bigras consists of two spans, one north and one south of Île Bigras.

K A structure known as "Île Bray Bridge" was abandoned while still under construction in favor of Île aux Tourtes Bridge.[31]

L Galipeault Bridge was first built in 1925 and doubled in 1964. Both spans have been replaced since. Taschereau Bridge, which was part of the same project, spans the West Channel along the same highway.[31]