List of presidents of the Institution of Civil Engineers 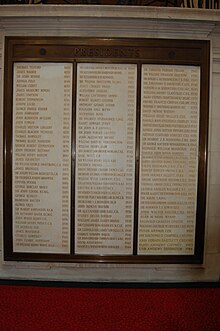 Plaque listing the early presidents, on the main staircase at the Institution's headquarters, One Great George Street

This is a list of presidents of the Institution of Civil Engineers (ICE). The president's role is to represent the institution and to promote the profession to the public. The first president was Thomas Telford who had the office bestowed upon him for life in recognition of his contributions to the civil engineering profession. It became a biennial office with the election of Sir William Cubitt in 1849 and an annual office with the election of Sir George Berkley in 1891, which it has remained since.

On 18 December 1956 Harold Gourley died just six weeks after assuming the office in November.[1] Gourley was the first regularly elected president to die in office (Telford, who was elected president for life, died in office) and the ICE council, who were authorised to fill any vacancy except that of President, were forced to call a Special General Meeting of members.[1] As a result of this meeting, Sir Frederick Arthur Whitaker was elected to the position in February 1957 and was allowed to serve out the remainder of Gourley's term in addition to his own full term.[2] Subsequent deaths-in-office saw Sir Herbert Manzoni succeed Arthur Hartley in February 1960; and Tony Ridley succeed Edmund Hambly in March 1995.

The first female president, Jean Venables, was elected in May 2008. The current president is Paul Sheffield.