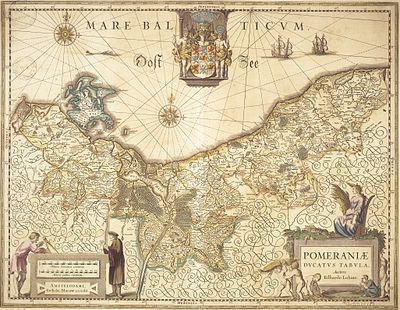 Map of the historical Duchy of Pomerania from the 17th century

This is a list of the duchies and dukes of Pomerania.

Dukes of the Slavic Pomeranian tribes (All Pomerania)

The lands of Pomerania were firstly ruled by local tribes, who settled in Pomerania around the 10th and 11th centuries.

The Duchy resulted from the partition of Świętobor, Duke of Pomerania, in which his son Wartislaw inherited the lands that would become in fact known as Pomerania.

In 1155, Pomerania was divided in Pomerania-Stettin and Pomerania-Demmin. In the struggle to shake off Polish and Danish claims to feudal overlordship, Pomerania approached the Holy Roman Empire. In 1181, while staying in the camp outside the walls of Lübeck, Emperor Frederick I Barbarossa recognised Bogislaw I as duke of S(c)lavia, as it was called in the document.[1] However, three years later in the Battle in the Bay of Greifswald (1184) the Danish Canute VI forced Pomerania to accept him as liege lord.[2] In 1190 the Land of Słupsk-Sławno separated itself from -Stettin. With the deafeat of Denmark in the Battle of Bornhöved (1227) Pomerania shook off the Danish liege-lordship.[3]

In 1231 Emperor Frederick II granted the immediate liege lordship over Pomerania to the Margrave of Brandenburg, who enforced this claim by the Treaties of Kremmen (1236) and of Landin (1250). Thus Pomerania had become a fief of Brandenburg, thus an only mediate (indirect) subfief of the Empire, with Brandenburg itself being an immediate imperial fief.

In 1227, Stolp came to Pomerelia, Schlawe to Pomerania. In 1238–1316 both became part of Pomerelia, ruled by an autonomously acting dynasty of castellans, the Swenzones (German: Swenzonen, entering history in 1257 with Swenzo the Elder). In 1316, the area became part of the Pomerania-Wolgast, first as a pawn from Brandenburg, and definitively in 1347.

After Wartislaw III died heirless in 1264, Barnim I became sole duke of the whole duchy. After Barnim's death, the duchy was to be ruled by his sons Barnim II, Otto I and Bogislaw IV. The first years, Bogislaw, being the eldest, ruled in place of his too young brothers.

In 1459, the eastern partitions of Pomerania-Wolgast around Stargard and Stolp ceased to exist. In 1478, after 200 years of partition, the duchy was reunited for a short period when all her parts were inherited by Bogislaw X. By the Treaty of Pyritz in 1493 Pomerania shook off the Marcher liege lordship and became again an immediate imperial estate, after new disputes finally confirmed by the Treaty of Grimnitz in 1529, both treaties provided Brandenburg succession in case the Pomeranian dukes would become extinct in the male line.

Definitive reunification and annexation to Sweden

In 1625, Bogislaw XIV reunited all Pomerania under his rule. However, in 1637, Sweden hold western parts of Pomerania (Hither Pomerania), originally including Stettin, legalised by the Peace of Westphalia in 1648 (Swedish Pomerania, several times reduced in favour of Brandenburgian Pomerania). Between 1637 and 1657 Lauenburg-Bütow Land came to Poland, thereafter to Brandenburg. In 1648, Brandenburg prevailed in the Peace of Westphalia with its claim only for eastern parts of Pomerania (Farther Pomerania), with the Brandenburg electors officially holding simultaneously the title of dukes of Pomerania until 1806 (end of the Empire and its enfeoffments), but de facto integrating their Pomerania into Brandenburg-Prussia, making it one of the provinces of Prussia in 1815, then including former Swedish Pomerania.

Dukes of Pomerania: the House of Griffins

Partitions of Pomerania under Griffins rule

(Note: Here the numbering of the dukes is the same for all duchies, as all were titled Dukes of Pomerania, despite of the different parts of land or particular numbering of the rulers. The dukes are numbered by the year of their succession.)

In 1155, the lands which belonged to Świętopełk I became independent under Sobieslaw I, a possible descendant, who founded the House of Sambor and the Duchy of Pomerelia.

Partitions of the Duchy of Pomerelia

In 1215, the duchy was divided in other smaller duchies: Gdańsk, Białogarda, Lubiszewo and Świecie.