Alberta provincial electoral districts are currently single member ridings that each elect one member to the Legislative Assembly of Alberta. There are 87 districts fixed in law in Alberta. 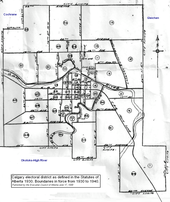 The original twenty five districts were drawn up by Liberal Member of Parliament Frank Oliver prior to the first general election of 1905. The original boundaries were widely regarded as being gerrymandered to favor the Alberta Liberal Party, although the Liberal Party did receive the majority of votes in the 1905 election and thus rightly formed majority government. Every boundary redistribution since 1905 has been based on the original boundaries, with districts being split or merged.

From 1905 to 1926 with only a few exceptions each district elected a single member on the First Past the Post system. Calgary and Edmonton as well as Medicine Hat were elected on a plurality block vote, where each voter could cast as many votes as seats to be filled.

There have also been a couple of cases where members were elected outside of the geographical districts and did not represent any districts. Such was the case in the world wars when Albertans serving overseas voted for their own representatives.

From 1924 to 1956 Calgary and Edmonton MLAs were elected in multiple-member districts encompassing whole cities that used Single Transferable Vote to elect five to seven members. In 1926, Medicine Hat was a two-member district. Outside these cities single-member districts elected single MLAs using the Alternative Voting system, with vote transfers taking place only if no candidate had a majority of the vote. By-elections in the two big cities during this period were conducted using Alternative Voting. Under STV, some results were known as soon as the first vote count was done, but some seats took a couple days of vote transfers to fill. But the mixed representation elected in each city under STV, reflective of the mixed sentiment of the city's voters, was thought worth the wait.

With Alberta in a population boom in the fifties and Calgary and Edmonton growing, single transferable vote was seen as too complicated, with vote counting taking days before final results could be announced. The Social Credit government felt threatened by the growing number of opposition MLAs being elected, and in 1959 returned Alberta to First past the post elections in single-member districts. No government has since changed the electoral system.

In 1977 Elections Alberta was established as an independent, non-partisan office of the Legislative Assembly responsible for administering provincial elections, by-elections and referenda.

The early 1990s proved to be a contentious period for delineation of electoral districts in Alberta. The Supreme Court of British Columbia ruling in Dixon v. Attorney General of British Columbia in 1989 invalidated the provincial electoral district re-distribution due to wide variations between electoral district populations for British Columbia, finding these differences inconsistent with the Charter of Rights and Freedoms.[1] Cognizant of this the Alberta Legislature tasked a Special Committee chaired by Taber-Warner MLA Bob Bogle to evaluate the re-distribution of electoral districts in the province. The Report of the Select Special Committee on Electoral Boundaries was submitted to the Legislature in November 1990[2] and was referred to the Court of Appeal of Alberta. While the Court of Appeals reference found the boundaries consistent with the Charter,[3] the report was scrapped and amendments to the Electoral Divisions Act were introduced in early 1991 to effectively "Charter-proof" the new districts.[4]

The same Select Committee was tasked with creating the new report which was presented to the Legislature in November 1992,[5] and once again referred to the Court of Appeal of Alberta to rule on the constitutional validity of the boundaries. The four Progressive Conservative MLAs on the Select Committee (Bob Bogle, Stockwell Day, Pat Nelson, Mike Cardinal) participated fully in developing the report, while the Opposition refused to appoint any MLAs.[4] Subsequently the boundaries were implemented and used for the June 1993 Alberta general election. The Court of Appeal of Alberta withheld Charter condemnation, but found numerous issues with the process and requirements put forward for the re-distribution. In particular the members of the Select Committee were unable to provide sufficient rationale to the court for a number of the boundaries and district sizes recommended in the report.[4] The court explicitly voiced the opinion that a proper electoral boundary review was necessary within the term of the present government (which would expire in 1997).[6]

Like the federal districts in Alberta, urban ridings traditionally begin with the city name. This has generally applied where an urban area is divided and joined with rural areas, such as Grande Prairie-Wapiti and Fort McMurray-Lac La Biche. Notable exceptions are Cypress-Medicine Hat and Brooks-Medicine Hat, which follow the convention in other rural areas of listing communities in alphabetical order (another exception being Vermilion-Lloydminster-Wainwright).

Unlike federal practice, Alberta uses hyphens to join all name elements. This is true for electoral districts named for multiple communities as well as urban districts (where the city name is followed by a direction, a neighbourhood, a landmark, or the name of a historical politician). For example, compare the provincial Fort McMurray-Conklin with the federal Fort McMurray—Cold Lake, where the em dash is used instead of the hyphen to join names of separate communities. Also compare the provincial Edmonton-Strathcona with the federal Edmonton Strathcona, where a space indicates that Strathcona is a neighbourhood of Edmonton.

In addition, Edmonton-McClung is named for suffragette and MLA Nellie McClung. The abolished riding of Edmonton-Roper was named for CCF leader Elmer Roper.

Districts prior to 2019 election

* District has been abolished and re-established.