Lira is a city in the Northern Region of Uganda. It is the main municipal, administrative, and commercial centre of Lira District.[3]

Lira was one of the last towns in Uganda held by loyalists of Idi Amin during the Uganda–Tanzania War (1978–1979). A force consisting of the Tanzania People's Defence Force's 201st Brigade and the Uganda National Liberation Front's Kikosi Maalum attacked Lira on 15 May 1979, ousting the Amin loyalists after a short battle. The clash at Lira was the last important battle of the Uganda–Tanzania War, as the remnants of Amin's army completely disintegrated thereafter.[4] 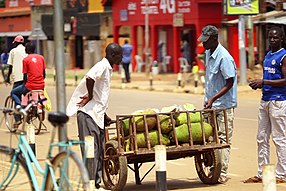 A man selling jackfruit along the road in Lira, Uganda

Lira is served by a railway station of the Uganda Railways network.[11] The city is also served by a public civilian airport, Lira Airport, administered by the Civil Aviation Authority of Uganda.

An 80 kilometres (50 mi) 132 kilovolt electricity line from the Karuma Power Station is under construction to a substation in Lira, under the supervision of Intec Gopa International Energy Consultants GmbH of Germany.[12]

The following additional points of interest lie within the town limits or close to the edges of the city: