Born in Cornwall, Ontario, the son of former Cornwall mayor Joseph E. Chevrier, he was educated in Cornwall, at the University of Ottawa, the University of Montreal and Osgoode Hall. Chevrier was called to the bar in 1928 and was named King's Counsel in 1939. He married Lucienne Brûlé in 1932. He was first elected as a Liberal candidate in the Ontario riding of Stormont in the 1935 federal election. He was re-elected in the 1940, 1945, 1949, and 1953 elections. He resigned in 1954, when he was appointed the first president of the Saint Lawrence Seaway Authority. Returning to politics, he was elected in the 1957 election in the Quebec riding of Laurier. He was re-elected in the 1958, 1962, and 1963 elections. 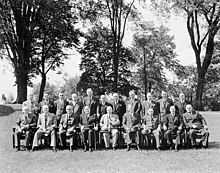 He resigned from the House of Commons in 1964 to become the Canadian High Commissioner in London. He held that position until 1967.