The Linnean Society of London is a learned society dedicated to the study and dissemination of information concerning natural history, evolution, and taxonomy. It possesses several important biological specimen, manuscript and literature collections and publishes academic journals and books on plant and animal biology. The society also awards a number of prestigious medals and prizes.

A product of the 18th-century enlightenment, the Society is the oldest extant biological society in the world, and is historically important as the venue for the first public presentation of the theory of evolution on 1 July 1858.

The patron of the society is Queen Elizabeth II. Honorary members include Emeritus Emperor Akihito of Japan, King Carl XVI Gustaf of Sweden (both of whom have active interests in natural history), and the eminent naturalist and broadcaster Sir David Attenborough.[2] 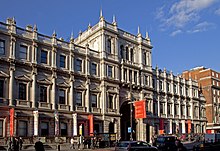 Burlington House: the Linnean Society occupies the range to the left of, and above, the entrance arch. 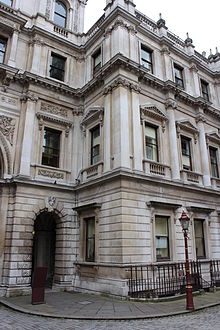 The Society's premises in Burlington House seen from within the courtyard.

The first admission of women as fellows of the society in 1905, Emma Louisa Turner is on the far left, Lilian J. Veley is shown signing the membership book, whilst Lady Crisp receives the 'hand of Fellowship' from the president, William Abbott Herdman, behind Lilian J. Veley and standing is Constance Sladen - from a painting by James Sant (1820–1916) 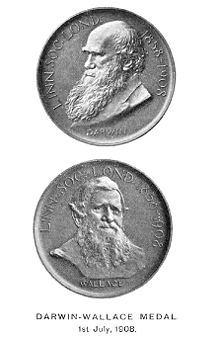 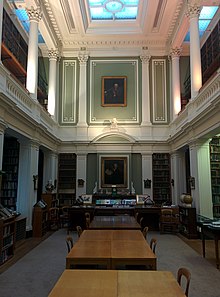 The library of the Linnean Society, Burlington House 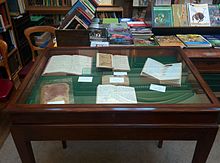 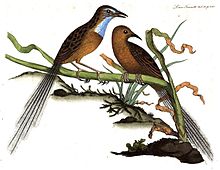 The Linnean Society was founded in 1788 by botanist Sir James Edward Smith. The society takes its name from the Swedish naturalist Carl Linnaeus, the 'father of taxonomy', who systematised biological classification through his binomial nomenclature. He was known as Carl von Linné after his ennoblement, hence the spelling 'Linnean', rather than 'Linnaean'. The society had a number of minor name variations before it gained its Royal Charter on 26 March 1802, when the name became fixed as "The Linnean Society of London". In 1802, as a newly incorporated society, it comprised 228 fellows. It is the oldest extant natural history society in the world.[3] Throughout its history the society has been a non-political and non-sectarian institution, existing solely for the furtherance of natural history.[4]

The inception of the society was the direct result of the purchase by Sir James Edward Smith of the specimen, book and correspondence collections of Carl Linnaeus. When the collection was offered for sale by Linnaeus's heirs, Smith was urged to acquire it by Sir Joseph Banks, the eminent botanist and President of the Royal Society. Five years after this purchase Banks gave Smith his full support in founding the Linnean Society, and became one of its first Honorary Members.[5]

The society has numbered many prominent scientists amongst its fellows. One such was the botanist Robert Brown, who was Librarian, and later President (1849-1853); he named the cell nucleus and discovered Brownian motion.[6] In 1854 Charles Darwin was elected a fellow; he is undoubtedly the most illustrious scientist ever to appear on the membership rolls of the society.[7] Another famous fellow was biologist Thomas Huxley, who would later gain the nickname "Darwin's bulldog" for his outspoken defence of Darwin and evolution. Men notable in other walks of life have also been fellows of the society, including the physician Edward Jenner, pioneer of vaccination, the Arctic explorers Sir John Franklin and Sir James Clark Ross, colonial administrator and founder of Singapore, Sir Thomas Stamford Raffles and Prime Minister of Britain, Lord Aberdeen.[8]

Since 1857 the society has been based at Burlington House, Piccadilly, London; an address it shares with a number of other learned societies: the Geological Society of London, the Royal Astronomical Society, the Society of Antiquaries of London and the Royal Society of Chemistry.[9]

The first public exposition of the 'Theory of Evolution by Natural Selection', arguably the greatest single leap of progress made in biology, was presented to a meeting of the Linnean Society on 1 July 1858. At this meeting a joint presentation of papers by Charles Darwin and Alfred Russel Wallace was made, sponsored by Joseph Hooker and Charles Lyell as neither author could be present.[10]

In 1904 the society elected its first female fellows, following a number of years of tireless campaigning by the botanist Marian Farquharson. Whilst the society's council was reluctant to admit women, the wider fellowship was more supportive; only 17% voted against the proposal. Among the first to benefit from this were the ornithologist and photographer Emma Louisa Turner, Lilian J. Veley, a microbiologist and Annie Lorrain Smith, a lichenologist and mycologist, all formally admitted on 19 January 1905.[11] Also numbered in the first cohort of women to be elected in 1904, was the paleobotanist, and later pioneer of family planning, Marie Stopes, the philanthropist Constance Sladen, founder of the Percy Sladen Memorial Trust and Alice Laura Embleton (1876 – 1960), biologist, zoologist and suffragist, who had been one of the earliest women to deliver a paper to the society on on 4 Jun 1903.[12][13][14][15]

The society's connection with evolution remained strong into the 20th century. Sir Edward Poulton, who was President 1912-1916, was a great defender of natural selection, and was the first biologist to recognise the importance of frequency-dependent selection.[16][17]

In April 1939 the threat of war obliged the society to relocate the Linnean collections out of London to Woburn Abbey in Bedfordshire, where they remained for the duration of World War II. This move was facilitated by the 12th Duke of Bedford, a Fellow of the Linnean Society himself. Three thousand of the most precious items from the library collections were packed up and evacuated to Oxford; the country house of librarian Warren Royal Dawson provided a refuge for the society's records.[18]

The first female President of the society was Irene Manton (1973 to 1976), who pioneered the biological use of electron microscopy. Her work revealed the structure of the flagellum and cilia, which are central to many systems of cellular motility.[19][20]

Recent years have seen an increased interest within the society in issues of biodiversity conservation. This was highlighted by the inception in 2015 of an annual award, the John Spedan Lewis Medal, specifically honouring persons making significant and innovative contributions to conservation.[21]

Fellowship requires nomination by at least one fellow, and election by a minimum of two thirds of those electors voting. Fellows may employ the post-nominal letters 'FLS'. Fellowship is open to both professional scientists and to amateur naturalists who have shown active interest in natural history and allied disciplines. Having authored relevant publications is an advantage, but not a necessity, for election. Following election, new fellows must be formally admitted, in person at a meeting of the society, before they are able to vote in society elections. Admission takes the form of signing the membership book, and thereby agreeing to an obligation to abide by the statutes of the society. Following this the new fellow is taken by the hand by the president, who recites a formula of admission to the fellowship. Other forms of membership exist: 'Associate', for supporters of the society who do not wish to submit to the formal election process for fellowship, and 'Student Associate', for those registered as students at a place of tertiary education. Associate members may apply for election to the fellowship at any time. Finally, there are three types of membership that are prestigious and strictly limited in number: 'Fellow honoris causa', 'Foreign', and lastly, 'Honorary'. These forms of membership are bestowed following election by the fellowship at the annual Anniversary Meeting in May.[22][23]

Meetings have historically been, and continue to be, the main justification for the society's existence. Meetings are venues for people of like interests to exchange information, talk about scientific and literary concerns, exhibit specimens, and listen to lectures. Today, meetings are held in the evening and also at lunchtime. Most are open to the general public as well as to members, and the majority are offered without charge for admission.[24]

On or near the 24th of May, traditionally regarded as the birthday of Carl Linnaeus, the Anniversary Meeting is held. This is for fellows and guests only, and includes ballots for membership of the council of the society and the awarding of medals.[25] On May 22nd 2020, for the first time in its history, the Anniversary Meeting was held online via videotelephony. This was due to restrictions on public gatherings imposed in response to the COVID-19 pandemic.

The Linnean Society of London aims to promote the study of all aspects of the biological sciences, with particular emphasis on evolution, taxonomy, biodiversity, and sustainability. Through awarding medals and grants, the society acknowledges and encourages excellence in all of these fields.[26][27]

The following medals and prizes are awarded by the Linnean Society:

Linnaeus' botanical and zoological collections were purchased in 1783 by Sir James Edward Smith, the first President of the society, and are now held in London by the society.[28] The collections include 14,000 plants, 158 fish, 1,564 shells, 3,198 insects, 1,600 books and 3,000 letters and documents. They may be viewed by appointment and there is a monthly tour of the collections.[29]

Smith's own plant collection of 27,185 dried specimens, together with his correspondence and book collection, is also held by the society.[30]

Other notable holdings of the society include the notebooks and journals of Alfred Russel Wallace and the paintings of plants and animals made by Francis Buchanan-Hamilton (1762–1829) in Nepal.[31]

In December 2014, the society's specimen, library, and archive collections were granted designated status by the Arts Council England, recognising collections of national and international importance (one of only 148 institutions so recognised as of 2018).[32]