Lingerie displayed as for point-of-sale promotion

Lingerie (UK: /ˈlæ̃ʒəri, ˈlɒn-, -ʒəreɪ/, US: /ˌlɒnʒəˈreɪ, ˌlænʒəˈriː/[1]; French: [lɛ̃ʒ.ʁi]) is a category of primarily women's clothing including undergarments (mainly brassieres), sleepwear, and lightweight robes. The specific choice of the word is often motivated by an intention to imply that the garments are alluring, fashionable or both.[citation needed] In a 2015 US survey 75% of women and 26% of men reported having worn sexy lingerie in their lifetime.[2]

Lingerie is made of lightweight, stretchy, smooth, sheer or decorative fabrics such as silk, satin, Lycra, charmeuse, chiffon, or (especially and traditionally) lace. These fabrics can be made of natural fibres like silk or cotton or of synthetic fibres like polyester or nylon.

The concept of lingerie is a visually appealing undergarment that was developed during the late nineteenth century. Lady Duff-Gordon of Lucile was a pioneer in developing lingerie that freed women from more restrictive corsets. Through the first half of the 20th century, women wore underwear for three primary reasons: to alter their outward shape (first with corsets and later with girdles or brassieres), for hygienic reasons and for modesty. Before the invention of crinoline, women's underwear was often very large and bulky.

During the late 19th century, corsets became smaller, less bulky and more constricting and were gradually supplanted by the brassiere, first patented in the 20th century by Mary Phelps Jacob. When the First World War broke out, women found themselves filling in men's work roles, creating a demand for more practical undergarments. Manufacturers began to use lighter and more breathable fabrics. In 1935, brassières were updated with padded cups to flatter small breasts and three years later underwire bras were introduced that gave a protruding bustline. There was also a return to a small waist achieved with girdles. The 1940s woman was thin, but had curvaceous hips and breasts that were pointy and shapely. In the 1960s, the female silhouette was liberated along with social mores. The look was adolescent breasts, slim hips, and extreme thinness. André Courrèges was the first to make a fashion statement out of the youth culture when his 1965 collection presented androgynous figures and the image of a modern woman comfortable with her own body.[6]

As the 20th century progressed, underwear became smaller and more form fitting. In the 1960s, lingerie manufacturers such as Frederick's of Hollywood begin to glamorise lingerie. The lingerie industry expanded in the 21st century with designs that doubled as outerwear. The French refer to this as 'dessous-dessus,' meaning something akin to innerwear as outerwear.[7]

The lingerie market at the turn of the 21st century was driven by the advent of modern technologies and fabrics that help in designing innovative products such as laser-cut seamless bras and moulded T-shirt bras. Designers are putting greater emphasis on rich-looking fabrics, laces, embroideries and brighter colours.[citation needed]

The global lingerie market in 2003 was estimated at $29 billion, while in 2005, bras accounted for 56 percent of the lingerie market and briefs represented 29 per cent. The United States’s largest lingerie retailer, Victoria's Secret,[8] operates almost exclusively in North America, but the European market is fragmented, with Triumph International and DB Apparel predominant.[9] Also prominent are French lingerie houses, including Chantelle, Aubade and Simone Pérèle, each with a long history and a commitment to innovation and French style.[citation needed] Since the mid-1990s, women have had more choice in bra sizes; the focus has changed from choosing bras in an average size to wearing bras that actually fit perfectly. In the UK, for instance, the media are fuelling an awareness campaign about the need for each woman to have a proper bra fitting before every purchase.[citation needed]

In March 2020 the Guardian reported a trend for male lingerie on the catwalk and predictions as to the likelihood of it successfully extending to the high street fashion stores.[10]

Woman in a two-piece lingerie consisting of bra and panty 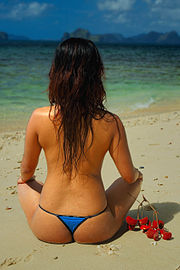 Woman at a beach in G-string